Particle Image Velocimetry (PIV) is a laser based-technique that uses light scattered by tracer particles immersed in the flow to extract the velocity of the fluid. In its simplest realization, two dimensional PIV, it uses a thin laser sheet to illuminate a region of the flow. Light scattered by the tracer particles crossing through that region is captured by a digital camera with its optical axis perpendicular to the laser plane. By firing two laser pulses in quick succession and synchronizing the camera shutter with the laser pulses, two images of the tracer particles at different locations in the flow are recorded within a small time interval. A statistical correlation of the light intensity field in the two images is used to compute the local displacement of the particles in the flow. By dividing these displacements by the time interval between the two images (the delay between the firing of the two laser pulses) we obtain the velocity field in a region of the flow. Our lab has two PIV systems for different applications: 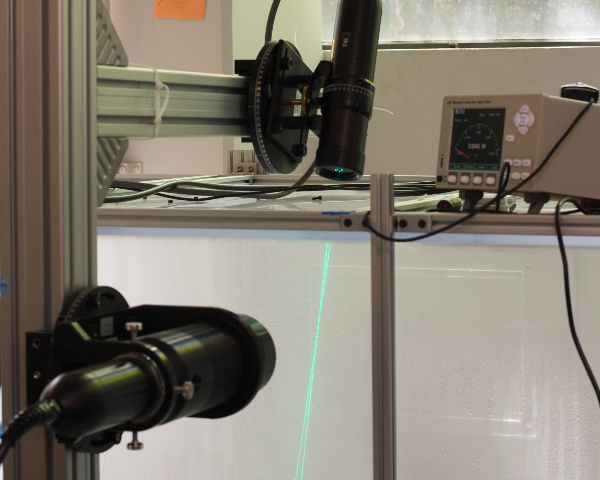 Phase Doppler Particle Analysis is an experimental technique that computes the size and two components of the velocity of particles crossing the probe volume (point where measurements are taken). If we use small particles to seed the flow, the velocity measurements correspond to the flow velocity. If there is a disperse phase (particles, droplets or bubbles) in the flow, the size allows us to discriminate between the two phases and calculate the velocity of both phases. In this measurement technique, we illuminate the flow with four laser beams that cross at one point (the probe volume) and collect the scattered light at an optimum angle given by Mie scattering theory.

Flow visualization and particle/interface tracking allows us to observe flow processes that have very short (micro to milisecond) characteristic times and measure particle size and interface dynamics from image processing techniques. In most of these experiments, the subject is illuminated from the back with a collimated light source to obtain the optimum contrast between the subject and the surrounding flow. Very short exposures are used to freeze the motion of the particle. 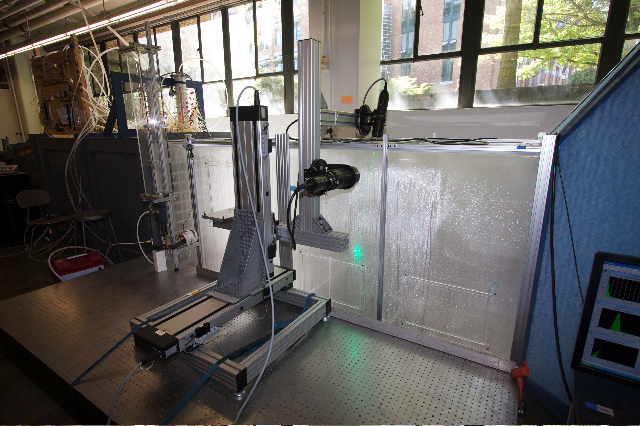 The low speed wind tunnel is a 3m long 1.2m x 1.2m square cross section blow down wind tunnel with a maximum speed of 1 m/s. Right now, we have a turbulence generating grid with a 9x9 array of injectors installed at the intersection of the grid tubes. We are using this facility to study the dynamics of small water droplets (1-100 microns in diameter) in a turbulent flow. The application that motivates our work is the growth of droplets in clouds during the warm rain formation process. We are particularly interested in the effect of turbulence-induced collisions in the size range between condensation products and large drops where gravitational settling controls the dynamics.

The heart simulator flow loop is being used in two experiments. In one, we study the trajectories of microbubbles (1-10 microns in diameter) injected into a simulated artery. Our focus is in the coupling of hydrodynamic forces (lift, drag, added mass, etc.) and ultrasound induced (Bjerknes) forces. The motivation for this project is the use of Ultrasound Contrast Agents (gas-filled, lipid-coated microbubbles) as targeted drug delivery vectors where the Bjerknes force is used to steer the microbubbles to their destination through unintrusive extracorporeal ultrasound. The second project is the simulation of the solid and fluid mechanics in flow phantom reproducing the geometry and compliance of arteriovenous fistulas (shunt between an artery and a vein). The motivation for this study is the understanding of the role of mechanical stresses on the vascular wall in the tissue remodelling and the eventual failure of this surgical procedure, which is performed with increased frequency (over a million per year in the US alone) for dialysis access in patients with End-Stage Renal Failure.