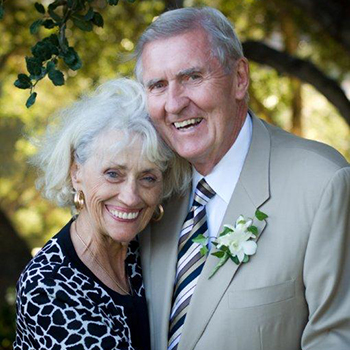 This may be an understatement. Since they moved to Seattle 53 years ago, Bill and his wife, Lois, have been part of many Seattle institutions: Ryther Child Center, the Museum of Flight, the Boys & Girls Clubs of King County, the Alliance for Education, the Washington Athletic Club, the Rainier Club and, not least, the Seattle Golf Club. It was there that Bill learned about Northwest Hospital & Medical Center. Members of the club played a key role in founding the hospital, and he’s been on the hospital’s board for more than 30 years.

Bill has nothing but praise for Northwest Hospital. “The awards they get for care are top-notch,” he says, and the facility is user-friendly — a point of pride for the hospital, which is very connected to the north Seattle community.

Now in their eighties, the Rexes have been reviewing their estate planning over the past few years. They decided to establish a charitable remainder trust to make the largest gift ever made to Northwest Hospital & Medical Center. In addition to this donation, they also made a generous gift to support research into post-traumatic stress disorder in UW Medicine’s Department of Psychiatry and Behavioral Sciences.

The gift to Northwest Hospital is a reflection of Bill and Lois’ long-standing admiration of the hospital, but their research gift to psychiatry came about in a different way. When Bill — a member of the UW Medicine Board — met doctors helping veterans with psychiatric problems at UW Medical Center’s Roosevelt Clinic, he was deeply moved. “They’re helping people who saved our country,” Bill says.

If the Rexes’ planned gift was inspired by a deep belief in the importance of physical and mental health, it was also grounded in financial acumen. Bill spent his entire career in the investment banking industry, many of them at Foster & Marshall, Inc. He was also one of the original five people in his industry to be appointed to the Municipal Securities Rulemaking Board by the U.S. Securities and Exchange Commission.

And the Rexes know that their gifts will continue their legacy of service. “There’s great satisfaction in knowing we’re helping people for years to come,” says Bill.