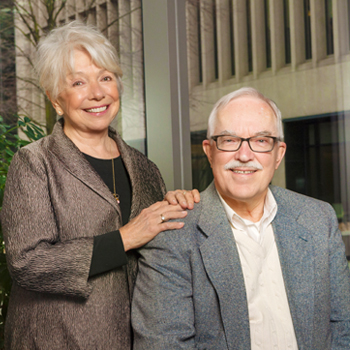 “It started with one award,” says Larry Tietze. He’s referring to the gift that his family foundation, the John H. Tietze Foundation Trust, made to UW Medicine in 2006.

With the award, a researcher bought a piece of equipment crucial to her work; in turn, the equipment helped the people in her lab. The result? These researchers secured millions of dollars to support research in cardiology, cancer and muscular dystrophy, among other topics.

Larry recalls this return on investment with pride. And in subsequent awards, the trust — including Larry, his wife, Eileen, and several family members — have made a point of focusing on junior researchers, people early in their scientific careers.

“My father, John H. Tietze, had a vision,” he says. “Wouldn’t it be wonderful if you could help young scientists? That’s where the big ideas are coming from.”

The John H. Tietze Foundation Trust supports education and medical research. This focus was motivated, in part, by the untimely death of Larry’s mother. At UW Medicine, the current generation of Tietzes is focusing on making awards — more than 20 so far — to stem-cell-based researchers.

“We could not be more excited about this return on investment,” says Larry. Inspired, he and his wife, Eileen, decided to make their own gift. After speaking with a representative at the University of Washington, the couple established a charitable remainder trust for UW Medicine.

The Tietzes also enjoy the sense that their planned gift will leverage progress at UW Medicine. It’s a lesson learned from the junior researchers they’ve supported.

“You don’t have to be a billionaire to make a big difference,” says Larry.