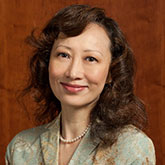 After receiving a J.D. in Los Angeles, Calif., Jody practiced as an international tax lawyer in China, focusing on multinational companies’ China market entry strategies and corporate tax planning. Jody’s expatriate career also included advising U.S. citizens living and working abroad on U.S. individual income tax-planning matters. Upon returning to the U.S. (and for the last 13 years) Jody devoted her professional energy to academic medicine, serving as an administrative and finance manager, first at the University of Michigan Health System and later at UW Medicine. Born in Shanghai, China, and having lived on both sides of the Pacific Ocean, Jody calls herself a transpacific citizen and is raising her three children to be transpacific, too.