New research from the Carrington Lab, published in Nature Climate Change, demonstrates that effects of ocean acidification could show up in some surprising places.

Although extensive research to date has shown that changes to ocean chemistry, largely due to atmospheric carbon dioxide dissolving in the ocean, hampers the ability of some marine species to form calcified parts (e.g. shells), this new research reveals that other effects could have critical ecological and economic consequences. At high levels of carbon dioxide—which are,well in line with expected concentrations in over the next century—structures used by the common bay mussel (Mytilus trossulus) to attach to hard surfaces, known as byssal threads, were weaker and less able to stretch. And that’s bad news when combined with other environmental stresses that mussels can typically withstand, like waves and currents. 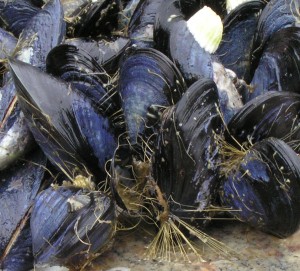 Combining these lab results with a mathematical model indicates at high CO2 individual mussels could be dislodged by forces 40% lower than those attached under present-day conditions. Mussels with a weakened ability to attach to rocks and other hard surfaces could cause significant ecological shifts in the communities of plants and animals that make up in rocky intertidal.  Furthermore, this can create a frustrating economic loss to an aquaculture industry valued at $1.5 billion annually.

Mussels are among the most important species living on rocky shores worldwide, dominating ecosystems where they live. Their success largely stems from their ability to anchor themselves to rocks even in the face of large waves. The structures they use to attach to the shore are tough, stretchy strings that the mussels make themselves, which can glue to nearly any surface. The properties of these byssal threads are of great interest to biochemists and have been studied as possible medical adhesives. In addition to holding mussels onto natural shores, these same threads anchor the mussel aquaculture industry. Farms get juvenile mussels to adhere byssal threads to ropes suspended in productive coastal waters where they grow to market size. 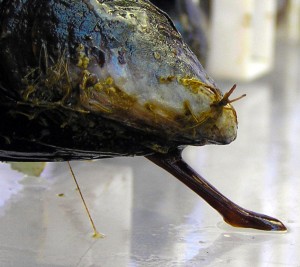 Mytilid mussel with foot on substratum (to right) and a fresh byssal thread under the animal. Photo: Laura Coutts.

In this study, we allowed animals to create byssal threads under a range of ocean conditions similar to both present day and predicted future conditions. We then tested them with engineering equipment to see how strong they were. At levels considered reasonable for future coastal ocean, byssal threads were weaker and less able to stretch. Subsequent tests revealed that the problem was due to weakening at the plaque region where the thread attached to rock surfaces. 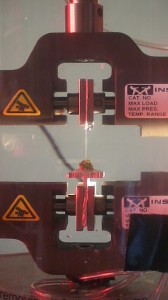 A mussel byssal thread in the grips of an Instron materials testing machine. Photo: Matt George

Much ocean acidification research to date has focused on the process of calcification, whereby animals (and some plants) make hard parts such as snail shells and coral reefs. Understanding the broader consequences of ocean acidification requires looking at a range of biological processes. This work is an important demonstration that many critical biological materials can be affected by the pH of the seawater in which they are made.

Feel free to use these images with a photo credit.