Posted at 13:25h in Uniters of UW by Roshni Sinha
Share 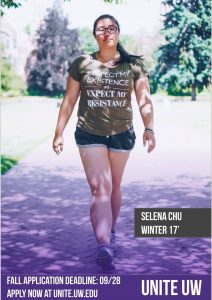 Growing up, I was constantly compared to my cousins, which made me feel like I would never match up to anybody or be good enough for my parents. In Asian culture, you’re either first or you’re nothing. It sounds a little extreme, but I’ve lived with the reality of it. Somewhere along the line I realized it’s not their fault that they had these preconceived notions about weight, this is what they grew up with, it’s their norm and I can’thold them against it. Over the years, the issue began to really bother me and resulted in pent up emotions that seemed to really crumble my self-confidence.

When we moved to Washington in 2011-12, I made friends that supported me to be confident in myself and my personality. They embedded in my mind that the only way I could become confident and proud of myself is if I believed in my strengths and let go this overbearing weight (pun intended) of insecurity. Thanks to their support, a lot has changed. I’m a lot more confident in myself and feel much stronger, but my struggle doesn’t stop there. I was born in the US, but I wouldn’t say I’m entirely American. I kind of mix my American and Chinese heritage together, to the point where now it’s a nice blend of culture. Coming to college, I wanted to start anew, and be free of my oppressive self-doubt and insecurities. On such a large campus, I was a tiny speck in the world. But I told myself I would make this a fun experience. Unite UW was one of the best decisions I’ve ever made. The program made me feel like I was part of something bigger, and it was exhilarating to have people open up to me and accept me as I am. I remember thinking “This is what a community should be. I can live in this world without conforming to others’ standards.”, I felt myself maturing over the course of the program and developing into an adult, but like everyone else, I’m still a child at heart!