“The memorial is anchored by a five-point star, similar to the medal star. At the north point of the circle is a “book stone.” A plain serpentine rock that sat for years outside the UW sculpture studio was split open like a book and polished. “The stone glows like ordinary people courageous enough to do something extraordinary for their fellow human beings,” said sculptor Heidi Wastweet, who was involved in the project. A basalt column in front of the stone features the face of Minerva, goddess of both wisdom and war, who is pictured on the medal. Near those rocks are four sentinel stones surrounding one with bronze wording from the recipients’ Medal citations.” (text from http://www.washington.edu/visit/valor/) 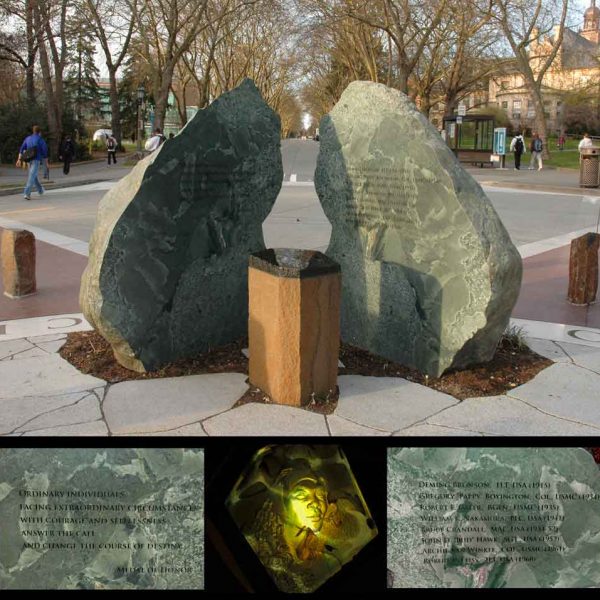 History of the Medal of Honor Memorial 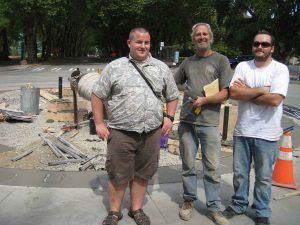 Michael Magrath, a UW visiting scholar in Sculpture and Public Art, led the team that designed the monument. It included Heidi Wastweet, an acclaimed medallic sculptor, and Dodi Fredericks, landscape architect. Students helped to lead the effort to build the memorial back in 2006, but the motion was initially tabled due to the wave of angry emails ASUW received. This was because originally the memorial was only to honor Gregory “Pappy” Boyington and was deemed not inclusive of the seven other medal of honorees from UW.

In April, the student senate passed a resolution in support of creating a memorial that would include all medal of honor recipients from UW. Leaders of the student senate began launching a $100,000 fund drive in March of 2007 to make the memorial happen. ASUW was successful in raising funds for the monument and money was also raised through private contributions to help pay for the $152,000 project.

Heidi Wastweet wanted to “inspire students” and for them to think “if these alumni could do extraordinary feats, then they can too”. The construction for the memorial began in August of 2009, was completed by the beginning of the autumn academic quarter, and was dedicated on Veterans day of that year (Honoring Heroes). Their design is anchored by a five-point star, similar to the star on the medal, inset into the traffic circle. At the north point of the circle is the “book stone.” It’s a plain serpentine rock buried for millennia but unearthed at the same time the memorial was conceived. It’s a plain, ordinary looking stone from without, but incredibly tough. Cracked open, it reveals an almost impossible passage, and the inside of a book that records the incalculable forces and complex structure of those men whose names are inscribed upon it.

“A permanent, powerful reminder of the extraordinary things that can happen when ordinary people take action.” This was what UW President Mark Emmert desired for the Medal of Honor monument to do in the minds of people who see the memorial (O’Donnell). And the memorial is standing in UW campus today, doing just that. 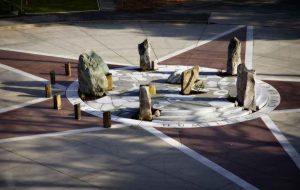 The Life Behind the Memorial

Learn about each of the service members represented on the memorial by clicking below.

As commanding officer of the Black Sheep

Squadron in World War II, Boyington led his men in air battles that crippled Japanese forces. In October 1943, Boyington led 24 fighters over 60 Japanese planes parked on an airfield. During the battle that followed, American forces destroyed 20 enemy planes while losing none of their own. Though in his early 30s, Boyington was 10 years older than many of the men on his team; hence, the nickname “Pappy.”

Wounded by a hand grenade and a bullet, Bronson nevertheless led his unit in capturing enemy positions near Eclisfontaine, France, in 1918. At the UW, Bronson was a forestry major and played Husky football from 1912 to 1916.

On Nov. 14, 1965, while under extreme fire in Vietnam, Crandall nevertheless made 22 trips to a battlefield in the Ia Drang Valley, resupplying troops with ammunition and collecting more than 70 seriously wounded soldiers. It inspired other helicopter pilots to join the effort. Like other medal recipients, Crandall earned not only the Medal of Honor but several other awards, such as the Purple Heart. The movie “We Were Soldiers” is based on the Ia Drang battle. Actor Greg Kinnear plays Bruce Crandall. For a review of the movie, go to http://community.seattletimes.nwsource.com/archive/?date=20020303&slug=crand
all03

As a major in 1942, Galer shot down 11 enemy aircraft in 29 days. He himself was shot down four times during World War II and the Korean War. Galer retired as a brigadier general in 1957.

On Dec. 2, 1969, North Vietnamese soldiers attacked Leisy’s unit, outnumbering them 10 to 1. Leisy used his own body to shield his fellow soldiers from a rocket-propelled grenade. Then, while mortally wounded, he continued to direct his men, refusing medical treatment until others were cared for. Leisy was 24 at the time of his death. He had been in Vietnam less than three months.

Twice on July 4, 1944, Nakamura singlehandedly attacked German machine gunners in Italy so his platoon could be freed from pinned-down positions. During his second effort, he was killed. Nakamura had volunteered for the Army after the U.S. government forced his family and other Japanese-Americans on the West coast to move to internment camps.

In November 1950, Van Winkle led a charge through Chinese gunfire. One bullet shattered his arm, and a hand grenade exploded against his chest. Refusing to be evacuated, Van Winkle continued shouting orders and encouragement to his men. The platoon eventually repulsed a fanatical enemy attack.