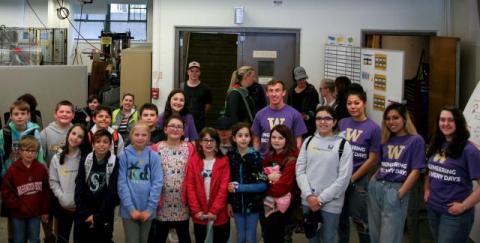 The Boeing Advanced Research Center (BARC@UW) lab recently participated in its 5th year of Engineering Discovery Days, which hosted over ten thousand middle and high school students for two days. This year’s exhibit was led by Taylor Woo and Michelle Ko, who are the first Industrial Design and Art students to join the lab. Their vision was to inspire their young visitors through virtual reality (VR), and to showcase just how enormous and sophisticated Boeing robots are in real life. Modeled after a 15% scaled down Collaborative Robot Cell displayed at waist height in the lab, their virtual exhibit allowed visitors to walk through and explore this cell at life-size.

When dawning the VR headset, visitors find themselves at the heart of an 80,000-sqft factory that is home to four large robots moving about to precisely complete their tasks. While the robots tower nearly 16’ in height, visitors can easily take control and command the robots to follow their hands – providing a literal hands-on lesson in joint kinematics. Off in the distance of this digital facility also are automated guided vehicles roaming about, and a shell rendering of a parked 787 Dreamliner to scale, which visitors can walk around and under. For most, the exhibit appears to be a game, however its scope far exceeds that, as it represents the potential future of robot programming; where demanding coding on a monitor may someday be superseded by an intuitive virtual 3D interface. The hope would be one day, one or more of the ecstatic lab visitors, will return to lead such an effort.

This year’s Discovery Days, examples the BARC lab’s commitment to further explore new ways of leverage all the student talent made available through academic partnership – going beyond the College of Engineering. Expect to see more development in the near future as the BARC lab spins up to make use of its newly acquired visual concepting and design talent.

Special thanks to Luke Wavrin, Elma Dedic, and Liza Manevich for their active participation and support of this exhibit.
Thanks also to Jonathan Ahn and Sam Pedigo for their leadership to make this happen.


From article by Jonathan Ahn