Introduction
The Boeing Advanced Research Center (BARC) End Effector project looks to improve process efficiency and performance while applying composite material onto a surface using a 6-DOF robotic arm paired with a separately controlled end effector. Currently, the rate at which material can be deposited is limited by the processor speed of the robotic arm controller because it controls both the robotic arm and the end effector. To increase the maximum operating rate, the processing load associated with control of the end effector will be offloaded to a separate controller. A benchtop system was used to characterize the clamp, add, and cut process used for cutting and paying out carbon fiber tow onto a surface. This benchtop system will be used to test an end effector controller. The team programmed a Simulink control system to actuate the pneumatic and stepper motor drives that facilitate the clamp, add & cut processes. The benchtop system is used to compare performance of various pneumatic piston sizes, to determine closed loop controller parameters, and to characterize how system timing and performance is affected by simultaneous actuation of the pneumatic subsystems (cut in particular).


Benchtop System Model, the spools of material are in yellow 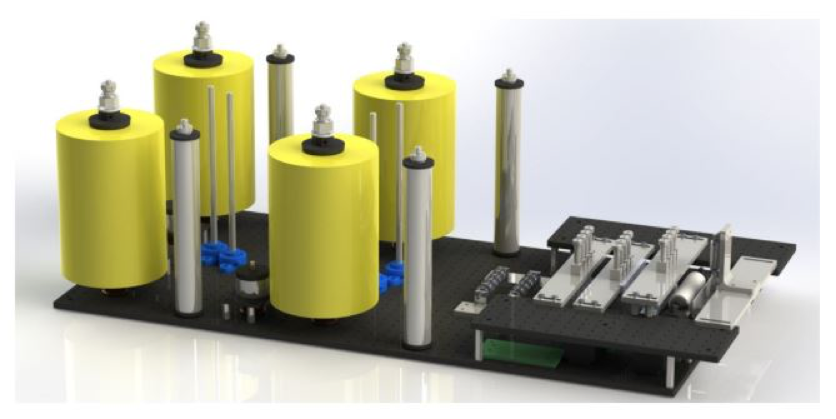 Features of the Benchtop System
A benchtop testbed was developed, and a rendered model of the system is shown below. To test the effects of multiple pneumatic actuators triggered at once on process timing, the system is capable of paying out and cutting carbon tow from four material rolls simultaneously.

The benchtop system is comprised of multiple subsystems. The material spool holder subsystem supports the material roll, and maintains 1 pound of carbon tow tension as material is paid out. Then the redirect subsystem simultaneously positions the carbon tow to be received by the clamp subsystem and separates the carbon from the polymer backing that prevents the carbon from adhering to itself on the roll. Through friction alone, the polymer backing is peeled away from the tow and wrapped around the polymer take-up as it comes off the material roll. The clamp subsystem is used to prevent the tow from unspooling after it has been cut. This is achieved by clamping the spool to a material guide plate using a vertically mounted pneumatic piston. The add roller subsystem feeds material to the surface roller after the material has been cut, and the surface roller subsystem simulates the relative moment of the end effector and a stationary surface that a carbon tow is applied to. The processes are controlled by a system using Simulink software and a Speedgoat processor. The control systems delivers varying amounts of current to the various valves, motors, mag brakes etc.