From the mid-1990s to 2010, the number of family medicine residency programs in WWAMI was a constant 16. These “original” WWAMI programs opened between 1969 and 1997. Since 2010 we have added 6 core programs as well as 4 rural training tracks, a 40% increase in programs

Five programs in the region that were started as osteopathic-only programs are now working toward ACGME accreditation. There are also plans to start at least 7 more programs and rural training tracks in communities across WWAMI. 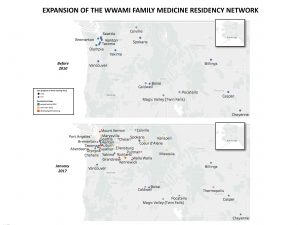