John Kinuthia is a consultant obstetrician and gynaecologist at Kenyatta National Hospital and University of Nairobi. He has been conducting HIV research focusing on PMTCT since 2004 when he took a position as the study physician for a randomized clinical trial that was evaluating viral and immune responses in mother-infant pairs who received either short course zidovudine or maternal HAART. Later in 2006, he was a co-investigator for a study to determine contraceptive use among HIV infected women attending comprehensive care centre at Kenyatta National Hospital. He has gained invaluable experience in the conduct of randomized trials in his position as study physician and later as deputy study coordinator of the Nairobi site for the multisite randomized clinical trial evaluating the role of acyclovir to prevent HIV transmission from individuals co-infected with HIV and herpes simplex type 2. In 2007, he enrolled in the  MPH program at University of Washington and conducted a study to evaluate barriers (personal, social and institutional) to access and utilization of prevention of mother-to-child transmission of HIV interventions. The study enrolled 2,700 mothers with infants for week immunization at six maternal and child health clinics in Nairobi and Western Kenya. In 2010, he was one of the regional directors for the study evaluating the impact of national PMTCT program in Kenya. The study enrolled 13,344 mothers from 304 facilities. Currently, he is the site Principal Investigator for a cohort study that will follow 2,000 women from pregnancy to 9 months postpartum to evaluate factors contributing to HIV acquisition during and after pregnancy.  In addition, he is coordinating trainings in implementation science for the Partnership for Innovative Medical Education (Prime K) linked award that is focusing on strengthening maternal, newborn, and child Health.  I have also been very involved in mentoring and other training activities since 2009 when he was appointed the Site Director for the University of Washington International AIDS Research and Training Program’s activities in Kenya, including the FIC Research Scholars and Fellows Programs.  In 2011 he was appointed Deputy Chair of the Department of Research at KNH which also has a large research training component.

View the Map of Project Sites 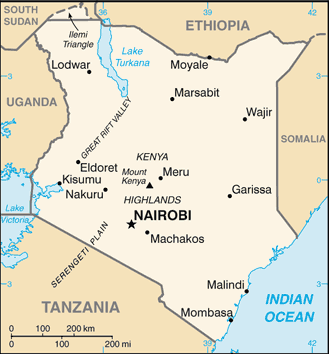