Soldiers, sailors, airmen, and veterans turned against the war in Vietnam in large numbers, and by 1971, the military was, by its own admission, unable to fight the war in Vietnam because their soldiers would not obey. One of the most effective methods of spreading antiwar and radical ideas were the underground newspapers GIs published and distributed (often clandestinely) around bases. Over 300 such newspapers were published during the length of the war, though many did not survive for longer than a few years, due to the rapid turnover among active-duty soldiers as they rotated in and out of Vietnam and on and off bases. In the Pacific Northwest, there were many such papers, including "Counterpoint," "Fed Up!," the "Lewis-McChord Free Press," and "G.I. Voice" from Fort Lewis Army Base and McChord Air Force Base near Tacoma, WA; the unit newsletters "B Troop News" and "First of the Worst," from Fort Lewis; "Sacstrated" and "Co-Ambulation" from Fairchild Air Force Base, near Spokane, WA; "Puget Sound Sound Off" from Bremerton Naval Yard on the Washington peninsula; and "Yah-Hoh," published out of Fort Lewis by a group of radical Native American servicemen. One ongoing project of this website is to collect and make available these Pacific Northwest newspapers in full. This gallery is part of the Pacific Northwest Antiwar and Radical History Project, which features a special section on the GI Movement in the Northwest. Documents digitized courtesy of the Library at the University of Washington, Tacoma; Pacific Northwest Collection, Tacoma Public Library; Special Collection Library, University of Washington, Seattle; and with permission from the personal collection of Megan Cornish. 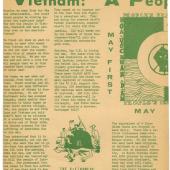 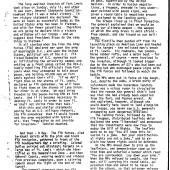 10/02/2016
Includes a report from the aquatic invasion of Fort Lewis by GI-CAP activists. 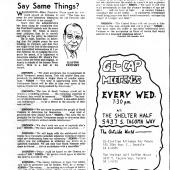 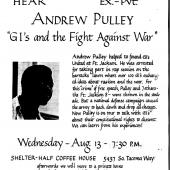 10/02/2016
Includes articles and letters on the formation of GIs United at Fort Lewis. 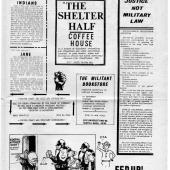 10/02/2016
Issue donated by Megan Cornish, who helped produce Fed Up at the Shelter Half Coffeehouse in Tacoma, and digitized with permission. 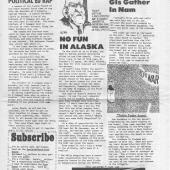 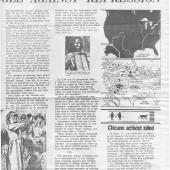 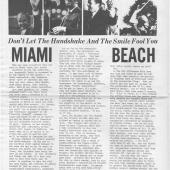 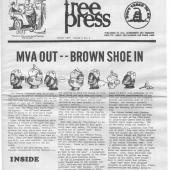 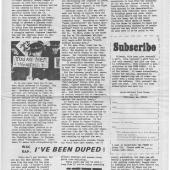 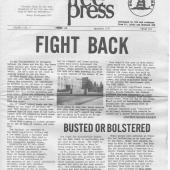 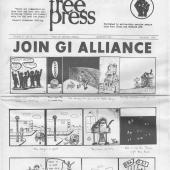 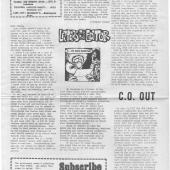 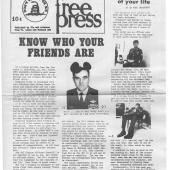