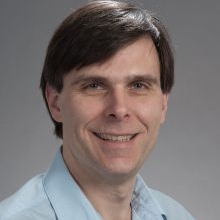 Matt Kaeberlein, Ph.D., is recognized globally for his research on the basic biology of aging. He has the perspective that the molecular mechanisms of aging will lead to interventions that slow the onset and progression of age-related chronic conditions, such as cancer, diabetes, kidney disease, heart disease, Alzheimer’s and others. Current projects in the Kaeberlein lab have a common theme centered on identifying the genetic and environmental factors that modulate longevity and understanding how these factors act at a molecular level. Once these factors are identified, then it will be possible to develop drugs specifically targeting the gene variant of interest. If these drugs increase life span or delay the onset of age-associated disease in animal models, they will be good candidates for human clinical trials.

In the UW ADRC, Dr. Kaeberlein leads Project 1, 'Mechanisms Linking Normative Aging with Alzheimer’s Disease.' This research is based on the finding that age is the single greatest risk factor for Alzheimer’s disease, yet the way in which normal aging processes differ from those processes that lead to Alzheimer’s isn’t entirely clear. This project seeks to understand the molecular processes that cause cells to become more susceptible to Alzheimer’s by studying aging roundworms known as nematode Caenorhabditis elegans (C. elegans). Using the nematode model, we will determine the effects of toxic amyloid-beta on gene expression in the context of normal aging. Then, we will explore how two important signaling pathways, the hypoxic response and the mechanistic target of rapamycin (mTOR), modulate cellular resistance to amyloid-beta toxicity. Previously, the Kaeberlein Lab has shown that both of the pathways regulate normal aging and resistance to amyloid-beta in C. elegans. These studies are likely to provide novel insights into the relationship between normal aging and AD with the overall aim of developing therapies that will delay the onset and progression of Alzheimer’s.

Dr. Kaeberlein has been recognized with several awards, including a Breakthroughs in Gerontology Award from the Glenn Foundation, an Alzheimer’s Association Young Investigator Award, an Ellison Medical Foundation New Scholar in Aging Award, an Undergraduate Research Mentor of the Year Award, and a Murdock Trust Award. In 2011, he was named the Vincent Cristofalo Rising Star in Aging Research by the American Federation for Aging Research and appointed as a Fellow of the Gerontological Society of America, and in 2012 he joined the Board of Directors of the American Aging Association. Dr. Kaeberlein currently serves on the editorial boards for Science, Aging Cell, Cell Cycle, PloS One, Frontiers in Genetics of Aging, BMC Longevity and Healthspan, F1000 Research, Ageing Research Reviews, and BioEssays.

Matt Kaeberlein in the News