Is Amazon Drone Delivery Really all that Environmentally Friendly? 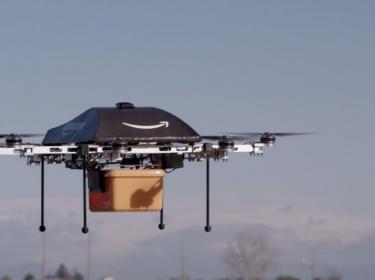 Most drone delivery companies promise speed. Speed can mean the difference in receiving an AED in time to treat cardiac arrest, or an EpiPen in time to save someone with a nut allergy who accidentally ate Nutella. Drones can bypass traffic-clogged roads (they don’t even need roads, period).

Amazon Prime Air is no exception, envisioning a future delivery system that gets packages to customers in 30 minutes or less.

But some experts fear that such an emphasis on speed comes at an environmental cost.

When drone delivery is good for the environment
By a number of measures, drones can be more energy efficient than trucks.

Researchers from the University of Washington conducted a study in 2017 comparing carbon dioxide emissions in drone and truck deliveries. Even though drones traveled more miles than an equivalent truck route (because drones can carry only one package at a time) the study found that drones emit less carbon dioxide than trucks if transporting light packages with fewer stops.

“Drones are remarkably energy efficient machines, particularly when compared to the current fleet of over-the-road trucks,” said Anne Goodchild, a professor at the University of Washington focusing on supply chain and logistics.

In use cases where lightweight items are delivered over short distances (say, important documents from one building to another across a river, or blood samples from a doctor’s office to a nearby lab), there’s a case to be made that drone delivery is more efficient. But researchers also found that drones emitted more carbon dioxide than trucks when carrying heavier packages over longer distances.

“The main design challenge for drones has been to reduce weight and develop battery technology such that a meaningful distance can be flown,” Goodchild said.

Among the most apparent weight reductions in drones vs. today’s delivery trucks: the driver. And with no driver, drones also don’t need to transport equipment to keep that driver safe, like airbags or seat belts.

“This makes them able to be smaller and made of more lightweight materials,” she said.

Most drones are electric-powered

While cars and trucks typically use gasoline or diesel fuel, most drones are battery-powered (an Amazon spokesperson said Prime Air drone batteries will be charged via solar power).

“When it comes to emissions and energy efficiency, an electric drone, charged using sustainable means, traveling to drop off a package is a vast improvement over a car on the road,” according to a 2019 Amazon blog post.

“Today, most of us run to the store because we need an item now,” the blog post stated. “With a service like Prime Air, we’ll be able to order from home and stay home. This saves tremendously on fuel usage and reduces emissions.”

But some experts say it’s that “need an item now” mentality that is actually hurting the environment — and drones play a big role in that.

Environmental problems with ultra-fast drone delivery
“At first blush, research shows that small drones are more environmentally friendly than their ground-delivery alternatives,” said Bill Denbigh, a self-professed logistics nerd who currently works as the director of product marketing logistics at supply chain company TECSYS. “But applying a blanket proclamation of environmentalism overlooks many of the more complex parameters that factor into delivery strategy.”

Consumers are primed to expect speed

In general, there’s a correlation between faster deliveries and greater environmental damage. Say you want size 8.5 wide blue Nikes to your home in Missouri, but they’re only in stock at a Nike warehouse in Oregon. If you can afford to wait for your sneaker delivery, Nike can consolidate all shipments headed for Missouri that week, ensuring your blue shoes are in the container. But if you need those shoes in two days, then those shoes are probably going to fly solo. What could have been one trip for a week’s supply of shoes to Missouri is now at least one additional trip.

Those ultra-fast deliveries have been sharply criticized for their environmental impact, even drawing protests from Amazon’s own employees. With drones, Amazon, may be priming customers to expect deliveries even faster.

For its part, Amazon says that only certain items would be available via drone. Just as not every item on Amazon’s site is necessarily available for two or one-day shipping (and even fewer items are available for 2-hour shipping), the same would likely hold true for drones (so you likely couldn’t get those size 8.5 wide blue Nikes anyway).

Amazon says that it’s for that reason that the fastest (think a day or less) deliveries often turn out to be more sustainable than two-day deliveries. Acknowledging that it’s “counterintuitive,” an Amazon spokesperson said that faster delivery speeds at Amazon generate lower carbon emissions because the only products available to buy already exist in nearby fulfillment centers — no airplane involved (thus generating less carbon).

Amazon has 110 operating fulfillment centers in North America, and the company in September said that it plans to open 1,000 smaller delivery hubs.

Consumers are primed to make more one-off orders, rather than fewer large orders

Unless it’s really an emergency, you’re likely not going to get in your car to go to the grocery store for one item. Instead, you probably compile a list of items you’re running low on along with ingredients you’ll need for upcoming meals, so you can fill up your cart during your weekly grocery run. Fewer trips saves you time (and gas money).

The same principles apply for online shopping, as retailers find it inefficient to ship one small, low-cost item. In fact, many have minimum spend requirements.

Target sells nearly any type of Cap’n Crunch cereal you want — but they’ll only ship it if you spend at least $35.

Amazon used to have similar policies (but has also rolled them back).

Experts fear that drones encourage small or single-item orders. Suddenly a drone is delivering you a new pair of running shorts simply because you forgot to do laundry. Since it takes less time than running another load, it can make sense to order a new pair so you can more quickly get running on the road.

Amazon has tried to quell such individual shipments via Amazon Day Delivery, a relatively new program that lets Prime customers designate one day of a week to receive orders. As long as you’re ordering eligible items, your entire order will be delivered on one day of the week. Rather than the shoes arriving Tuesday and the shorts arriving Wednesday, the program reduces how many trips the delivery person needs to take and how much packaging is used.

However, that likely won’t matter when Amazon Prime Air becomes widely available, as drones can only carry limited weight (the University of Washington study found that drones are more efficient at lighter weights anyway).  A spokesperson for Amazon said Prime Air would deliver packages that are 5 pounds or less, to customers within a 10-mile radius of Amazon delivery stations.

A study compared energy used per unit of distance traveled across a range of vehicles, and drones far outrank any other delivery vehicle, according to a study published in 2018 led by Joshuah Stolaroff, an environmental scientist at the Lawrence Livermore National Laboratory.

But in many scenarios, drones might end up needing to fly more miles to make the same deliveries. While a truck driver can load up their vehicle with tons of letters and packages and serve multiple, large apartment buildings in one trip, a drone would have to make hundreds of trips to deliver the same items.

“For cases comparing a drone and a vehicle carrying a single package over similar distances, for example a customer picking up a package from a retail store, the drone is clearly a lower-impact solution,” Stolaroff’s study found. “However, delivery trucks carry many packages, delivering (on average 1.51 packages per mile), and their impacts need to be allocated per package.”

While it might seem logical to build larger drones that can carry more stuff in a single trip, the larger the drone is, the greater the energy used to power the drone.

“Large drones only have lower impacts than the other delivery modes when charged with relatively low-carbon electricity,” the study found. And still, researchers found that even in low-carbon regions like California, electric trucks and electric vans fared better than large drones when factoring in how many trips drones needed to make to compare them to an average truck delivery.

The process of shipping running shorts within 30 minutes doesn’t fall solely on a drone. Delivery is a relay race, and the drone is only responsible for the last few miles.

Those shorts experienced multiple delivery modes: a semi-truck out of the warehouse, a plane to your city, a van to a sorting center and a truck to the drone launch pad. All that time, the shoes traveled through buildings and vehicles that required lighting, heating, cooling and human workers (who likely drove cars to get there).

Yet Amazon says it’s this process where it has a leg up on smaller drone delivery providers, claiming its infrastructure is more sustainable. For example, the company installed solar panels in some fulfillment centers (of the facilities that have solar panels, they generate enough electricity to power about 80% of annual energy needs), and it’s developing more sustainable packaging. Smaller drone delivery companies might not have the capacity to implement similar sustainable infrastructure — which concerns scientists.

The future of Amazon drone delivery
Whether the benefits of drone delivery outweigh the downfalls, it might be too soon to come to a conclusion. Despite CEO Jeff Bezos promising back in 2013 that drones would be delivering items to your home within four to five years (a deadline that’s long since passed), drone delivery is still in the nascent stages, primarily consisting of small-scale or one-off tests.

Today, DroneUp can deliver you a Covid-19 test, but only if you live within a 1-mile radius of a specific Walmart in Las Vegas. Wing (Google’s drone-focused, sister company) can bring you coffee, but only if you live in Christiansburg, Va. Amazon would not say when it expected to scale its Prime Air delivery drones.

A big reason why drone delivery is still far from ubiquitous is due to Federal Aviation Administration rules, which restrict how far drones can fly and whether they can fly over people. Plus, the FAA still needs to work out factors like how drones will communicate (a type of air traffic control for drones), and a system of drone license plates. Experts anticipate that new rules that would make widespread drone delivery possible won’t arrive until 2024.

Meanwhile, Amazon has another drone that seems closer to reality — and it’s not subject to any FAA regulation. This one is an indoor-only, home security drone.

In the meantime, Denbigh has his own solution that doesn’t require much in terms of new legislation, infrastructure or technology.

“If consumers use green transportation like bicycles or public transit to collect their online orders, that carbon footprint is better than any technology, drones included.”