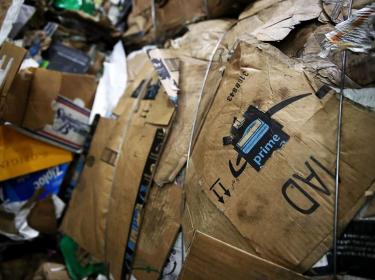 Amazon has changed the way Americans shop. This year, the e-commerce giant said its annual Prime Day sale was “the biggest shopping event in Amazon history.” During the 36-hour event, people bought over 100 million products, crashed the website, and signed up for more Prime memberships than ever before. The behavior is indicative of the buying culture Amazon created. The company's ease, speed, and savings — underscored by killer perks like free, expedited shipping and simple returns — has encouraged more people to shop online, more often.

But these free benefits come with a hidden environmental cost that doesn’t show up on the checkout page, experts say. Expedited shipping means your packages may not be as consolidated as they could be, leading to more cars and trucks required to deliver them, and an increase in packaging waste, which researchers have found is adding more congestion to our cities, pollutants to our air, and cardboard to our landfills.

Free and fast shipping has always been a Prime membership’s marquee perk — one that’s drawn in over 100 million subscribers who pay $119 annually. A 2017 study by UPS found that nearly all (96%) US customers had made a purchase on a marketplace like Amazon or Walmart, and over half (55%) said free or discounted shipping was the primary reason.

Riddhi Sanghvi is one of them. She’s a Boston-based architect with so little time to run errands that she depends on Amazon Prime. “I use it for pretty much anything and everything,” she told BuzzFeed News.

But lately Sanghvi has become concerned about the environmental impact of her Amazon deliveries. She recently ordered a children’s book that came in a big box that could have fit much more; in another delivery from Amazon-owned Whole Foods, sparsely filled grocery bags were delivered with nonrecyclable insulation liners destined for the trash. “I’m torn,” she said. “The convenience is amazing, but the waste is a shame.”

That convenience is encouraging people in the US to buy more, and to make more individual purchases rather than placing a single order for several items. “There are more sales in lower-price products online than there have been in stores,” Marshal Cohen, chief industry advisor at the NPD Group, told BuzzFeed News. And all of those transactions are negatively impacting our planet, according to Miguel Jaller, assistant professor of civil and environmental engineering at the University of California, Davis: “People are consuming more. There’s more demand created by the availability of these cheap products and cheap delivery options.”

Experts say that e-commerce could actually, if optimized, be beneficial for the environment. Getting into your personal vehicle and going to the store isn’t very efficient, but consolidating multiple shoppers’ deliveries into one vehicle can be. Anne Goodchild, director of the University of Washington’s Supply Chain Transportation and Logistics Center, told BuzzFeed News, “Broadly speaking, delivery services have the potential to dramatically reduce miles traveled.”

However, people aren’t offsetting the traffic to shopping malls and grocery stores by buying online. “The problem is we are still doing both, meaning there are more emissions and more congestion,” Jaller said. In fact, the number of trucks (which includes all types, not just delivery vehicles) on the road has doubled since 1995. Amazon was founded in 1994, and the company's free two-day shipping program, Amazon Prime, first launched in 2005.

In a 2013 study, Goodchild found that grocery delivery trucks emitted between 20% and 75% less carbon dioxide per customer on average than passenger vehicles driving to the stores around Seattle, but only if grocery stores could choose drop-off times and optimize delivery routes. When customers choose, the carbon savings are significantly smaller. “The benefit to a delivery being slower is that a company can consolidate more packages into fewer vehicles,” Goodchild explained.

Amazon is only speeding up customers’ options. In addition to free two-day shipping for Prime members, Amazon added free two-hour delivery with a new service, called Prime Now, in 2014, and it increasingly relies on hundreds of thousands of independent contractors with passenger cars to make those deliveries. Amazon’s Flex program, which operates in 50 US cities, is an app-based platform like Uber, but instead of dropping off people, Flex drivers drop off Prime packages or groceries.

Those drivers’ cars are typically smaller than commercial delivery vehicles, so they can’t fit as many packages or complete as many deliveries per tour. They’re taking longer routes, too. “Drivers are going from their home base to a warehouse to your house, and back to their home base. And warehouses are farther than the store you would have gone to,” Goodchild said.

While experts agree that, when comparing miles traveled, e-commerce could be better for the planet if its logistics were optimized, the benefit is less clear when comparing emissions. “Commercial trucks are heavier and higher-polluting per mile [than passenger vehicles],” said Goodchild. Trucks run on diesel, which is more fuel efficient than gasoline, but produces four times more nitrogen dioxide pollution and 22 times more particulates than petrol.

These trucks are also emitting most of their noxious fumes near underprivileged neighborhoods. “Products come from warehouses, many of which are located near or close to disadvantaged communities, which bear the bulk of those traffic emissions,” Jaller said. Warehouses are moving from empty lots far out of town, closer to urban areas where consumers live, according to Jaller’s 2015 study on distribution centers.

It’s not just the cars and trucks — rushed packages are often transported on planes, which produce a lot of CO2 (a heat-trapping gas that is partially responsible for rapid climate change), and Amazon is investing more (to the tune of $1 billion) in its own fleet. “In general, if something is coming from a longer distance, it will absolutely be air shipped,” said University of Washington’s Don MacKenzie, who leads the Sustainable Transportation Lab. Ground transportation, which is slower, is much more energy efficient than air travel.

In an emailed statement to BuzzFeed News, an Amazon spokesperson wrote, “We are constantly working to optimize our network and drive efficiencies.” The spokesperson pointed to the company’s commitment to transition to low-carbon commercial transportation. In the US, she said, Amazon also manages its own fleet of trailer equipment with features designed to minimize fuel consumption, like skirts that make trailers more aerodynamic.

Even if Amazon optimized solely for consolidation and fuel efficiency, consumers are shopping so often that it makes sustainable, efficient delivery difficult.

“On an item-by-item basis, whether home delivery is greener depends on how many items you buy per trip. We don’t replace one shopping trip with one online delivery. We replace it with four or five or six home deliveries,” said MacKenzie.

Consumers also take advantage of lenient return policies, which multiplies the number of vehicle miles traveled. “Many companies offer free returns, which creates more traffic and the like. If you don’t need it, don’t buy it,” Jaller said.

The consequence of all those different orders, shipped separately and returned for free, is more cars, more trucks, more planes, and more cardboard.

Cities are collecting more cardboard from street curbs than ever before. “In the last year, we have delivered larger recycling bins to 70% of single-family homes in San Francisco,” said Robert Reed of Recology SF, a San Francisco–based curbside collection company. People like the larger bins, he told BuzzFeed News, because they accommodate cardboard boxes from online shopping deliveries.

One waste management company has seen a 20% increase in cardboard over the last decade.

Waste Management, which services about 20 million residences in North America, has also seen more cardboard on curbs. “We knew there’d be a decline in newsprint, but couldn’t imagine the growth in e-commerce deliveries,” said Brent Bell, vice president of recycling. In the gap that newspaper left behind, the company has seen a 20% increase in cardboard for its curbside collection program over the last decade, Bell said.

Bell likes cardboard because it’s a relatively easy material to recycle. That is, if the cardboard makes it into the recycling bin. “Our next big challenge is an education campaign, showing people how to break down boxes to fit as much as you can. When the recycling bin gets full, the leftover is diverted to landfill,” Bell said.

Consumers, according to a USA Today study, are bad at recycling cardboard, largely because, in the past, they haven’t had to. In 2017, domestic consumption of cardboard rose 3.5%, but 300,000 fewer tons of cardboard were recycled in the US than previous years.

An Amazon spokesperson said that it works with manufacturers to make easy-to-open, 100% recyclable packaging through its Frustration-Free Packaging Program: “Our programs have reduced packaging waste by 16%, avoiding 305 million shipping boxes in 2017 alone.”

But even if blue bins are properly stuffed with cardboard, there’s no guarantee the material will make it to the recycling plant. Earlier this year, China, which processes much of the world’s recyclable materials, introduced stricter demands for imported cardboard: Only 0.5% “impurity” (food scraps and other contamination) is now permitted. As a result, a lot of material is ending up in the landfill.

As Amazon shortened shipping times from two days to two hours, shoppers’ appetites to get what they want, when they want, have swelled — and its competitors have followed suit. Walmart, Target, Home Depot, and a number of other retailers also offer free two-day delivery to meet consumers’ shipping standards. Google Express, Good Eggs, FreshDirect, Postmates, and Instacart also deliver groceries on demand, in addition to grocers, like Safeway and Vons, that have their own in-house services.

Still, with 49.1% of e-commerce market share in the US, Amazon is shaping the industry’s norms and dictating what shoppers should expect from an online retailer. This year, many retailers even offered their own deals on Prime Day to compete with Amazon and made up corporate sales holidays of their own.

All this convenience isn’t, on its own, a bad thing. If you need something, instead of having to walk or drive somewhere, you just have to tap or click. But that simplicity makes opting for the slower, greener choice especially difficult.

“With Amazon, it’s hard to be disciplined,” said MacKenzie, who’s a Prime member himself. “You’ve [got] an all-you-can-eat buffet as far as shipping goes. We don’t see that price signal telling us, maybe you wait and combine shipments,” he said.

It may be shoppers like Riddhi Sangvhi who ultimately push companies like Amazon to be more environmentally conscious. She’s considering canceling her Prime membership: “[The waste] is definitely a concern to me. I feel less inclined to order stuff that comes in a freezer bag, which defeats the purpose of using the service in the first place.”