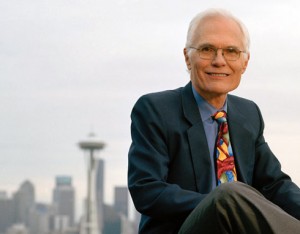 Speight Jenkins was General Director of Seattle Opera from 1983 to 2014. Recognized nationally as a leading authority on opera, a politically active arts advocate, and a beloved civic figure in Seattle, Jenkins was among the most influential and accomplished general directors in the United States. His passion for opera and deep knowledge of the art form influenced Seattle Opera’s many innovative productions, substantial publications, comprehensive education programs and services, and helped build the great audience for opera in Seattle. Jenkins strengthened and extended Seattle Opera’s reputation as a Wagner center by producing all ten of Wagner’s major operas, including two very different Ring productions. In 2006, Jenkins inaugurated Seattle Opera’s International Wagner Competition, developed to discover and promote outstanding young singers who show promise of major careers in Wagner operas. Because of his passion for the arts and energetic leadership style, the National Endowment for the Arts recognized Jenkins as a recipient of the 2011 NEA Opera Honors. The Seattle Times has named Jenkins one of the 150 most influential people who have shaped the character of Seattle and King County, and Opera News cited Jenkins as one of the 25 “most powerful” names in American opera. In 2008/09, as Jenkins celebrated his 25th Anniversary season at Seattle Opera, he received a Mayor’s Arts Award. For more than three decades, Jenkins has been an annual guest on the Metropolitan Opera Quiz. For decades, his voice regularly introduced listeners to opera on 98.1 Classical KING FM, and his CD-lectures on Wagner’s Ring have become a mainstay in opera libraries. Prior to his work at Seattle Opera, Jenkins was an editor of Opera News, wrote reviews and articles for a number of publications including the New York Post, and hosted the Metropolitan Opera telecasts. A graduate of the University of Texas and a member of Phi Beta Kappa, Jenkins earned his law degree at Columbia University and served four years in the United States Army as a member of the Judge Advocate General’s Corps. He has received an honorary doctorate of humanities from Seattle University, an honorary doctorate of music from the University of Puget Sound, and an honorary doctorate from the New England Conservatory. On the occasion of his retirement, celebrated at Seattle Opera by a magnificent gala, Seattle and King County proclaimed August 9, 2014 “Speight Jenkins Day,” he won the 2014 Governor’s Arts Organization Leadership Award, and the city of Seattle named a street after him. He is married and has two children and three granddaughters.