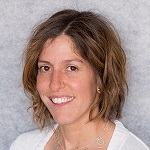 Biography: Kamini Singha is the Ben Fryrear Endowed Professor for Innovation and Excellence at the Colorado School of Mines, and serves as the Associate Department Head of the Department of Geology and Geological Engineering and Interim Director of the Hydrologic Science and Engineering Program.  She worked at the USGS Branch of Geophysics from 1997 to 2000, and served on the faculty of Pennsylvania State University as an assistant and then associate professor from 2005 to 2012.  Her research interests are focused in hydrogeology and environmental geophysics. Dr. Singha is the recipient of an NSF CAREER award, was awarded the Early Career Award from the Society of Environmental and Engineering Geophysics in 2009, and became the National Groundwater Association’s Darcy Lecturer in 2017 and a GSA Fellow in 2018.  She earned her B.S. in geophysics from the University of Connecticut in 1999 and her Ph.D., in hydrogeology, from Stanford University in 2005.

Biography: David Boutt is an Associate Professor in the Department of Geosciences at the University of Massachusetts-Amherst.  He received B.S. and M.S. degrees from the Department of Geological Sciences at Michigan State University in 1997 and 1999.  His MS work focused on understanding the impacts of land-use change on groundwater quantity and quality at the watershed-scale.  He earned his Ph.D. from the New Mexico Institute of Mining and Technology (Socorro, New Mexico, USA) in 2004 and held a postdoctoral position at Sandia National Laboratories before joining the faculty at UMass-Amherst in 2005. During his Ph.D. research he was awarded an AGU Horton Research Grant.  Dr. Boutt’s dissertation work focused on the coupling of fluid flow and deformation in fractured and faulted media through the development of discretely-coupled fluid-solid models.

His current research program focuses on understanding the role of groundwater in catchment-scale hydrologic processes. This involves delineating the contribution of groundwater storage to stream flow generation, spring discharge, and hydrologic budgets. A list of his publications can be found at https://blogs.umass.edu/dboutt/.

Dr. Boutt has served the hydrogeologic and broader geoscience communities by serving on proposal review panels and volunteer boards. Boutt has been a member of GSA since 1997 and has convened many topical sessions at GSA national meetings. He is currently an editor for the journal Hydrological Processes, and he was previously an associate editor for Hydrogeology journal.


Deprecated: Directive 'allow_url_include' is deprecated in Unknown on line 0