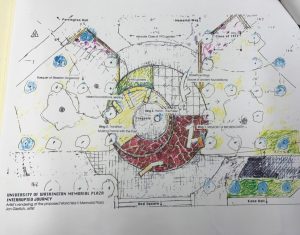 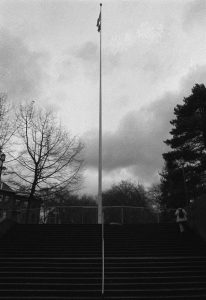 The effort to build the memorial began in 1995. This period coincided with the 50th reunion of the “War Years” classes, which were comprised of the classes from 1944 to 1946. The War Years classes wanted to leave a monument at UW, to memorialize a lasting tribute for those who were killed in action during World War ll. The War Years classes, along with the World War ll committee, the alumni association, and the office of development sought out “gifts” from donors, and managed to fundraise $70,000 to build a memorial. It had been agreed upon that if insufficient funds were raised, these gifts would be used to help establish a World War ll Memorial Scholarship. Thankfully, sufficient funds were raised to meet the design in mind. Kurt Kiefer and Bill Talley worked with members of the War Years Reunion Committee to agree upon a design for the projects, which was eventually approved by the community. The site is located at the southern end of Memorial Way, near Parrington Hall, which begins at the 17th avenue N.E. entrance to campus. It is a fitting place for the Second World War, since it is near the 58 sycamore trees planted to honor the UW students and faculty who died in the First World War. The design, layout, and construction for the memorial was led by Seattle artist Jon Gierlich, a professor at the Cornish College of the Arts. 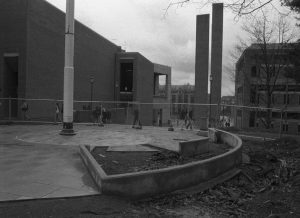 The memorial features three “rings of memory” creating a sculptural plaza, which symbolize the transition from peace to war, and to peace again. These rings are also intended to encourage passerby, and viewers to enter the monument to appreciate the flagpole at its center. The flagpole stands tall with the American flag. At its base, bronze plaques are inscribed with the names of the many fallen UW alumni. All of the names on this bronze list have attended the University of Washington, and died in combat or in direct support of allied forces between 1939 and 1945. Also, the vegetation on either side of the memorial were chosen to represent the Pacific and European Theaters. The project was completed in 1999 and dedicated in 2001.

The memorial has not rusted or been forgotten. In 2005, for the 60th anniversary of the end of World War ll, the UW Alumni Association held the “World War ll: A Day of Celebration” at the flagpole memorial, which celebrated the end of the war and remembered the sacrifice of those from the University of Washington. The memorial which started as just an idea during the 50th anniversary stands tall in the University of Washington to this date, and it will continue to do so for the years to come. 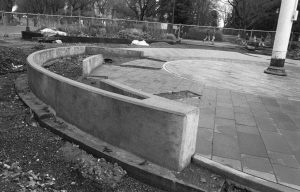