Lariat is a social media research tool for exploring Twitter data. The design stemmed from a series of interviews with social scientists and a participatory design process. One key feature of Lariat that helps social scientists make sense of their data is the ability to generate plots on the fly and use them to drill down into a specific subset of Tweets.

The tool has not been officially released yet, but the current prototype can be found on GitHub. 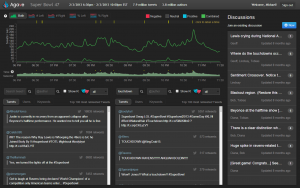 Agave is a web application for collaboratively exploring millions of tweets. You can visit Agave to see how it works on Twitter data that we have collected. Agave’s main features are an interactive timeline showing changes in tweet rate and sentiment over time, searching and filtering, and built-in annotation and discussion with others (requires Twitter sign-in).

Agave is useful for finding the broad characteristics of a new data set, such as key events and topics being discussed. Initial exploratory analysis can help provide a more grounded direction for future analysis. Support for multiple users enables all members of a research team to participate in this phase of the project and to share their findings from within the tool. Agave works great on data gathered using the Twitter Streaming API over a period of hours or days, but longer time spans can also work.

Agave development is on GitHub. You are welcome to download, run, and modify your own version with your own data. Questions and problems can be posted on the GitHub issue tracker.

Once a classifier has been trained, ALOE can use the classifier to label other unlabeled message data. It also features an interactive mode, where chat messages can be entered one at a time for classification.

Hoptrees are a visual navigation interface developed by HDS Lab in collaboration with researchers from Eigenfactor.org. Hoptrees make it easier for people to keep track of where they are and where they’ve been when navigating hierarchical information. For example, they could help you avoid getting lost in your file system, or on a complex hierarchical website. A paper about hoptrees, Hoptrees: Branching History Navigation for Hierarchies, was published at INTERACT 2013.

We have created an open source prototype hoptree implementation in JavaScript issued under both the BSD license and the GNU General Public License.

To support our research on emotion in collaborative work, we are developing Text Prizm, a web application to help you analyze social media content (such as chat logs or Twitter data). Text Prizm will provide the following features: