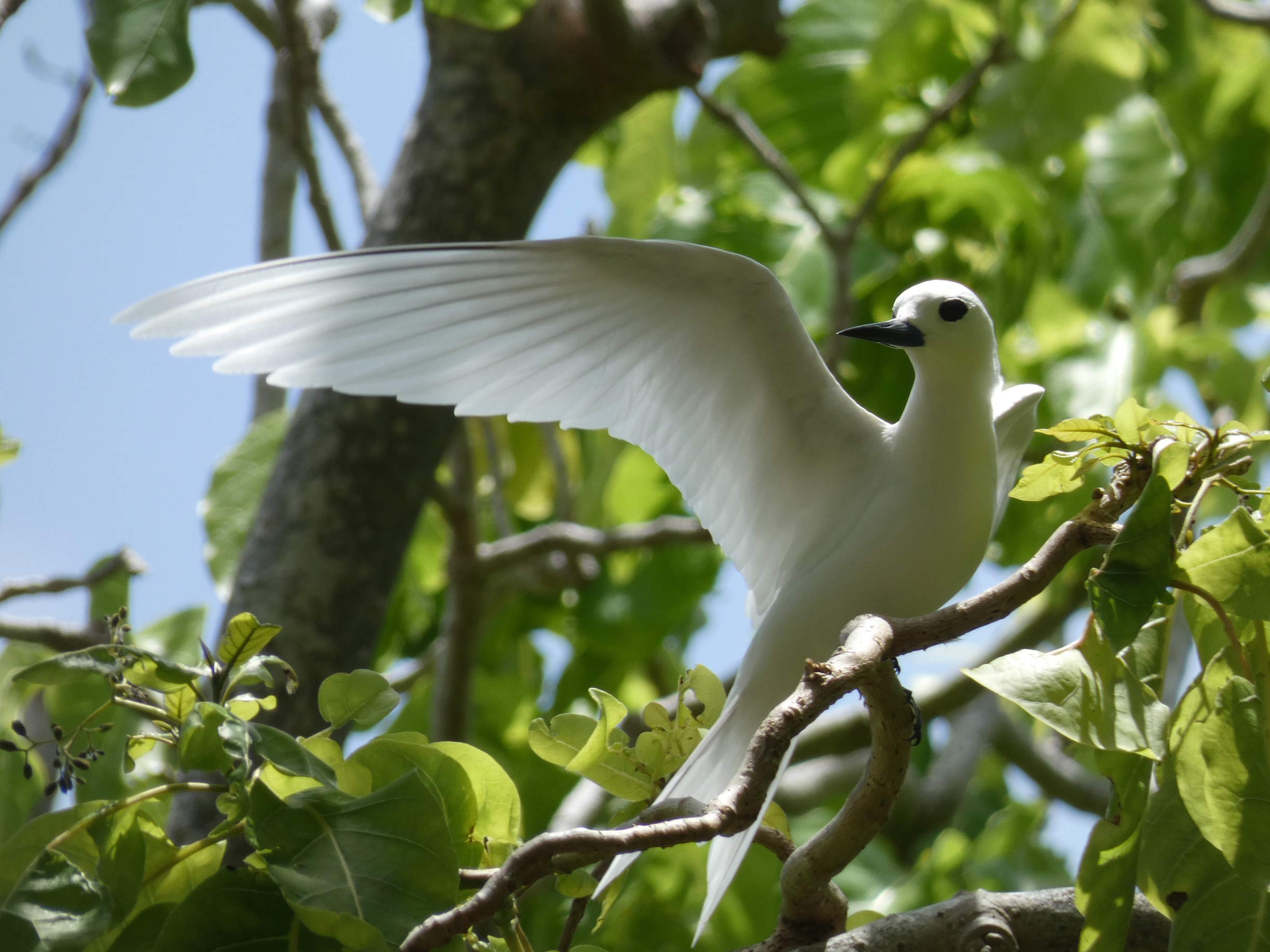 The Quantitative Ecology Lab’s research interests are generally related to the development and application of hierarchical models for estimating animal abundance and occurrence. Beth is particularly interested in better understanding how populations and communities respond to environmental conditions and the expected changes in those conditions due to habitat fragmentation, land-use, and global climate change. Our lab currently focuses on 3 main areas:

Below are some of the projects our lab has worked on in the past and currently. See the lab publication page (and the list on Beth’s page) for a more complete review of our research. 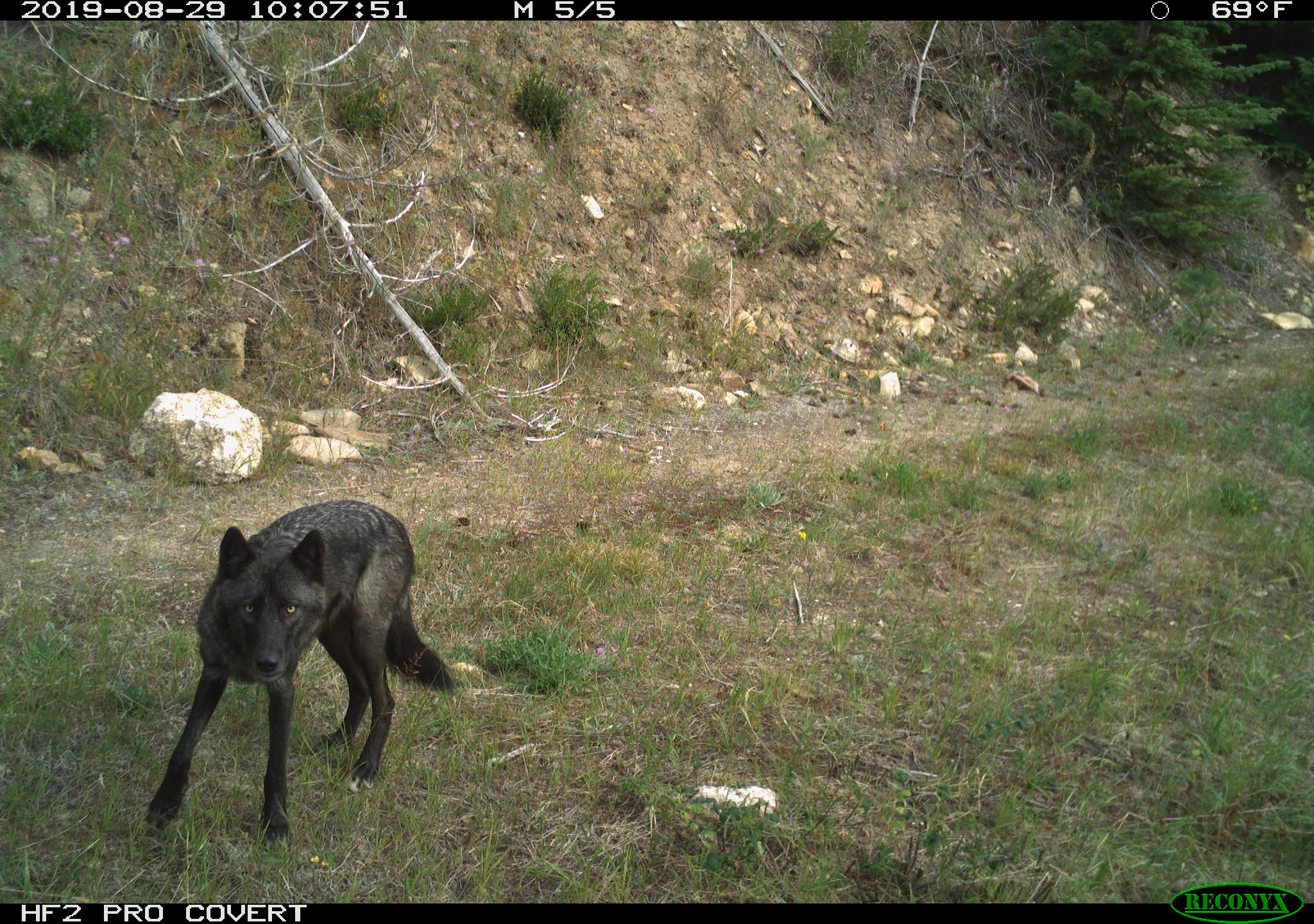 Gray wolves (Canis lupus) are naturally recolonizing the state of Washington. With the return of this predator to a region that is already home to several large predator species, State wildlife officials and stakeholders are interested in how recolonizing wolves will influence ungulate populations in Washington. As a result, the University of Washington and the Washington Department of Fish and Wildlife are collaborating on the Washington Predator-Prey Project to investigate how wolves affect population dynamics of ungulates in a multiple-predator, multiple-prey system.

Although predation events occur at acute points in space and time, the non-consumptive effects of predator-prey interactions occur across a much broader range of spatial and temporal scales. These interactions can shape the habitat use and activity patterns of species in a wildlife community and may ultimately dictate when and where consumptive interactions are likely to occur. The goal of this project is to evaluate how patterns of activity and co-occurrence are influenced by predator-prey interactions relative to habitat features and human activity among a community of ungulates (mule deer [Odocoileus hemionus], white-tailed deer [O. virginianus], elk [Cervus canadensis], moose [Alces alces]), mesopredators (bobcat [Lynx rufus], coyote [Canis latrans]), and large predators (black bear [Ursus americanus], cougar [Puma concolor], wolf) in eastern Washington. In addition, we are evaluating how different sampling methods influence our inferences about these patterns. 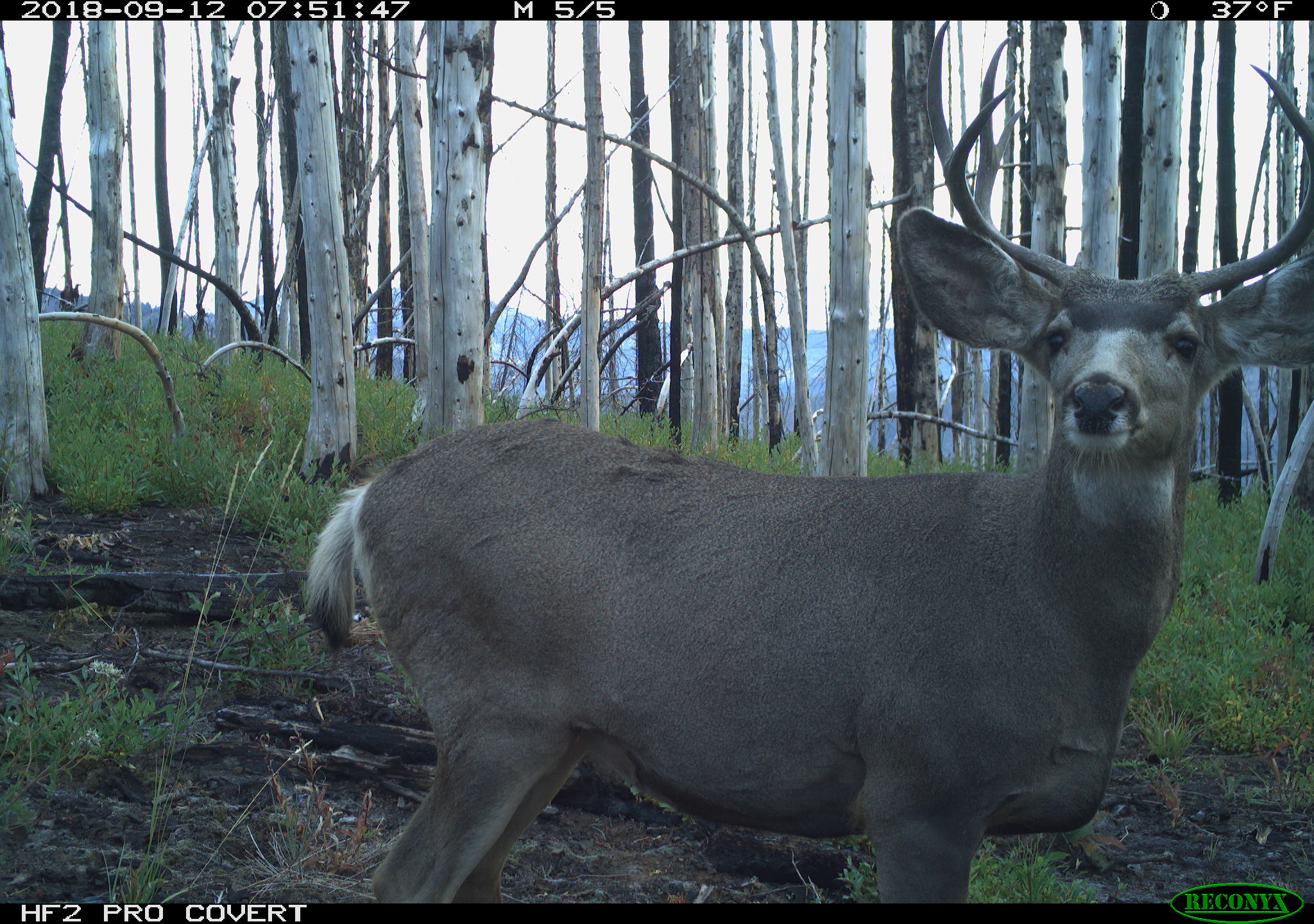 We have deployed 120 camera traps across the two Washington Predator-Prey Project study areas in eastern Washington to collect photo-capture data on this wildlife community (2018 – 2021). With the help of Microsoft’s AI for Earth image recognition technology, University of Washington undergraduate students are processing millions of images to classify the wildlife species detected by these camera traps. In addition, project collaborators have collected location data from over 400 satellite-collared deer, elk, mesopredators, cougars, and wolves in the study areas. We are paring these data with occupancy models, hidden Markov movement models, and other quantitative methods to assess how predator-prey interactions influence patterns of species co-occurrence, temporal partitioning of habitats and camera sites, and resource use for a diversity of ungulate and predator species. The results of this work will help inform wildlife management and wolf recovery in the state of Washington.

WOLVERINE DYNAMICS IN THE CASCADE MOUNTAINS

Wolverines are currently recolonizing Washington’s Cascade Mountains. However, because wolverines prefer habitats with spring snow cover, it is unclear how the Cascades wolverine population will respond to changes in snow cover under future climate change. At the same time, wolverines share high-elevation, snowy habitat with multiple other rare mesocarnivores, including Canada lynx and montane red fox, whose fate under future climate change is similarly unclear.  As such, it is crucial that wildlife managers be able to efficiently monitor wolverines and other mesocarnivores in the Cascades, in order to detect changes in population size and species range and take appropriate management action.
Remote cameras (“camera traps”) are often used to collect data for multi-species monitoring, because they are relatively inexpensive and because species occupancy estimated from camera trap data can be used to detect changes in abundance in some cases. However, for rare species like wolverines, occupancy estimated from camera trap data can be highly biased, due to the species’ low density and large territories. It can also be difficult to create an optimal monitoring framework for multiple species at once, due to differences in habitat use and territory size between species.
To address these issues, we have developed a novel continuous-time multi-scale occupancy model for camera trap data, which can simultaneously account for a species’ low density and large-scale movements over long camera deployment times (e.g. an entire winter). We are using this model in a power analysis to develop a monitoring framework for wolverines in the Cascades. We are also using sensitivity analyses to assess how changes in survey design affect power to detect trends in multiple species’ abundances simultaneously.

SEABIRD STATUS AND CONSERVATION ON TETIAROA 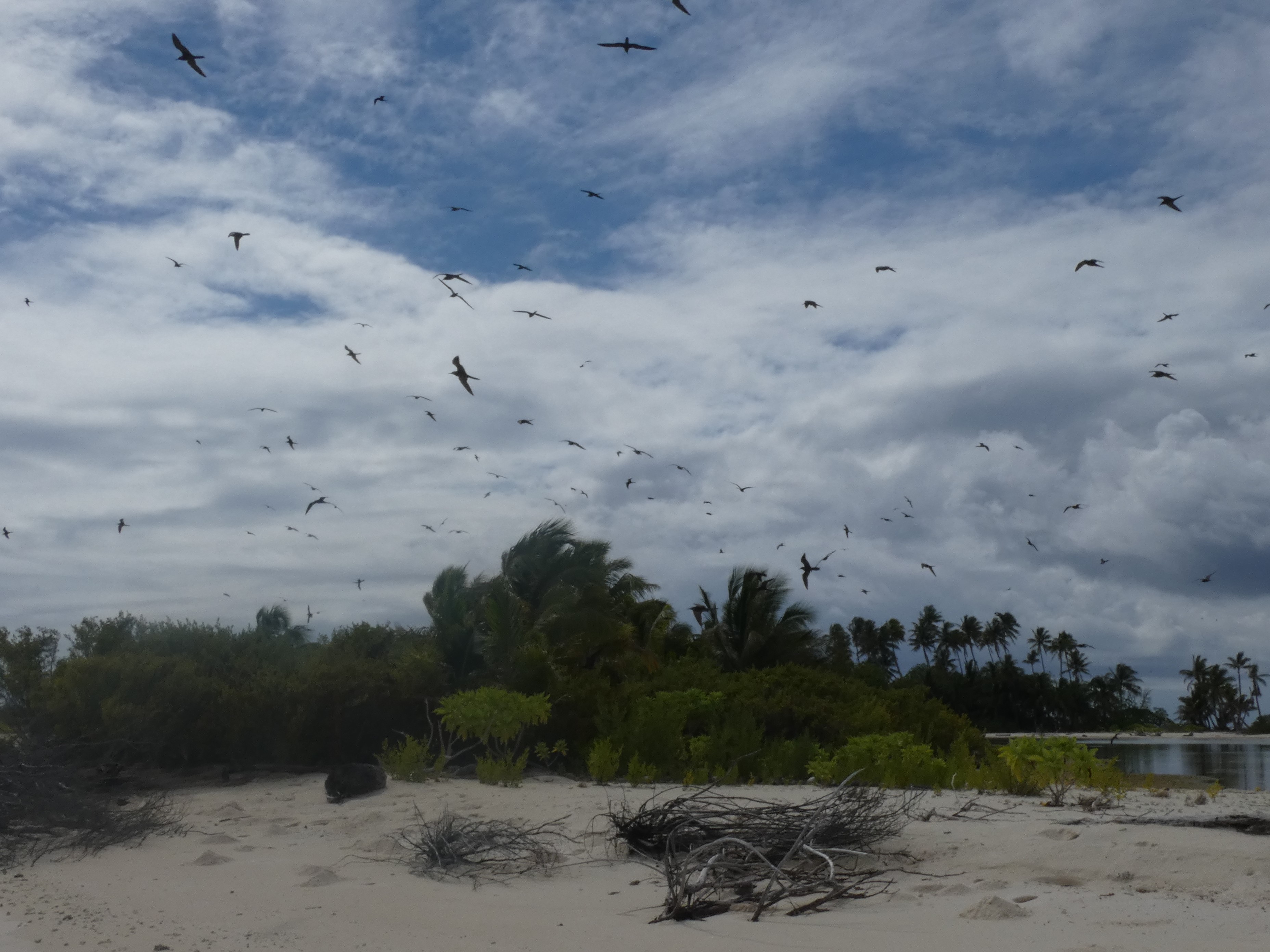 Seabirds are a highly threatened marine taxonomic group worldwide (Sydeman et al. 2012) due to a multitude of issues, including fisheries bycatch, rising sea levels, marine pollution, invasive species, and off-shore wind energy development. The underlying goal of our project is to provide a baseline for the population size and health of seabirds on Tetiaroa.  Tetiaroa, part of the Society Islands in French Polynesia, is a remote atoll in the Pacific Ocean with 10 seabird species and 3 migratory avian species. 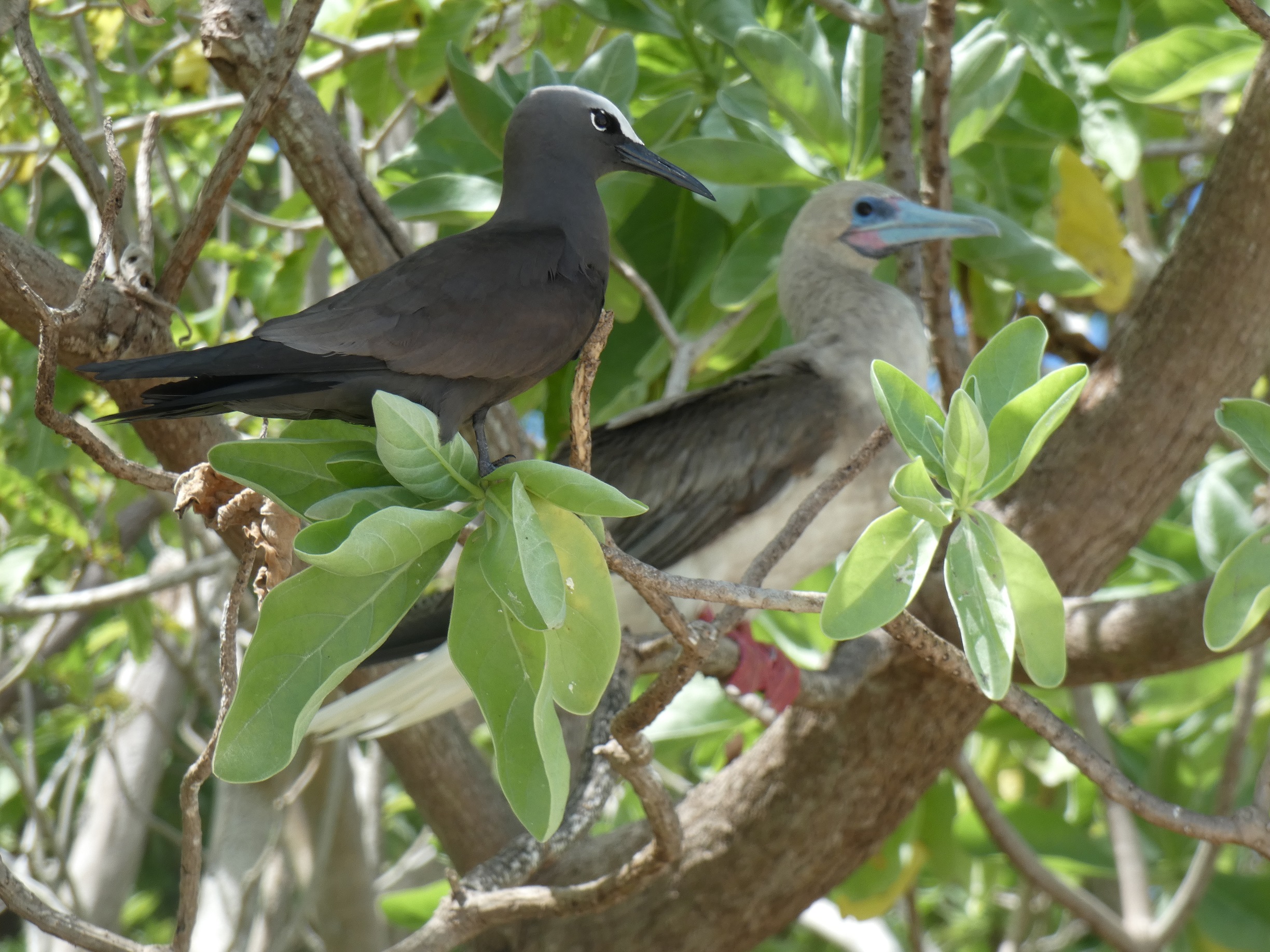 The Tetiaroa Society is actively engaged in rodent eradication across Tetiaroa’s 12 motus to improve seabird habitat. In 2018, we undertook fieldwork on Tetiaroa to determine the best methods for sampling seabirds for demographic rates.  We intensively sampled seabirds using repeated point counts on 4 motus, including one with a recent rat eradication.  We also sampled for microplastics in the waters and sands of 8 motus.  Over the next two years, we plan to expand our sampling to include ringing of seabirds, assessing the potential effects of microplastics on seabird health, and depending on funding to also satellite tag individual seabirds. 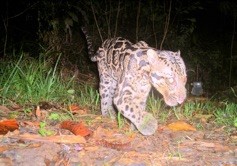 The larger mammals of southeast Asia have been identified by the International Union for the Conservation of Nature (IUCN) and the Convention on Biological Diversity (CBD) as one of the three groups of highest conservation priority worldwide. Although the severe impact of forest loss on SE Asian mammals is well known, the consequences of different forms of forest management practices on species and species communities, their population dynamics, their genetic diversity and individual health remain unknown.

Camera-trapping and leech screening are currently the most suitable methods to study medium to larger mammals in southeast Asian forests. Whereas camera-trapping is a widely established survey method, the extraction of host DNA from terrestrial leeches is a novel and promising tool to study rainforest mammals. Leeches carrying host DNA are easily collected and can yield both species and individual level detection data.
To survey multiple species simultaneously, survey design must be optimised so that it yields adequate data for all species of interest. In this project we develop a survey design for leech collection and camera-trapping targeting terrestrial mammals that yields adequate data for occupancy analysis, and spatial capture-recapture estimation of density. The project is part of a large research initiative led by Dr. Andreas Wilting from the Institute for Zoo and Wildlife Research in Berlin. The surveys will be implemented in several study areas in the central Annamites of Vietnam and the Malaysian state of Sabah, on Borneo, to investigate the effect of forest management (Sabah) and different degrees of poaching pressure (Vietnam) on the terrestrial mammal community.
Funding Agency: BMBF (German Ministry for Education and Research)
Photo credit: Wilting & Mohamed, SFD, SWD

PREDICTING THE DISTRIBUTION AND ABUNDANCE OF SEA BIRDS 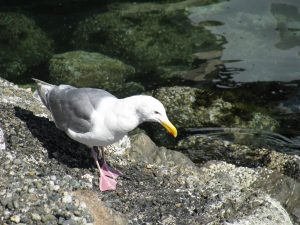 The development of offshore wind energy facilities along the Atlantic coastline may pose potential threats to sea birds, marine mammals, and sea turtles. To better understand sea bird abundance and distributions in relation to proposed wind energy areas (WEAs) off the DelMarVa peninsula (offshore Ocean City, Maryland, to Virginia Beach, VA), two years of baseline survey data were collected using aerial videography and shipboard surveys from 2012-2014. Our goals are to provide statistically robust methods for analyzing these survey data to improve estimates of abundance, habitat relationships, and potential “hot spots” of sea bird populations. To this extent we have developed a new community distance sampling model and are working on a new model to combine the aerial and shipboard surveys to make the most effective use of these datasets that vary in spatial and temporal resolution. This is the first step in understanding the potential risks that maybe associated with offshore wind energy development.
Partners: Biodiversity Research Institute, City University of New York, and Duke University
Funding Agency: DOE

In addition to our work off the coast of the DelMarVa peninsula, we are also working to determine patterns of species occurrence off the coast of Rhode Island and Massachusetts. We have developed community occupancy models for wintering species (17 species in total). We included sea surface temperature, bathymetry, and chlorophyll to help inform patterns of species occurrence. We find low detection probabilities for many species (<0.3) and see variation in the patterns of occupancy and habitat relationships between these two areas. Partners: University of Rhode Island, Mass Audubon
Funding Agency: USGS Patuxent Wildlife Research Center 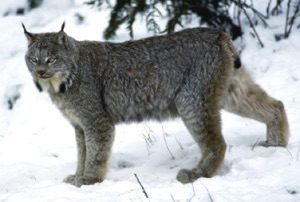 OCCUPANCY MODELING OF CANADA LYNX
Noninvasive surveys are increasingly used to study rare or elusive species. For over a decade, Superior National Forest has collected snow tracking and genetic material data on ESA-listed Canada lynx populations across northern Minnesota. In this project we applied an occupancy model to snow tracking data to help monitor lynx populations in Superior National Forest. These approaches will provide baseline population information applicable to local and regional lynx recovery efforts. Additionally, this study helped refine an occupancy sampling design protocol, which has now been implemented for four years across Superior National Forest and we are reanalyzing the data with a dynamic occupancy model to help monitor lynx populations across the region.
Funding Agency: U.S. Fish and Wildlife Service
Photo credit: U.S. Fish and Wildlife Service 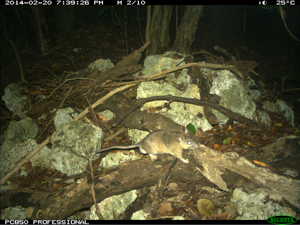 SPATIAL AND TEMPORAL DISTRIBUTION OF ENDANGERED SPECIES
The Lower Keys marsh rabbit (Sylvilagus palustris hefneri) and the Key Largo woodrat (Neotoma floridana smalli) are both federally endangered subspecies endemic to the Florida Keys. Although a suite of compounding factors threatens the two species, the presumed threats are habitat loss and fragmentation due to development, habitat succession, and sea level rise. Concurrent with human development, invasive predators such as domestic cats (Felis catus) and native but resource-supplemented mesopredators might also be a major threat to the small mammals. Management strategies have focused on habitat restoration and variable amounts of predator control over the years. However, research on predator population dynamics and their interactions with the small mammals is limited and mostly anecdotal. The objectives for our study were to integrate noninvasive sampling and modeling procedures to first estimate predator abundance and then estimate marsh rabbit and woodrat occurrence and co-occurrence with these predator populations. We used camera traps set to specifically target the small mammals and separate but concurrent surveys of predators to determine direct and indirect effects. This work has resulted in 3 publications to date, which can be found on our lab publication site with Cove as the first author.
Funding Agency: U.S. Fish and Wildlife Service

FLORIDA PANTHERS
Mark-resight models are a less invasive alternative to capture-recapture models and an important monitoring tool for species that lack natural individual marks. Using data from two 9-month camera-trapping surveys conducted within the core range of the endangered Florida panther (Puma concolor coryi, Fig. 1) in southwestern Florida, we developed a spatial mark-resight model that incorporates telemetry location data from radiocollared individuals to improve estimates of population density.  This work resulted in a paper in the Journal of Applied Ecology, listed under the lab publications for 2013, as well as a number of reports provided to the funders.