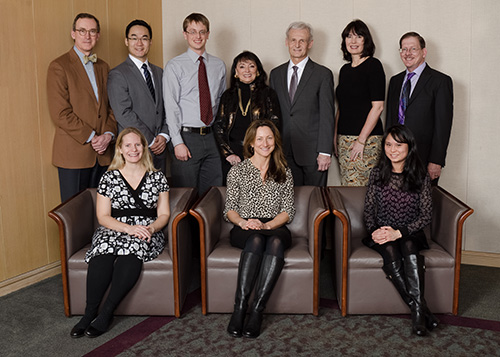 The 2013-2014 Magnuson Scholars, members of Senator Warren G. Magnuson’s family, former congressional staff members, and the Magnuson Chair in Medicine, gathered on February 10, 2013 to celebrate the late senator’s legacy and recognize the outstanding graduate and post graduate work and research of this year’s Magnuson Scholars. The six Magnuson Scholars provided compelling updates to the assembled group regarding their current research focus and future plans. Each scholar represents one of the six University of Washington Health Sciences Schools and was selected on the basis of their academic performance and potential contribution to research in the health sciences;

Dr. David Anderson, Executive Director of Health Sciences Administration, opened the event by reflecting on the importance of Senator Magnuson’s legacy and the scholars’ achievements. Senator and Jermaine Magnuson’s daughter and granddaughter, Juanita Garrison and Leslie Garrison, congratulated each student and encouraged them individually and collectively to pursue their academic and research goals. Dr. Bruce Ransom, Professor and Chair of the UW Department of Neurology and the first Warren and Jermaine Magnuson Professor and Chair of Neurology, outlined the significant impact the Senator’s work has had on biomedical and translational research and charged the scholars with gaining a deeper understanding of Magnuson’s foundational and visionary efforts towards improving the nation’s health. Former Magnuson staffers, Gerry Johnson, Gretchen Bakamis and Lynn Hogan related personal stories of their time on the Senator’s staff and how his commitment to public service continues to inform and influence their lives and careers. Bill Bakamis recounted his involvement in working with the late senator’s widow, Jermaine Magnuson, and others to leverage decades of federal and state relationships to establish the endowment in 1991 in honor of the late senator. The Magnuson Scholars Program is part of the Warren G. Magnuson Institute for Biomedical Research and Health Professional Training. Support for the institute comes from two grants from the U.S. Department of Education, matching funds from the State of Washington and donated funds.