Hey, Maybe I Can Do That

One of the things that has always set MEDEX Northwest students apart from those of many other PA training programs across the country is the amount of previous medical experience that they bring with them into the program. MEDEX currently requires a minimum of 2000 hours – averaging a total of 6.5 years – of previous experience for all applicants, while strongly suggesting that competitive MEDEX candidates will have more than the stated minimum.

Cue Gwen Jackson. Clocking in at some 20,000 patient hours over the course of 13 years by the time she applied to join MEDEX Seattle Class 49, it’s clear that Gwen had that particular prerequisite nailed. And then some. “Oh yeah,” she says now with a smile. “I had a lot.” Gwen Jackson with her family April 2015: Gwen with her two youngest children, her brother and his family (wife + 2 daughters) and her mother at Gwen’s Florida home before moving to Seattle. July 2009: Gwen and family at the birth of her youngest child.

A  resident of Panama City, Florida, Gwen Jackson began logging those hours – and building what was to become a healthcare career – as an x-ray tech. After a couple of years of that, she moved into nuclear medicine and PET/CT imaging, which she did for another 11 years or so. It’s from working with oncology patients in particular during those years that Gwen discovered a passion for healthcare in its broader sense, one that focuses on a continuity of care and an engagement with patients. 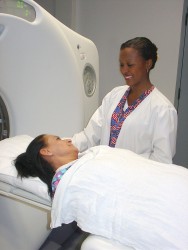 Gwen with the PET/CT scanner and a patient.

“The PET/CT scans that we did on patients often monitor their treatment,” she explains. “They would come for diagnosis, but then as they were getting treatment over time, they would come back to see how well their treatments were working. So I definitely developed relationships with my patients.”

At the same time, Gwen was building up her life and her opportunities outside of work. She went back to school and received a bachelor’s degree in business from the University of Florida. She got married and started a family. And she began thinking about PA school. But the timing for that move wasn’t yet working out.

“So I pursued other things, “ she says. “I started taking on some leadership roles in my job, and I enjoyed doing that. But I realized that patient care is my passion, and that’s where my heart is. So, maybe two and a half years ago, I started seriously just pursuing PA school, going back to school, getting the prerequisites.”

And now here she is, a member of MEDEX Seattle Class 49. But why MEDEX, we can’t help but wonder? Did Gwen consider schools closer to home in Panama City?

“Well, getting into PA school is super competitive, of course,” she explains. “So I applied to a handful of schools. As I said, I had graduated from the University of Florida, and I was accepted to their PA program. But I also applied to schools out West, so I had a couple of choices out here as well. We wanted to come out West just because we had the opportunity to do something totally different, and also to be closer to my father-in-law. And when it came down to the choices I had, I felt like MEDEX was the best fit for me. I like the collaborative atmosphere. I like the focus on primary care and underserved populations. Those are things that really resonate with me.” 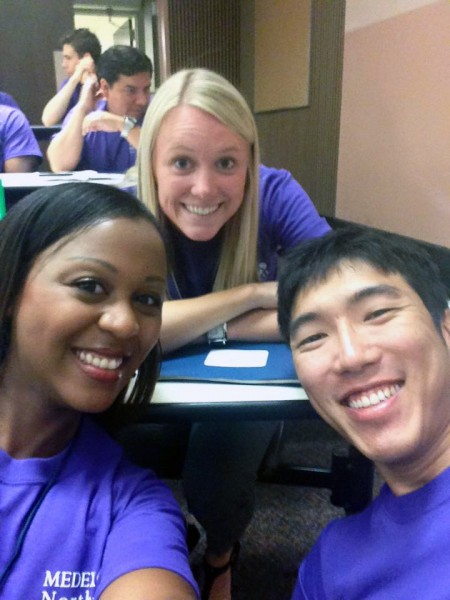 The Seattle area also proved to be a place where CJ, Gwen’s husband of 10 years and a civil engineer, had a number of job options. He landed one at a small geotech firm in Bothell, and the family moved to Bellevue in time for Gwen to start her first year of study at MEDEX. “We have three kids. My stepson is 20, and he is in college at the University of West Florida studying psychology. I also have a nine-year-old daughter and a six-year-old son, and they go to school here in Bellevue. I love being here. I love being a PA student. My kids keep me busy, but they give me so much life and so much purpose.” Gwen pauses, reflects, and then adds “I obviously have support from a lot of my family because there’s no other way I could do it.”

As she describes it, Gwen’s childhood was not an easy one, and so recognizing the family support she enjoys today is doubly important to her. “My dad and mom divorced when I was four, so we moved from Tallahassee to Panama City. My mom has schizoaffective disorder, so my younger brother and I grew up with a chronically ill mother. That was challenging. We grew up fast. And of course, my mom couldn’t work, so we never had very much.”

“I love my mom dearly,” she continues, “and I am still her main support, along with my younger brother, especially now that I’m here. But when I was growing up, I just remember saying, ‘I don’t want to live off the government. I don’t want to live like this.’ I had a lot of self-motivation, and I was very lucky to have it, because I don’t feel like … well, I just feel like it was a blessing, because I see myself in so many other people, and in situations that could have gone differently. So I just feel very blessed and fortunate that I had a lot of self-motivation.”

Gwen goes on to tell us of other important influences in her life, including several teachers who “saw things” in her and supported her efforts to learn and grow. “I have a strong faith, and I feel like God placed the right people in my life at the right time always. I always had some kind of support, some kind of push, some kind of guidance. And I guess that’s where I get my passion for helping the underserved. It really starts there. I want to do that for others.” 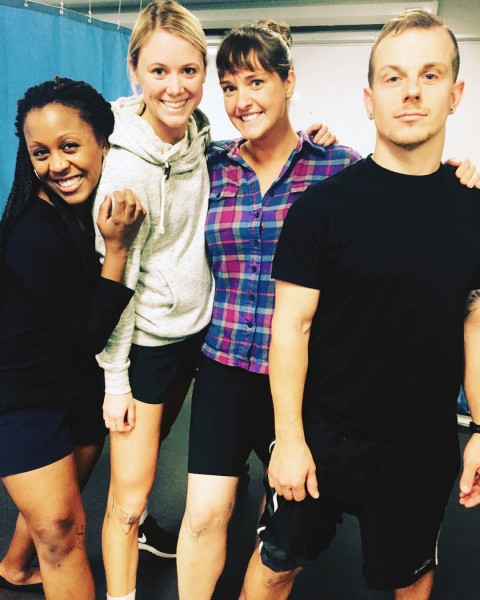 As Gwen goes on to describe her work and her experiences so far as a MEDEX student, it becomes abundantly clear that she is already paying that push, that desire, that passion forward. To begin, she has participated in an outreach effort for underserved patients in Skagit County as part of the class Outreach/Diversity Committee. She’s also the MEDEX Student Diversity Committee Representative. “What I’ve done so far is head up these things called Lunch and Learns,” she explains. “The first speaker we brought in was actually my father-in-law. He’s a family practice physician from Kingman, Arizona. He spoke to us about his work with the Native American population there, who are close to his heart.”

Gwen is also on the Diversity Committee of the Graduate and Professional Student Senate, in an effort to establish a connection between the Senate and MEDEX. “We just hosted a homelessness focused series this quarter” she tells us. “We had the support of MEDEX faculty. And I’m so proud of our class! We donated three-months worth of socks to the 45th Street Clinic during this event.”

As we wind up our discussion with Gwen Jackson, it comes as little surprise that her future plans at this stage are focused on primary care. “I would love to be in an urban area where I am a familiar looking face,” she says. “Someone easy to relate to. A familiar smiling face that will be a comfort to people. And also an inspiration, especially for young people. To see someone who looks like them and realize ‘Hey, maybe I can do that’.”

Dennis Raymond is the Communications Manager for MEDEX Northwest in Seattle, Washington. He can be reached at medexcom@uw.edu.