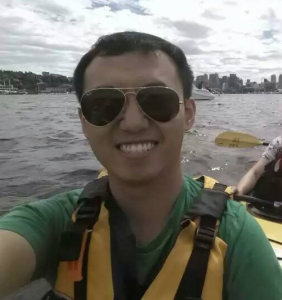 Bio:  Xuezhe Zhou received a B.S. degree in Materials Science and Engineering from Sichuan University in 2012 after pursuing undergraduate research in the metallic materials laboratory of Prof. Ying Liu where he focused on developing gradient nanoporous copper with a dealloying method. During 2010-2011, he was also chosen as an exchange student to study at Arizona State University where he worked in Prof. Karl Sieradzki’s lab focusing on dealloying nanoscale structure and characterizing the behavior with thermodynamic analysis.  Since 2012, he has been pursuing a Ph.D. in Materials Science and Engineering with Prof. Peter Pauzauskie at the University of Washington where his dissertation focuses on the synthesis, characterization, and simulation of fluoride host materials which can be locally cooled by NIR optical tweezers in liquid media.