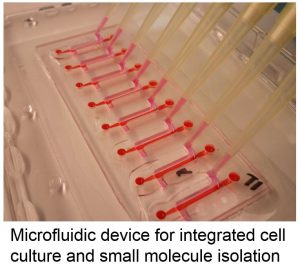 Multikingdom signaling — such as signaling between fungi, bacteria, and plants — plays a key role in the environment and agriculture; symbiotic microbes significantly boost crop yields, and pathogenic microbes can infect or contaminate entire batches of crops. Similarly, signals such as oxylipin immune mediators and microbial secondary metabolites contribute significantly to human health and infections. Advanced culture models are required to recreate the salient features of these complex multikingdom systems, and novel sample preparation methods are required to isolate key effector molecules from the chemical milieu. We combine environmental and organotypic culture models with novel methods for small molecule isolation and advances in mass spectrometry to study the metabolomics of signaling in diverse microbiomes.

Steroidogenesis, the synthesis of steroids, is a critical driver of normal development. Many toxins and toxicants (synthetic compounds) have been found to inhibit or hijack steroidogenic pathways, resulting in birth defects or increased risk for steroid-responsive cancers, including prostate and breast cancer. We develop in vitro microscale assays to identify and study compounds that interfere with steroidogenesis. One of our goals is to determine how the action of these compounds is affected by microenvironment, such as extracellular matrix composition and supporting cell types cocultured with steroidogenic cells.

Testis on a Chip

Male fertility has declined worldwide in the past several decades. One possible reason is that exposure to environmental chemicals may disrupt the interactions of cells in the testis that are critical for normal sperm development. We are interested in understanding the role of supporting cells in the testis and the molecular messages that are important for regulating male hormones (such as testosterone) and sperm development. Specifically, we study testosterone-producing Leydig cells. Our goal is to create a model system to investigate the hormonal signals produced by human Leydig cells and the responses of other testis cells using a ‘testis on a chip’ microfluidic model. We have designed a microscale cell culture system that enables the study of very small numbers of rare human cells. We plan to investigate how environmental chemicals may impact molecular messages among testis cells. A better understanding of how Leydig cells interact with other cells in the testis will be important for understanding how to improve these signals in men with low testosterone or impaired fertility. Our goal is to promote and preserve male fertility. We are also focused on how hormone therapies administered to transgender women affect fertility. 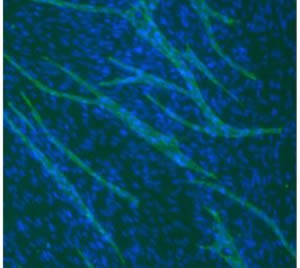 We develop functional readouts within our engineered in vitro microenvironments to better understand the effects of small molecules on biological processes. For example, angiogenesis (the formation of blood vessels from existing blood vessels) plays an important role in development, wound healing, and many diseases. We have developed a microscale cell-based assay that responds to complex pro- and anti-angiogenic factors with an in vitro readout for vessel formation. We are incorporating this angiogenesis assay with microscale metabolomics methods to identify the chemical factors regulating blood vessel formation in disease.