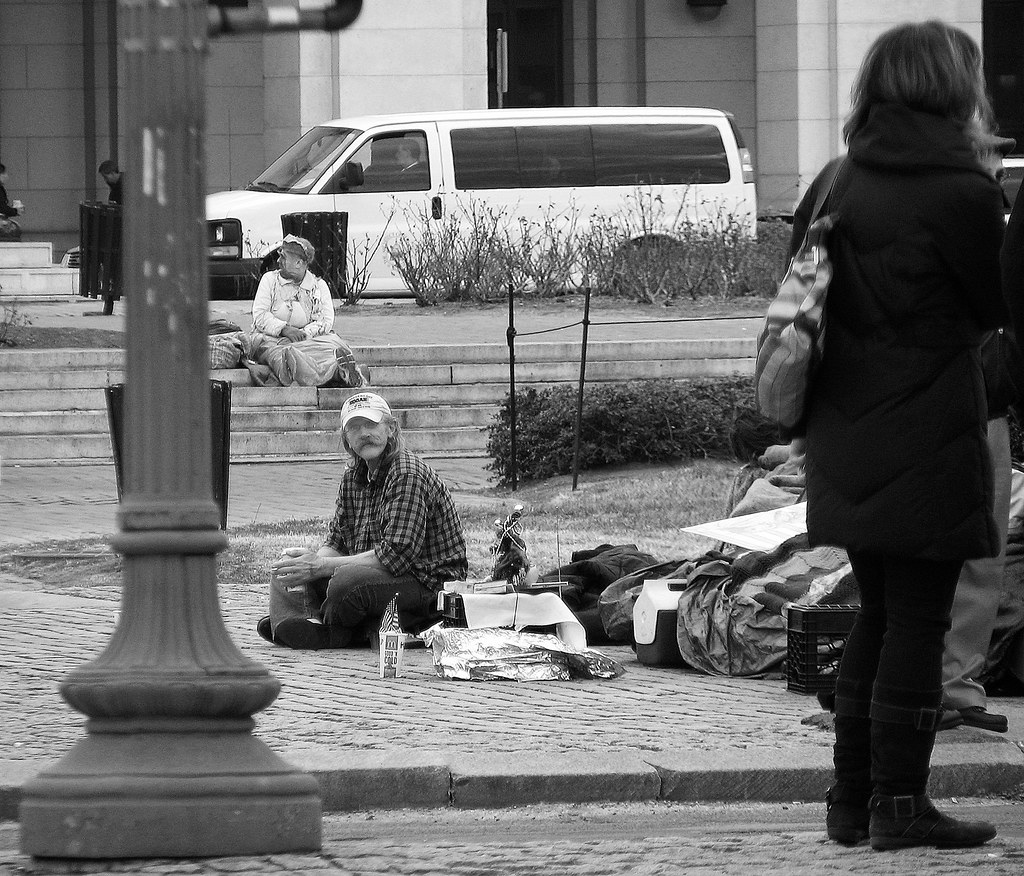 Unlike many people her age, Carla finds herself needing to take multiple naps a day, typically in her partner’s car, just to feel well-rested. She is usually tired from the previous night spent in a nearby homeless shelter, where the surroundings are often volatile and make it difficult to fall and stay asleep. It’s not just her sleeping conditions that have led to her tiredness, however: Carla just found out that her leukemia is back.

“The first thing you notice is the fatigue,” she said during a follow-up interview about her participation in our study. “You’re really tired no matter how much you sleep. It’s actually weird that I found out [about the leukemia] during the study because I was paying more attention to my sleep patterns.”

Carla is a 23-year-old woman currently experiencing homelessness. She was first diagnosed with leukemia when she was 6, the result of a rare genetic mutation passed down to her from her mother’s side of the family.

Around the same time she was diagnosed, her father went to prison and her mother became unable to take care of her. Carla went to live with her aunt, who helped her get into treatment at Seattle Children’s Hospital. She entered remission when she was 9, but her problems didn’t stop there.

“The first time I became homeless was because my aunt had an abusive boyfriend living with us,” said Carla. “I eventually said, ‘well, if you’re not going to do something about this, then I will.’ So, I left home at 16 and went to live in a group home”.

Carla entered the foster care system, which she described as “Frankenstein-ing the last two years of my high school career, jumping from one person willing to house me to the next.” Once she graduated high school, she found herself on her own and began staying at homeless youth shelters in the Seattle area. She managed to complete some college courses but found it ultimately unsustainable and left.

“I completed, like, half a degree and made it out with $4,000 in debt. I left because I didn’t have any foundation under me,” Carla said. “The dorms can only do so much to cushion that blow. Having a mentor would have helped.”

Carla is currently trying to secure housing with her partners but cites lack of affordable housing as a significant barrier. While she used to be able to find work with temp agencies, her increased fatigue has made this more difficult.

“As soon as I was diagnosed people started congratulating me because they thought I’d be able to get government benefits and find housing,” she said. “Everyone thinks having an illness or disability is a guaranteed one-way ticket out of homelessness. It’s not. I’m basically just going through the same thing every other person with cancer goes through, except I’m doing it homeless.”

She emphasized the importance of holistic solutions to homelessness, and the idea that keeping people off the streets is not as simple as providing them with housing.

“Everyone wants to solve housing first in a person’s life, because that’s the biggest problem, right? The thinking is, ‘if we can just give them a house, everything will be okay.’ But as a matter of fact, there’s a hierarchy of needs that you have to meet before reaching the housing goal,” she said.

“You have to help improve peoples’ quality of life. Imagining a dream scenario where a house just magically drops out of the sky is not helping crises someone is having right now. It’s not getting me the medical help I need, it’s not providing therapy or rehab for people who need it, it’s just saying, ‘we’ll drop you in a house and then that’s your problem fixed and you can make it on your own from now on, right?’”

In Carla’s ideal world, homeless shelters would function like miniature emergency rooms, complete with basic medical care, crisis counseling and staff that refers people to resources that can help them secure and maintain housing. In her experience, case managers at shelters are underfunded and overwhelmed, leading to inconsistent advising and a focus on temporary fixes rather than long-term solutions.

“There’s one case manager for 50 people at the shelter I’m staying at now,” she said. “They’re told to solve the housing crisis, when really they should be piecing together each person’s wellbeing. People want a house right now and can’t see a world where they’re safe and stable in a homeless shelter. You fix that by improving the shelter so that people are willing and able to stick around long enough to solve their problems.”

In addition to a lack of resources, Carla observed that shelters are often unsafe and unable to make accommodations for people with special needs, making some people experiencing homelessness less likely to seek help.

“I’ve found it hard to convince people that they should give me accommodations for my life-threatening illness. There’s very little they’re willing to adjust for me,” she said. “There was even a young pregnant woman that came into the shelter and had to enter a lottery to get a bed, but she was really scared of staying outside because of her health. The shelter was like, ‘well, we can’t just make special accommodations and play favorites.’ I get not playing favorites, but it’s a pregnant woman!”

Problems in the shelter are often so severe, Carla says she sleeps better in her partner’s car than in a shelter bed. Usually she manages to avoid sleeping on the street but acknowledges this is not an option for many people without access to resources like a car. “It’s like a little pod and nobody can touch me,” she said.

Despite her circumstances, Carla finds pleasure in hobbies like sewing, and has managed to find a chosen family that she can share her life with. “It’s a lot of happy accidents,” she said. “You collect people, it’s what you do. Everyone has more capacity than they think, and humans are really good at adapting.”

When asked what are the biggest misconceptions she encounters about people experiencing homelessness, she said people often assume it’s because of some personal failure.

“There has to be something I did wrong, right? The truth is it could be you, really easily,” she said. “All it takes is one or two missed rent payments, and you’re right here with me. It’s enough things happening to you at once that you just can’t fix.”