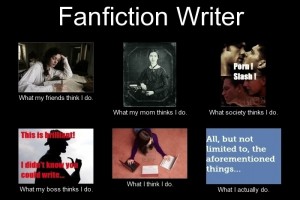 The internet has opened up unprecedented opportunities for people of all ages to discover and connect with others who share their interests. Among the most popular interest-based communities are those that bring together fans of various media texts, including movies, TV shows, music bands, novels, and video games. Whether formed around classics like Star Trek, Doctor Who, or Blade Runner, or newer media texts such as Breaking Bad, the Twilight series, or World of Warcraft, these online fan communities make it easier than ever before for people to meet other fans and engage in discussions and creative endeavors around their mutual interests.

In the past 20 years, amateur fanfiction writers, many of whom are young people between the ages of 13 and 25, have published over 61.5 billion words of fiction in a single online repository alone, Fanfiction.net, an amount that rivals the Google Books English fiction corpus covering the past five centuries. This site included nearly 7 million stories, more than 176 million reviews, and over 1.5 million authors in January 2017. Far from mere shallow collections of pop culture, fanfiction sites such as Fanfiction.net, Archive Of Our Own, FIMFiction, Whofic, and many others (including sites not exclusive to fanfiction such as Wattpad, Tumblr, LiveJournal, and Reddit), are accumulating significant evidence that sophisticated informal learning is taking place online in novel and unexpected ways.

The Seven Attributes of Distributed Mentoring

We discovered a new kind of mentoring, which we call distributed mentoring, that is uniquely suited to networked communities, where people of all ages and experience levels engage with and support one another through a complex, interwoven tapestry of interactive, cumulatively sophisticated advice and informal instruction.

The publications listed below detail our theory of distributed mentoring, exactly how it occurs, its seven attributes, aggregation, accretion, acceleration, abundance, availability, asynchronicity, and affect, and how each of these attributes are being utilized by young people to engage each other in writing and learning. Each of these characteristics is supported by networked technologies. Abundance, for example, describes the sheer volume of feedback accessible to the author. Availability refers to the persistent and public nature of reviews, which facilitates sustained exchanges and relationships among community members.

This ongoing research project studies informal learning and distributed mentoring in online fanfiction communities, the roles that identity, motivation, and emotion play in young people’s informal learning online; and the novice to expert trajectories made available in different online fan communities. This research group has shed light on each of these areas of inquiry through ethnographic investigation and large-scale quantitative analysis of online fan communities currently popular among U.S. teens. We have published a CSCW 2016 paper on our research (PDF), an intro for the general public in the School Library Journal (link), a CSCW 2017 paper (PDF), a CHI 2017 paper (PDF), a Connected Learning Summit 2018 paper (PDF), a webinar (link), a blog to give back our findings to the fanfiction community, and a book in August 2019.

Writers in the Secret Garden

Our new book, Writers in the Secret Garden (MIT Press, August 2019) describes five years of research in detail, providing an in-depth exploration of the unexpected ways young people learn from each other through writing fanfiction online. With a foreword by Casey Fiesler and endorsements from Henry Jenkins, James Paul Gee, and Rebecca Black, we hope researchers from multiple domains will find the book useful and interesting. More details about the book can be found on this website, and it’s available for preorder from Amazon here.

We have found that the novel concept of distributed mentoring plays a positive role in fanfiction authors’ development as writers, and we have discovered measurable evidence of this effect. We scraped stories, reviews, and associated metadata from fanfiction sites and are currently applying data science techniques (machine learning, statistical analysis, data visualization) to investigate the relationship between distributed mentoring and writing quality (e.g., grammar, reading level, lexical diversity).

Kodlee Yin, Cecilia Aragon, Sarah Evans, Katie Davis. Where No One Has Gone Before: A Meta-Dataset of the World’s Largest Fanfiction Repository, Proceedings of CHI 2017: ACM Conference on Human Factors in Computing Systems (2017). PDF.