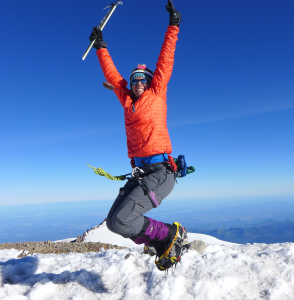 I joined the BPSD program in 2013, after graduating from Cornell University in 2012 and taking a gap year to backpack and travel. Upon entering, I had a general interest in protein structure and dynamics but wanted to further explore the fields of structural biology and biophysics before settling into a specific research field. I liked that the program was flexible and interdisciplinary to enable this. During my first year in BPSD I became fascinated by the study of intrinsically disordered proteins. In the spring of 2014, I joined the labs of Abhinav Nath and Rachel Klevit to work on a project involving the amyloidogenic protein tau. Using a combination of NMR spectroscopy, fluorescence, and various other biophysical techniques, I am working to characterize the interactions between tau and heat shock proteins. Although my co-advisors work in entirely different departments on campus, as a part of the BPSD program I was able to join both labs and take advantage of their complementary areas of expertise.

The city of Seattle was also a huge draw for me. I love being outdoors, and I was already an avid hiker when I started graduate school. I grew up in Ohio, so the thought of living just an hour’s drive from the mountains was enticing and novel. In addition to hiking and backpacking, since moving to the state I’ve also begun climbing, mountaineering, and cycling. Washington’s natural beauty continues to take my breath away, even after living here for two years. Seattle is a great city to live in, with a lot of fun pockets to discover. When I’m not out exploring the mountains or in the lab, I love biking around the city, trying new foods, and visiting the numerous coffee shops and breweries we have here. 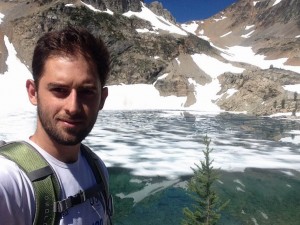 I am Benjamin Basanta, I’m from Argentina. I got my Biology degree at Universidad de Buenos Aires in 2012 and then joined the BPSD program in 2013. I chose BPSD at UW because it brings together great research groups from many different departments, and specializes in protein biochemistry and design. My main interests are protein engineering and the structure-function relationship. These topics led me to rotate in the Baker, Thomas and Nath labs. I joined the Baker lab, where I work on design of de novo small-molecule binding proteins that could be used as biosensors.

Before I came to Seattle I did a few camping/hiking trips in Patagonia and the Argentine Sierras in Cordoba, I didn’t have to give up camping when I came to the State of Washington, I can actually do it more often now. My favorite hikes have been in the North Cascades (Black Peak) and the Olympic Peninsula (Grand Valley). I also enjoy Seattle’s food diversity and its small cafés. I never feel too far from home here, I can just go down town and get the ingredients for a lot of Argentine dishes.

I came to UW in the fall of 2011 after graduating from the University of Massachusetts Amherst with a B.S. in biochemistry and a minor on physics. My interests in these two fields had led me to undergraduate research in a protein-folding lab at UMass, where I learned what really motivates me: understanding biological processes at the atomic level, specifically protein structure and dynamics. I knew I wanted to continue to molecular biophysics research into graduate school, and the BPSD program at UW seemed the best fit. I was immediately drawn to the independence afforded to the graduate students via tailored, elective-based coursework and an incredibly diverse range of research topics.

I joined the lab of Rachel Klevit in the Department of Biochemistry, where part of the lab studies the structures and functions of human small heat shock proteins, a class of molecular chaperones. My project focuses on the variety of structural conformations adopted in the poorly understood N-terminal domain of a human sHSP. The oligomeric structure of sHSPs and their function have a complex relationship that is strongly affected by stress-induced phosphorylation and disease mutations in the N-terminal domain. My goal is to determine the local structural effects of these modifications in order to understand their global affects, using a variety of biophysical techniques, but primarily NMR spectroscopy to elucidate atomic-level structural details. Over the years I’ve focused on learning more about the instrumentation, theory, and practical applications of these techniques so that I can help others. I find nothing more exciting than helping someone characterize a particularly puzzling protein or complex.

When visiting UW, I immediately fell in love with Seattle. Having grown up in a small town, I wanted to try living in a city, and Seattle seemed the ideal transition step, as there’s plenty of green around and it’s not overwhelmingly large. I also really appreciate the milder climate and I love being surrounded by water; I try to get on some kind of boat reasonably often. I enjoy exploring the quirks of each neighborhood, especially the diverse selection of restaurants. Seattle is also pretty pet-friendly, so I spend a lot of time checking out the numerous dog parks with my beagle.