Last week our very own Dr. Caitlin Hudac presented unpublished data at the 2019 International Society for Autism Research (INSAR) annual meeting that showed how disruptive mutations either to CHD8 – a top autism gene – or genes CHD8 controls may define a subtype of Autism. These mutations have been seen to related to similar behavioral characteristics, like enlarged heads (Brenna Boyd in a poster at INSAR) and severe social problems (Dr. Jen Beighley and Dr. Hudac, under review). By looking at these mutations as a subtype, this will help to bridge how the impact of these genes at a molecular level therefore creates behavior that we can observe.

Through looking at children with disruptive CHD8 mutations or a mutation to one of six genes that CHD8 regulates, it was found that these mutations largely affects social behavior, everyday functioning/intelligence and unusually large head size. Compared to mutations of target genes, CHD8 participants tended to have the most social problems on average, but also had the best adaptive skills (Beighley, Hudac). Though timing of development of large head differs between CHD8 mutations and target genes (Boyd), they had common electroencephalography (EEG) brain responses which may reflect an ASD-associated early enhanced  hypersensitivity but a lack of sustained response to certain noises. These findings could underlie some of the sensory sensitivities that characterize CHD8 and related genetic groups.

Full article can be found here on spectrum news: https://www.spectrumnews.org/news/targets-top-autism-gene-may-define-form-condition/ 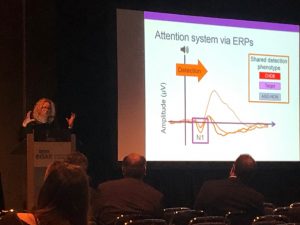