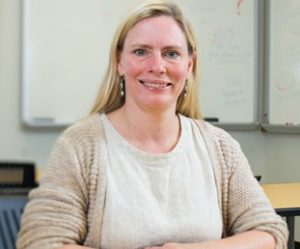 Jennifer Turns has worked at University of Washington for more than a decade.  She is known for supporting students in  reflection on and appreciating their learning experiences. In addition, she was an associate editor of the Journal of Engineering Education and has been involved in several projects related to engineering education.

The profile below was authored by Aisha Mahmood, Universiti Teknologi Malaysia, based on an interview with Dr. Turns in 2014.

Interest Alignment through a Funding Opportunity in Engineering Education

I was a high school student who was good at many things, I became a college student who was trying to be good at engineering, and then I became a Ph.D. student who was trying to be good at industrial engineering by studying people’s decision-making o build better decision-support tools. I ended up having a chance to be funded through a project that was supporting design education, and that project got me involved in engineering education in general. The project focused on technologies for design education, and I was interested in technologies for decision-making, so I just transferred the decision-making over to design. The particular problem I was working on, in industrial engineering, was to analyze students’ design activities and figure out what kind of problems they have using technology, and what kind of technology there is to support the problems they encountered. I was also interested in knowing that the problems were useful for learning, but due to lack of support, students were unable to think through the problems, or to understand and appreciate what they were learning from the problems. I would say my entry into engineering education was kind of the sticky issue of navigating between this paradigm of finding and fixing people’s problems and the paradigm of students having problems, and problems being a chance to learn more. So I ended up supporting their reflective activities.

Now I am working in two areas. One is giving engineering students the chance to reflect on their experiences, and the other is how research is contributing to the transformation of engineering education practices. The issue of reflection in engineering education needs to be addressed more effectively by shifting perspectives from positivist to situated, introducing design as a situated practice, and supporting students to think reflectively on their experiences of struggle. The struggle itself is a legitimate piece of the puzzle to understand the learning process, and it actually has the potential to transform itself into a profound learning opportunity.

I became a part of the engineering education community because of people who understood the potential opportunities better than me. One of the people in the community was Wendy Newstetter, and she ended up crossing paths with Cindy Atman, which is how I got my postdoc. Another was Janet Kolodner, whose research I was hired to work on originally. She was running a group called Edu-Tech, which was based on technologies to support education, but focusing mainly on design. When I was stuck on my dissertation, she was very instrumental in helping me figure out how to write it up.

As an engineering student, I was trying to figure out what problems students have, because I thought fixing the problems would make the problems go away. As an educator, I have realized that you do not let students’ problems go away; you want students to grapple with the problems worth grappling with. Scaffolding reflection—the part where students turn around and make sense of what happened to them—is foundational to education, but we do not talk about it that way a lot. We also do not talk about the students struggling in a team and making sense of themselves as team members. We assume it’s happening or hope it happens, but we do not talk about it. So it was my problem earlier, and later it became my challenge.

Several things were transformative for me, including using powerful search tools, connecting with people to discuss the ideas you like, working with people on their dissertations to amplify learning opportunities, taking classes to help students critically read research, and getting a better sense of bigger systems.

Supporting Reflection and Bringing the Periphery to the Center

One of my contributions so far has been putting peripheral issues on the table, or trying to study some of these issues like seeing educators as decision makers—not just focusing on proven educational practices—and seeing students as reflective individuals, not just people who are taking tests and doing design projects. As I get deeper into the things I have been studying, I am advocating more for these perspectives.

Another way I think I contribute is by asking people a lot of probing questions in a supportive way. While working with Ph.D. students, I always try to understand what interests them, then asking questions that make connections and directing them towards research on relevant issues. I think that is what many mentors do, and that is what I enjoy doing.

During the past ten years, I also have worked with students who were building portfolios to integrate their knowledge. I helped them make more sense of their learning experiences and grapple with issues of identity. Through one grant, I have been working with 12 campuses, looking at small- and large-scale practices that educators are using to help students be reflective and make sense of things. I try to find educators who are already using these practices, listen to what they do, and then share back with their community. Almost every part of this project excites me. It is also exciting to help educators understand better what they are already doing, instead of going around telling them they need to do something different, something new. We can celebrate the expertise of those who are already out there but were overlooked.

This work on reflection is the more public side of my scholarship, but there is another side issue that intrigues me concerning how research informs practice. It is an abstract question, but it is also very personal. Imagine me standing in front of an advisory board presenting research results, and one of the members says, “That’s all nice, but what are the implications for practice? What are we supposed to do differently?” I am very curious about questions of how to connect research to practice, because we have ideas about practices, who practitioners are, and what they do, and we have a very broad notion of what research is. But we have a very narrow idea of how research connects to practice. A group of colleagues and I have been writing journal articles on how researchers connect research to practice and the many unspoken assumptions that are related.

I have few pieces of advice, and one is that we all need to read about adult learning theory, particularly about adult development. The other is that our entire community needs to know much more about complexity theory—about phenomena that are not linearly caused but are the emergent effects of lots of little pieces interacting with each other. This is showing up a lot in discussions of managing change, research on ecosystems, and perspectives on discrimination – for example, how micro-aggressions accumulate in individuals’ experiences. Another piece of advice is to take humanities courses to get yourself exposed to a larger range of ideas. Thirdly, I would encourage everybody who is doing work in engineering education to take all the biggest philosophical ideas that have the potential to be off-putting and grapple with them as quickly as possible. After that, it is hard for the rest of the ideas to push you around anymore. You would probably have to struggle a lot, but mostly on meaningful things that help you see bigger ideas faster.