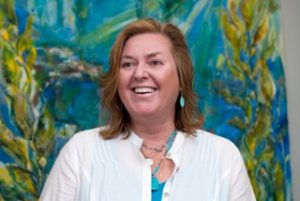 The profile below was authored by Cheryl Allendoerfer, University of Washington, based on an interview with Dr. Adams in 2014.

Finding the Right Places and People

I was working in industry, and decided to go back to school and get my master’s degree in materials science and engineering.  Before starting graduate school I spent some time helping out a friend who was running an ocean awareness day camp for 6- to 10-year-olds.  That was the first time I had ever really done anything in education.  I was really intrigued by the choices that the camp director made, and how she would anticipate what the students needed and how they would make sense of things.

When I got to graduate school at the University of Washington, I went to talk to Gretchen Kalonji, who was the co-director for the ECSEL Coalition (Engineering Coalition of Schools for Excellence in Education and Leadership).  I told her about the summer day camp, and she invited me to be part of her engineering education project.  That was the starting point.  Through ECSEL, I got to develop curriculum in materials science.  Gretchen also encouraged me to run with other ideas, so I developed summer camps, and I did assessments and evaluations.  Eventually I started taking classes in the College of Education.  I got more and more interested, and decided I wanted to do a doctorate in which my project was engineering education.  The head of the materials science program was supportive but not very optimistic about that working out, so I ended up doing my Ph.D. in the College of Education, in higher education.

Around that time, Cindy Atman came to the UW to run the Center for Engineering Learning and Teaching (CELT).  I started working with Cindy, and it was with her that I started thinking about research questions that mattered to me, which were very much about how to diversify engineering.  The more I started learning about diversity, the more I thought maybe that was the direction I wanted to go.  I was interested in finding places that were flexible enough to allow me to try to do things, so it was really nice to land in higher education and go from there.

Gretchen Kalonji first brought me in, and she gave me free rein.  She was extremely supportive, allowed me to go in directions that were working for me, and provided lots of opportunity.  Karen Paulson (at Penn State Center for Studies in higher Education) was my touch point in the community.   While I was doing my Ph.D. in the College of Education, I got a good grounding in the theoretical side of doing research, which has helped me see things from several different epistemological traditions and make connections across them.  Cindy Atman brought me into CELT and gave me entry into the research side of the community.  And Jennifer Turns has been a key support person.  But all along the way, there were also many other people doing similar things with me.

The Community: A Story of Variation

I began to feel like part of the engineering education community when I was part of the ECSEL Coalition, which included graduate students from five institutions.  They weren’t necessarily in engineering programs, but they were doing similar things.  So that was my local community, and it also gave me a network of people at other schools.  They were people that I could turn to, and they were people that I was accountable to as well.  Then when Cindy Atman came to the UW and established CELT, that became my community, especially Jennifer Turns.  I had been going to ASEE conferences before that point,  but it was when people started following up with me, wanting to talk to me about the papers I presented, that I started feeling like I was really in the engineering education community.  I got more involved in the ERM (Educational Research Methods) division, which strengthened my connection and my feeling that I was a contributor to the community.

One of the big challenges is actually how you get into the community and move around, grow, and evolve in that community, and I think it’s going to be a long-term issue.  I think some of it has to do with ideas about what it means to be in that community.  There are people who think, “You can only be a part of this if you do a JEE (Journal of Engineering Education) paper.”  So I feel like we’re in a transition place where the community is trying to be inclusive, but also trying to have some sense of what it means to do this work and do it well, and bring people into doing this type of work.  That’s really challenging.  At some level, engineering education has been going on ever since schools of engineering began, but it has been invisible work.  I think that’s part of the problem.  There are a lot of people doing this, but how do they associate and identify and come into the community?  I don’t know how open the community is to different perspectives.  I think in an effort to be rigorous, they may not be as inclusive of different ways to participate and contribute.

I don’t know if I really associate with engineering all that much anymore.  Certainly I can say, “I’m in engineering education.”  But my work crosses some boundaries, and not everyone sees it as engineering.  Especially with my work in design, the response from some people can be, “Why are you in this territory, when you’re not an engineer anymore?”  The faculty I connect with in engineering are the ones that are either pushing the boundaries of what it means to be an engineer, or they’re really interested in learning from lots of different perspectives.

My hope is that this pioneer project will tell a story of variation.  This community has a core that holds us all together, but there is enough variation that each person gets to live in his or her own space and feel a part of it.  My influences in the community allowed me to try things, and I was willing to try things.

When I think about what my contribution has been, it was the pathway.  It was inviting people into this community, working with people, mentoring them in becoming engineering educators, but not pushing a one-size-fits-all model.  A lot of what I’m doing now is helping people come into this community, helping them make connections between the things that they really care about and where it fits into engineering education, being supportive of people who are asking really tough questions and saying, “You should be asking that question.  You should be going down that pathway.”  I’m working to change things in the sense of providing the opportunity but not restricting the space.

When I came to the School of Engineering Education at Purdue, I was one of the first three from outside of Purdue.  They were developing this graduate program, and I got to help develop the Introduction to Engineering Education class.  It included all kinds of things, like best practices, how to do research, history, and so on.  It was a really great time to come here, because I got to play a really big role in what the program looks like.  I can basically point to every single one of our foundation classes and say I either made the arguments for it, laid the groundwork, and in some cases developed the class. And a lot of it had to do with pulling from my own experiences, and drawing on the challenges I’ve seen other people experience, and thinking about how to transition them into this place.  It’s one thing to provide a path; it’s another thing to have “watering holes” and community spaces along the way.

Doing engineering education research has to be something you’re really passionate about, because it’s going to require time, thought, a lot of hard work, and networking.  If you don’t care about it, you’re not going to be able to see the connections or explore the ideas that could be really transformational.  You’re just going to look at how to tick the boxes.  And we have enough of those.  The other side of the passion part is, if you’ve got some really interesting idea that nobody’s really played around with yet, explore it.  It might not work out, but until you explore it, you won’t know, and it might open another door to something that you didn’t think about.  So definitely follow your passion — this is a big commitment — and take every opportunity to learn something.  If you’re coming in with a particular mindset, your goal as a graduate student is to expand your mindset.  When you think about what it means to create knowledge and transform things, you can really only do it from that space.  You also need to find your network.  Build a community, take opportunity, find people (in your program or elsewhere) that you can have these conversations with and be that sort of critical, reflective practitioner kind of person.