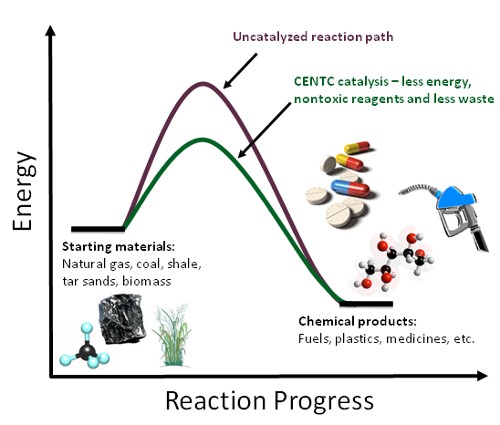 A catalyst is a chemical that speeds up a chemical reaction, but is not used up in the reaction. Because the catalyst isn’t consumed in the reaction, a single molecule of catalyst can catalyze the formation of thousands or millions of molecules of product. Catalysis is what we call the process when a catalyst speeds up a chemical reaction. Catalysis can even allow chemical reactions to occur that wouldn't be possible without the presence of a catalyst. Industrial production of nearly all fuels, plastics, medicines and the other chemicals you use daily rely on catalysis, and development of new catalysts is critical for the development of more efficient, economic and greener technologies.

Catalysis is important because:

This work was supported by NSF under the CCI Center for Enabling New Technologies Through Catalysis, CHE-1205189. Any opinions, findings, and conclusions or recommendations expressed here are those of the authors and do not necessarily reflect the views of the National Science Foundation (NSF).