Below are a some prototypes of the social robot design challenge that local high schools have designed!

Nathan Hale’s social robot is an “environment” with adaptable features built around comfort, nature and music to help reduce stress. The teens found that everyone has different needs for stress relief, so they tried to incorporate a variety of ways to customize the environment for each user based on their research. A voice user interface allows each individual to customize the experience inside. 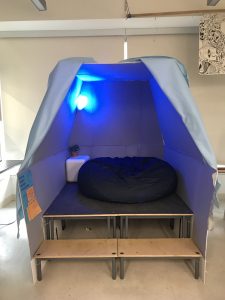 Girls in Tech Club of Roosevelt High School built a social robot named Joaquin Bartholomew III. The team followed the HCD process as a part of the design challenge. Based on research they narrowed down the specific features of their robot and decided it should: have a dome like or spherical top, speak in English & Spanish, have a British accent, be smooth and fuzzy, among other things.

The team went on to prototype based on the findings from research, they used a number of materials such as a fuzzy cloth, a stress ball, some tape, old cardboard boxes, sticky notes, old mason jars, fairy lights etc. They then tested it with their peers in school and iterated on some of the features.

The final prototype has the following features:
1. Color Changing Lights
2. Speakers: To play music and talk to user in a variety of optional accents!
3. Fuzzy outer body for HUGS!
4. Optional scents for relaxation such as lavender, homemade cookies, mint and vanilla
5. Dispenses Tea (many options for tea) 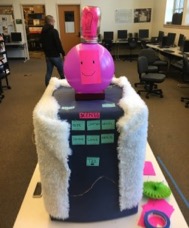 CARL, or the Comfort and Relaxation, Laugh Bot, speaks out different recordings including a calm “Morgan Freeman” quote, a “wacky youtuber” voice, and a “breathing exercise.” It rolls around on caster wheels, and plays calming acoustic guitar when not in use. The box on top holds stress relief trinkets such as fidget cubes for students to play with.

From usability testing, we learned that the funny voices might be entertaining but wouldn’t necessarily relieve stress. People suggested Morgan Freeman because he has a calming voice. Our design is unique because you can choose your stress relief: calm music, funny voices, calm voices or breathing exercises. 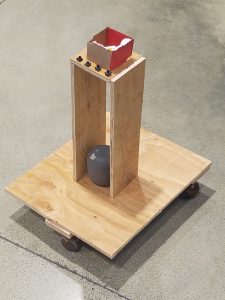 Boom Boom has a friendly personality. It makes you feel comfortable by engaging in realistic conversations. It hovers to get around. Boom Boom will provide you with treats like a beverage or candy to cheer you up.

During usability testing, we learned that participants wanted the robot to sound cartoony but also have an accent, so we are thinking of making it sound like Speedy Gonzales. Our favorite feature is that it has friendly and therapeutic conversations to help eliminate stress. 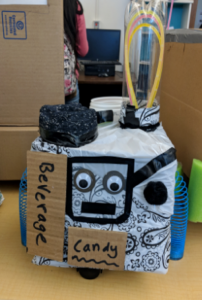 Petunia addresses teen stress by being lovable and approachable. She even helps with homework. Petunia is Friendly, Resourceful and Helpful. Making a robot by hand with my teammates helped us see the robot come to life. Centering a robot around providing academic support is a way to help students relieve stress. 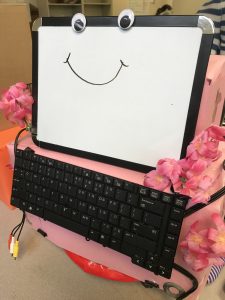 About Us
EMAR's Blog
Top