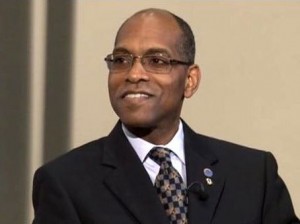 Norman Fortenberry, a longtime leader in education scholarship who has held senior positions at the National Science Foundation and National Academy of Engineering, is currently Executive Director of the American Society for Engineering Education. Throughout his career, he has played an integral role in transforming engineering education practice and research by facilitating productive collaborations among academe, industry, and government. In his endeavor to shape engineering education on a national scale, he keeps in mind the memory that gave rise to his motivation: a need to serve students.

This profile was authored by Mary McCormick, Tufts University, based on an interview with Dr. Fortenberry in 2014.

I clearly remember realizing a need for change in engineering education. It was during my first semester as a faculty member at the Florida A&M University/Florida State University (FAMU/FSU) College of Engineering, and I was teaching an Introduction to Design class.  While I had done extensive technical research during my doctoral work and was familiar with design theory, I did not have any teaching experience—not even as a teaching assistant. Further, the population of students at FAMU/FSU was not a typical undergraduate population; many of them were former service members—mostly army—from the Tallahassee area. These students were allocating much of their income to tuition, while working multiple other jobs and supporting their families. For me, that’s when teaching became real. These students were in class because this was their shot at a professional life.  They recognized that every class was a valuable opportunity for learning and a critical step in building a career, and they sought practical, hands-on learning experiences. It just seemed unfair—or less productive than it might be—to put me at the front of that classroom with little preparation. As a new faculty member, I wanted to serve these students to the best of my ability. In my mind, this was when the importance of engineering education research crystallized: Knowing technical content will only get you so far; to teach well, one must understand student learning and pedagogy.

Because I did not have teaching opportunities during my graduate work, I sought other ways to gain experience and exposure to high-quality teaching in engineering. I joined the FAMU/FSU faculty team working as part of the Southeastern University and College Coalition for Engineering Education (SUCCEED), a coalition of eight institutions in the southeastern U.S., and began working with the Dean of the College to develop educational goals and research priorities. SUCCEED was an initiative that aimed to scale up faculty use of a set of innovations in engineering courses that had been previously developed by faculty. The program had two main foci: dissemination of ideas through workshops and targeted changes in the institutional environment. It was during my time with SUCCEED that I began to learn more about what was going on in education at the national level, while suffering through what my students were suffering at the local level. This, however, only fueled my motivation for change in engineering education, and I continued to get more involved in educational activities.  It was during one particularly memorable workshop with the director of the National Science Foundation’s Division of Undergraduate Education (NSF DUE) that I remember asking a number of questions regarding the current state of engineering education during the Q&A component.  I must have impressed the director, because shortly after the meeting, I received an invitation to come work as a program officer at NSF.

Working as a program officer was my first taste of initiating and seeing change in engineering education at a larger scale.  I coordinated interdivision collaboration, implemented instrumentation and laboratory improvements, and managed an extensive array of education grants.  After several years, I left NSF to serve as Executive Director of the National Consortium for Graduate Degrees for Minorities in Engineering and Science (GEM).  The main mission of the GEM Consortium was to raise money to support students to go to graduate school and then to ensure that the students had productive internship experiences in industry.  A year later, I returned to NSF to serve as director of the Division of Undergraduate Education, which is essentially the focal point for NSF’s efforts to enhance the quality of education for future scientists, engineers, and teachers. It was at NSF that my interests in high-quality teaching progressed to an interest in engineering education research.  Within DUE, my programmatic activities were geared towards collaborating with researchers and educators to provide all students and teachers with strong foundations in science, mathematics, engineering, and technology. I believe that these early experiences in engineering education research prepared me to later serve as founding director of the Center for the Advancement of Scholarship on Engineering Education (CASEE) at the National Academy of Engineering (NAE) and as the Executive Director at the American Society for Engineering Education (ASEE).

A network of researchers to cultivate change

Each of the career positions I have held has provided unique opportunities for growth, shaping my pursuits as a director, researcher, and educator.  The common factor underlying all of these positions is the value of collaboration.  When I became a program officer at NSF, I was brought to the forefront of engineering education research and was able to collaborate with and learn from the true pioneers of the field, most of whom were NSF grantees.  Among them were Cindy Atman’s group, headquartered at the University of Washington, Richard Felder at North Carolina State, Sue Kemnitzer at NSF, and the folks from Colorado School of Mines, Utah State, University of Wisconsin, and Clemson. As a program officer and division director, I was able to support a diverse range of projects while coordinating and creating a network of researchers to cultivate change in the field.

Challenges faced by the community

The collaborative efforts have been and continue to be crucial in overcoming the challenges that are inherent in an engineering education system.  I see these challenges as separating into three main areas. The first has to do with the lack of reward structure for scholarly teaching of engineering education. Even in the most influential research institutions, faculty are expected to have exemplary teaching abilities; however, the entire rewards system is geared towards excellence in traditional technical research, not teaching.  In essence, we are trying to incentivize interest and scholarship in teaching, while the rest of the undergraduate education system is not designed to recognize or reward such endeavors.

The third challenge has to do with the rate of growth of the field.  As subgroups emerge within the field, based on specific research methods and interests such as student-assessment, instructional practices, etc., they will need to reflect the dynamics and standards of the large group.  More specifically, they will need to hold each other accountable to high standards, challenge each other, and have rigorous scholarly interactions.  For this to happen, the subgroups need to reach a critical mass of researchers who share expectations for research.

A turning point and valuable lesson

While each of these challenge areas will require hard work and persistence, we have already overcome many barriers, reached milestones, and continue to make strides every year.  One milestone that I believe was a salient turning point for the field occurred when the Research on Engineering Education Symposium (REES) got up and running. REES was actually seeded at the Frontiers in Education (FIE) and ASEE conferences in 2008; the community realized the need for establishing rigor and scholarship in education research, while broadening participation of faculty at national and international scales. A year later, the REES conferences started, and researchers suddenly had a platform for interacting and collaborating.

Each milestone teaches us a valuable lesson: You can’t stop pushing. To sustain growth, we must work together as a unit to push the field forward.  As I see it, you can either look at it positively as you make a little bit of progress, or you recognize that if you don’t keep pushing on a system, it will revert. You have to keep pushing to maintain what little progress you have.

Transformation will continue to occur as the field grows and diversifies.  For graduate students in engineering education who aspire to impact the field, my advice is to find out what interests you and pursue it. You don’t aspire to make a lasting impact; you aspire to achieve something that is personally significant. Let yourself be enthralled by a question, then search for the answers, and don’t stop pushing.  That is when disruptive transformation will occur.

Photo of Dr. Fortenberry captured from 2012 video posted by ASEE and WebsEdge.