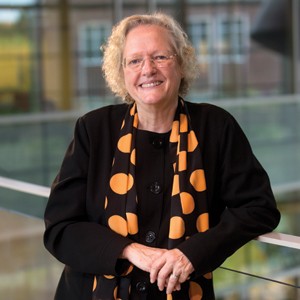 Leah H. Jamieson is the John A. Edwardson Dean of the College of Engineering at Purdue University. Trained in electrical engineering and computer science, Dr. Jamieson is an expert in speech processing, parallel processing, and computing. In the field of engineering education, she is best known for her work in creating the Engineering Projects in Community Service (EPICS) program at Purdue. Founded in 1995, EPICS was one of the first undergraduate integrated design programs at an engineering institution in the United States.

The profile below was authored by Dara R. Fisher, Harvard University, based on an interview with Dr. Jamieson in 2014.

My first involvement in what I would call “engineering education work” happened a few years after I became an assistant professor. I had been hired at Purdue as one of six faculty members hired to build a computer engineering program, and a couple of us were given responsibility for the Introduction to Computing and Programming course. Up until that point, this had been a very traditional lecture course, and as we started our work with this class, we began to think about how we could update the course to put more responsibility for learning upon the students themselves.

As we were assuming responsibility for this computing and programming course, John Lindenlaub, a senior faculty member in the College of Engineering, was becoming increasingly interested in issues of engineering education. He became involved with our project and—together with several graduate students—we designed and implemented interactive online testing for specific concepts within the course. Using this system, we were able to make a large programming class individualized for each particular student, allowing us to move away from the traditional format of introductory classes.

Before this work with John Lindenlaub, all of my educational experiences had been through traditional courses, and this collaboration challenged me to critically examine why lab or lecture courses are taught the way they are taught. For me, our work with this class really planted seeds in my mind regarding the impacts of interactive learning and interactive testing; ultimately, it was this experience working with an incredible senior faculty mentor that caused me to discover that there is such a thing as “engineering education work.”

In the early 1990s, companies were starting to express concerns regarding the state of undergraduate engineering programs, claiming that graduates had great technical skills but lacked experience in communication, teamwork, and interdisciplinary collaboration. One summer, four or five other faculty members and I decided to use the luxury of the term break to spend some time brainstorming about what we as a community could do differently to address some of these criticisms. We identified many broad skills we’d like to see in our students, such as leadership, communication, and teamwork, in addition to more specific traits such as resourcefulness and a hands-on approach to engineering work. Together, our discussions led us to conclude that these skills are not things you could learn in a one-semester course or even a one-year course; we believed that you certainly don’t wait until you’re a senior to suddenly learn how to be a good communicator.

So together we started building this idea of vertically integrated projects, where students would be on a team working on a project that was so exciting that they would be motivated to come back and work on it semester after semester. At this point in time, team-focused projects were not particularly common in engineering curricula, and the idea of engaging students in design coursework throughout their undergraduate experience was fairly revolutionary. Together, we began to build a credit and teaching structure, but then it really felt like we hit a brick wall as we struggled to find projects that were exciting enough to retain a student’s interest over multiple semesters or multiple years. We tried to collaborate with Purdue’s corporate relations team to find contacts in industry with ideas or support for potential projects, but we made very little progress. We just could not get traction with this idea.

So we walked away from this project for a while; it stayed at the back of some of our minds, but we just couldn’t find the right project to fit our idea. About two years after our initial brainstorming, we received a request for proposals from the Corporation for National Service, soliciting proposals that would engage students more deeply in their communities. And it was like a light bulb; it really was one of those rare moments that felt like a light bulb. We had found our projects.

After receiving the request for proposals from the Corporation for National Service, Ed Coyle, William Oakes, and I worked together to reach out to agencies associated with our local United Way. We explained what we thought we could offer and what we hoped our students would get out of the integrated design projects, and we asked them if they would be willing to work with us on this course. The response was extremely positive, and by the time we submitted the proposal to the Corporation for National Service, we had 18 letters of support from United Way agencies saying that they wanted to work with us. Although it was apparently very rare for the Corporation for National Service to fund engineering projects, our program, which we’d called Engineering Projects in Community Service (EPICS), ultimately received funding.

At that point it became real, and we had to put together a viable course structure, equip laboratories, and build the infrastructure that would support this type of innovative initiative. We faced so many challenges as we worked together to develop EPICS: we had to figure out how to design courses that would be open to all four years of students but graded differently depending on project or year; we had to hold multiple sections of the same course in which students would be sub-divided into projects; we had to procure materials that would then leave the university at the completion of the course; and the list goes on. We faced a lot of skepticism and overcame a lot of hurdles. By the time EPICS had established itself as a program at Purdue, we had broken so many rules that I really felt that I had learned how to push boundaries.

In retrospect, I feel that the work we did with EPICS is part of telling the story of how to expand the definition of what engineering education means. It’s not just the fundamentals of math and science or the engineering discipline-specific knowledge; it really is about collaboration and teamwork, about leadership, and about effective communication. Being an engineer is not only about solving problems, but understanding and having both the interest and the ability to look around and identify problems that need to be solved and bringing this broader toolkit to bear. At its core, engineering is about communication and commitment to the well-being of people and to the well-being of society. I think that EPICS did and does play a role in that broadening of the definition of what it means to be an engineer.

Becoming an advocate for engineering education

In my role as dean and through my work with organizations like the National Academy of Engineering, I’ve tried to serve as an ambassador for engineering education, and I continue to think about ways to broaden and change the conversation about what engineering is. I do think that I’ve played a role in this conversation, but there is still a great deal of work to be done. Issues of diversity and participation of women in engineering are especially important to me, and I’ve tried to approach these issues as an advocate both within and outside of the Purdue community. Finally, I also consider public understanding of engineering to be critical work, and I plan to continue my activism in this area moving forward as well.