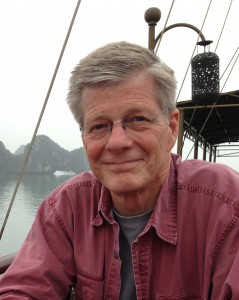 Jack Lohmann was an Industrial Engineering faculty member at the University of Michigan for ten years and at the Georgia Institute of Technology for over twenty years. He held the position of Vice Provost at Georgia Tech when he retired in 2012. He also served two years as a program director at the National Science Foundation (NSF). Dr. Lohmann helped develop many education programs during his career, including NSF’s Engineering Education Coalitions program and the International Plan at Georgia Tech. As editor of the Journal of Engineering Education, Dr. Lohmann played a critical role in transitioning the journal to a highly-regarded learning science journal in engineering.

The profile below was authored by Beth Rieken, Stanford University, based on an interview with Dr. Lohmann in 2014.

Opportunities in engineering education and research: In the classroom and beyond

My interest in engineering education goes back to my doctoral studies at Stanford University. My doctoral advisor, Bob Oakford, retired two years prior to my graduation. He continued to serve as my advisor after he retired, and I became the instructor for his courses. I already knew I wanted to be a faculty member at this point, but this particular experience gave me a better appreciation of what being a faculty member entailed. Beyond understanding the research aspect, I was responsible for a class, which deepened my interest in the education aspect of being a faculty member.

My first faculty position was at the University of Michigan as a professor in Industrial and Operations Engineering. It was at the University of Michigan where I met Charles (Chuck) Vest, one of several colleagues who had a significant impact on my engineering education pursuits. He really gave me the opportunity to start thinking seriously about education at large, beyond just my courses and my department. As Dean of Engineering, Chuck asked me to spearhead a commission on undergraduate engineering education at Michigan and to apply for National Science Foundation (NSF) funding. Although that NSF application was unsuccessful, it was successful in increasing my visibility to the NSF. A few months later, I was asked to join the NSF as a program director in the Division of Undergraduate Science, Engineering, and Mathematics Education.

During my two years at the NSF, I got to know the politics and processes involved in securing funding for education research. I was particularly impressed with Bassam Shakhashiri, who was then the Assistant Director of the Directorate for Science and Engineering. Bassam was a sharp guy and had an astute way of increasing the budget for education work. He really showed me the persistence it takes to get funding for education programs.

After I left the NSF, John White recruited me to the Georgia Institute of Technology as an Associate Dean of Engineering to focus on educational matters. I subsequently became a vice provost with a similar focus until my retirement in 2012. While at Georgia Tech—together with Howard Rollins, then Associate Vice Provost for International Education, among others—we created the International Plan, where students, including engineers, have a substantial immersion in international education and overseas activities within the framework of their existing degree program. There were two major hurdles to overcome: freeing up credit hours to insert coursework on international affairs, economics, and language; and assuring that quality academic coursework would be taken at international institutions. It took a lot of persistence to get the program launched, but many new and innovative programs require determination to get off the ground.

Starting in the early 1980s, the NSF began providing funds for science, engineering, and mathematics education. At this time, the work was geared more towards curriculum development rather than scholarly research, but it began to offer up a different way of thinking about educational matters for science, engineering, and mathematics faculty other than simply pedagogical technique. We began to do more thoughtful, intentional thinking about how students learn.

In the early 1990s, Bassam Shakhashiri and John White pooled some resources to create the NSF Engineering Education Coalition program. The program was structured such that schools of different sizes and missions would collaborate and engage in conversations about engineering education. An interesting outgrowth of the coalitions program was that it provided a platform for collaboration and funding for some engineering faculty to begin to establish themselves in educational research in the learning sciences geared towards engineering.

Once funding for engineering education scholarship was established, we needed a highly-regarded place to publish. This was the piece of the engineering education infrastructure that I decided to pursue toward the end of my career. The Journal of Engineering Education (JEE) was founded in 1910; however, it was largely an outlet for curriculum ideas and innovations for much of its life. In 1993, it was repurposed to focus on more scholarly approaches to engineering education. Following in the footsteps of Edward Ernst, editor from 1993 to 1996, and John Prados, editor from 1996 to 2001, I became the third editor of the repurposed JEE in 2001. I wanted to make JEE a place for highly-regarded, scholarly education research papers.

In the 1980s, most education work was focused on improving pedagogical technique and curriculum. I don’t think the concept of education research came out in a very visible way in the engineering community until probably the mid-1990s. Up until then, the community was progressively more thoughtful and took more scholarly approaches towards curriculum development. When Ed Ernst took over the journal in 1993, we began to see a steady progression of papers that had increasingly more scholarly depth. The engineering researchers began to set up better educational experiments based on previous work that was published in the field.

My contribution to JEE was to finalize the transition from simply reporting curriculum improvements to publishing scholarly work based on sound learning-science techniques with an impact factor equaling top-tier educational and technical research journals. In 2003, I published detailed review criteria focused on educational research, which were also refined in 2008. For two or three years after the 2003 change, JEE was a “just in time” (no backlog) journal with the flow of successful papers being just enough to publish each quarterly issue. It wasn’t until four or five years into my editorship that the flow of quality papers was sufficient that we were comfortable that the journal was going to make it in the long run. We also needed to make sure the engineering community was aware of the caliber of research published in the journal. Over a five-year period, we published three special issues, the first of which we distributed to all engineering faculty with the help of the American Society for Engineering Education’s Engineering Deans Council. The idea was to distribute a free copy to every faculty member around the country to begin changing their perceptions about the quality of work in the journal.

Transitioning JEE over to a journal with reputable scholarly depth was one of my proudest accomplishments in the engineering education field. The fact that there is now a place that faculty can publish papers and, hopefully increasingly, get credit for that during the tenure and promotion processes makes a big difference.

Over the years, I faced a lot of challenges. It all really boils down to perseverance. There was a time that if you got the outstanding teaching award as a young faculty member, that was the kiss of death for tenure. They figured you’re spending too much time on your teaching duties and not enough time on your technical research duties. That’s changed a lot over the years, and the biggest part of that is perseverance. You just have to keep at it. If you hit a road block, you either go through it, or under it, or over it, or around it, but you don’t stop—you just keep working on it.

My technique to overcome challenges was to find likeminded individuals or groups who were in positions to have the most impact in trying to make forward movement. I worked hard to get them engaged in whatever project I was working on at the time. Once you have the right people involved, you’ve got some leverage to show that there is support and enthusiasm. As you continue to increase toward a critical mass in support of your effort, you get to a point where the naysayers cannot readily dismiss you—it is going to be there and be sustainable.

Throughout my career in engineering education, I worked with my colleagues to create infrastructure to sustain the emerging engineering education community. I don’t think we necessarily did this intentionally, but we knew that we wanted to keep the momentum going towards creating a sustainable scholarly field. After the Engineering Education Coalition program ended, we began working to try to identify those parts of the infrastructure that were needed to sustain engineering faculty if this was going to be a vibrant field of scholarship. We aimed to create a cadre of conferences, journals, departments, and centers where the community of people working on engineering education would have all the things they needed to be successful at it.

The Journal of Engineering Education was my contribution towards the infrastructure of the engineering education community. Other pioneers worked on securing external sources of funding, on directing the ASEE educational conferences towards a more scholarly focus, and on expanding the community of scholars and practitioners.

In my opinion, the tipping point for engineering education as an accepted field within the engineering faculty community probably happened somewhere around the early 2000s. The transition of JEE, the creation of centers and departments focused on engineering education, the money that was being devoted to engineering education at NSF, and the sheer number of people who were now pursuing this as a substantive piece of their professional efforts was such that you could see there was no turning back.

There was a time when it was not clear to me that engineering education was ever going to succeed as a field within engineering. I believe it is here to stay and that it is only going to get better.