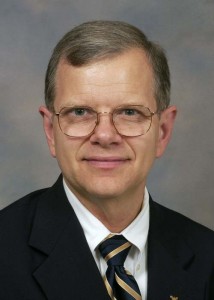 Russell Dean has been at West Virginia University since the 1970s, first as a student, then as a professor, eventually moving into the office of the provost. He had a natural intellectual curiosity around how students learn and was motivated to pursue engineering education while grading for a professor. Dean wrote 27 study guides to help students understand engineering statics and has published papers using the Myers-Briggs Type Indicator to enhance teaching engineering science courses. He has won several teaching awards, implemented curriculum changes at the university level, and helped legitimize engineering education through his involvement in the American Society for Engineering Education (ASEE).

The profile below was authored by Libby Osgood, University of Prince Edward Island and Dalhousie University, based on an interview with Dr. Dean in 2014.

Following the Family Business of Teaching

I have always been intrigued by the teaching and learning process, influenced by my mother and grandmother, who were schoolteachers. Later, while grading for my professor, Helen Plants, at West Virginia University, we engaged in conversations about educational psychology theory and theories of learning. I found this fascinating and wondered how you could manage the learning process so that students actually learned better. Through my graduate work, I learned more about the teaching process and current educational techniques, such as programmed instruction.

I was hired as an assistant professor a year and a half before I finished my Ph.D., so I was able to immediately implement what I learned and share this knowledge by publishing papers and attending educational conferences. I was honored to receive the Dow Outstanding Young Faculty Award from the American Society for Engineering Education (ASEE) in 1982, due in part to the 18-month jump start on my career before graduation.

While programmed instruction produces great learning results, it can take years to develop and requires a deep understanding of education psychology principles. When done well, it is very effective; however, it necessitates a great deal of time to carefully develop. I sought to produce study guides that would allow students to learn in conjunction with their textbook, rather than instead of their textbook, as is the case with programmed instruction. In one summer, I produced 27 study guides to supplement an engineering statics course. The study guides referred students to a standard text for theoretical development, presented general approaches to solving problems related to the topic in the particular study guide, and then walked the students through two or three detailed examples of a problem solution. I found that the study guides were as effective as the programmed instruction on the departmental exams, and took much less time to develop.

The study guides have been implemented in different universities over the last 30 years. During the development of the guides, I realized some of the jumps in logic I made were too big, and I had to go back and reword them. Since the initial development, I had to modernize the study guides, to align them with the new textbooks and move them from paper to a learning management system.

An attractive feature of the study guides for instructors is that less class time is spent in a traditional lecture. Because students spend so much of their time outside the classroom learning the material that many instructors would lecture on in class, the in-class activity is actually working with students. Instructors can spend their time in a consulting capacity in the classroom rather than lecturing.

I have found collaborating with educators in different fields and universities to be both rewarding and necessary. After meeting at a conference, I began working with Charlie Yokomoto at Indiana University-Purdue University Indianapolis on relating the Myers-Briggs Type Indicator (MBTI) to teaching and learning styles in the classroom. MBTI identifies personality types such as whether people are conceptual learners or if they learn from details. The personality type reveals which students prefer to have theory before examples rather than examples then theory. This means that teaching style can be adapted based on the personality type of students in the classroom.

Charlie and I performed a study that concluded that students with the same personality type as the instructor performed consistently throughout the course. However, students with a different personality type from the instructor initially performed worse on the first test, but then improved dramatically. The study showed that I was actually a better instructor for the people opposite to my type. It suggested that because I made them do things that they didn’t naturally want to do, they developed their problem skills along multiple dimensions. This awareness can be used to help students throughout the course.

Implementing Change at the University Level

After teaching for 10 years, I moved from being a full-time faculty member in mechanical engineering into the provost’s office, eventually becoming the Senior Associate Provost. I was chairing curriculum committees and asking questions such as, “How should you write a good syllabus?” My experience with engineering education was beginning to make changes at the university level.

I implemented a summer transition program to enhance the retention rate for students who had marginal academic backgrounds. These students had a 50% retention rate, much lower than the 80% institutional average rate. Through the transition program, we taught the students academic discipline in a very structured setting, something they had not learned in high school. Their day was programmed from about nine in the morning until about ten at night, with class, study hall, and socialization. After participating in the program, these students had a retention rate equivalent to the institutional average. You would have never predicted that based on their academic profiles.

While working as an administrator, I continued to teach a few courses, for which I received several teaching awards. Trying to understand better how people learn is really not of much value unless you’re able to apply it and actually have students learn. This accomplishment has meant more than anything to me, as it is evidence that by applying science and some engineering principles, you can actually improve teaching.

Collaborating at Conferences to Overcome Barriers

One of the challenges I experienced as an engineering educator was that, while my colleagues in mechanical and aerospace engineering were supportive, there was virtually no one else doing that kind of work. In order to find others doing similar research, I attended the ASEE annual and regional conferences, as well as the Institute of Electrical and Electronics Engineers (IEEE) Frontiers in Education conference (FIE). Through these conferences, I was influenced and hope I had some influence on the way young educators think about how to teach. Additionally, I found it helpful to collaborate with people across disciplines at the university. I partnered with an educational psychologist, who was also interested in how students learn.

A pervasive barrier in engineering institutions is the emphasis on funded research, which inherently persuades faculty to spend less time doing and thinking about their teaching. The reward structures for faculty are definitely stacked towards funded research, requiring engineering education to be more of a hobby. I received funding through the U.S. Department of Energy for a technical project, although the majority of my publications were in engineering education. When I was going for full professor, I’d finally found a niche and was publishing in the IEEE Transactions on Education, a recognized and respected journal.

While it can feel isolating being the sole researcher at an institution, I recommend staying engaged with the engineering education community. I enjoyed being active in the national meetings and found it to be a great forum for networking. Early in my career, I read Preparing Instructional Objectives by Robert Mager and discovered the process of how you design effective instruction. I recommend this book as a must read.

My career has developed based on personal motivation and curiosity. I sense more and more younger faculty now are genuinely interested in their teaching and actually spend a little more time on it. I find it encouraging, because at the end of the day, unless you really knock something out of the park on your research, our careers have far more impact on the teaching side, when you consider the number of lives you affect over time.