Class, Race/Ethnicity, and Military Service in the Recent Wars

DIALOGUE No. 6: Class, Race/Ethnicity, and Military Service in the Recent Wars

With funding from the Marguerite Casey Foundation, Washington State University Associate Professor Alair MacLean produced a report about trends in military service by race/ethnicity and class that sought to determine whether the men who served during the recent wars came disproportionately from minority and low-income families. In brief, Dr. MacLean found no evidence that the poor or minorities had been enlisting disproportionately during the recent wars. However, she did find evidence that individuals from families at the top of the income distribution were less likely than their peers to enlist in the years immediately following high school, suggesting a de facto “wealth exemption.”

There were no statistically significant differences in enlistment between blacks, whites, and Hispanics in either 2006 or 2012. Individuals whose race/ethnicity was categorized as “other” were significantly less likely than whites to have enlisted in these years.

Consistent with the idea of a middle class draft, people were relatively less likely to have enlisted if their parents had low levels of education or higher levels. People from the second SES quartile or, lower middle class, were also most likely to enlist, followed by individuals from the third quartile.  In terms of income, people were least likely to enlist if they grew up in families at the top of the income distribution, though this difference is only statistically significant for 2006, two years after the respondents were high school seniors. Individuals were most likely to enlist from the middle two income quartiles.

Rather than a “poverty draft,” these analyses instead suggest that the armed forces depended on the middle class during the recent wars. In addition, there may have been an informal “wealth exemption,” in which the affluent were less likely to enlist than everyone else (at least in the two years immediately after high school). Furthermore, at least during these wars, minorities were not disproportionately likely to enlist.

While advocates and journalists have tended to combine the poor and minorities when voicing concerns about potential inequities in service, researchers have tended to examine these factors separately. The available evidence suggests that people may enlist according to different, potentially overlapping patterns with respect to poverty and race/ethnicity, and future research should attempt to explore those patterns.

The full DIALOGUE report includes more detailed findings, and a summary of the discussion with the practitioners and policymakers.  Download DIALOGUE 6 [pdf].

* Participants' affiliations at the time of the call. 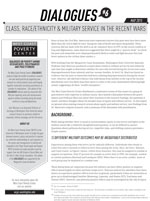