Food Insecurity and State-Nonprofit Collaboration on the West Coast

Food insecurity is an urgent and growing issue. In November 2009, the latest month for which data are available, over 38 million individuals were receiving food stamps, up 23 percent from November 2008. But low income families who need help with food, shelter, health care, or other needs face class a complex web of public and private providers and eligibility rules. Providers who wish to serve these families effectively often find that they must collaborate in order to do so. With support from the WCPC, sociologist Mark Edwards has recently explored how policy changes brought about by welfare reform have changed the relationships between public social service agencies and nonprofit groups working on food insecurity on the west coast. In our first DIALOGUES project, Edwards and a group of policy practitioners review and discuss his findings.

In 2006, 11% of families in the U.S. reported food insecurity, and roughly 9% of the population received food stamp benefits. While the west coast states had similar rates of food insecurity, rates of food stamp use and food stamp take-up among eligible families varied widely. For example, the food stamp take-up rate ranged from 50% in California to 85% in Oregon. This variation in the use of public food support programs suggests that there may be differences in how effectively states provide such benefits, and might reflect differences in how non-state actors work with the state to connect families with benefits.

Based on interviews with state and nonprofit actors in the the west coast states, Edwards found that the amount of collaboration between state and nonprofit entities had increased in the years since the 1996 overhaul of the federal welfare program. In addition, the types of collaboration had also increased during this period, in part as a result of the uncertainty and flexibility ushered in by welfare reform.

In response to the study, policymakers and practitioners endorsed Edwards' findings about increasing collaboration, citing numerous examples within their respective states. These partnerships were seen as the result of efforts on the part of both sides to work together. At the same time, practitioners noted some limits on the extent to which they might work with the state. For example, one practitioner noted that there could be some tension between working too closely with the state and acting as an advocate for the food insecure.

How many families are currently food insecure?

Roughly 15% of all U.S. households reported food insecurity at some point in 2008, up from 11% in 2007. That  percentage translates into 17 million households with 49 million Americans, including 17 million children. 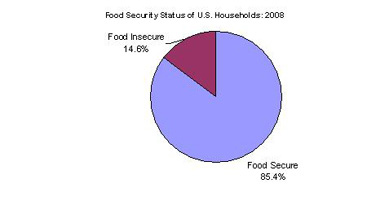 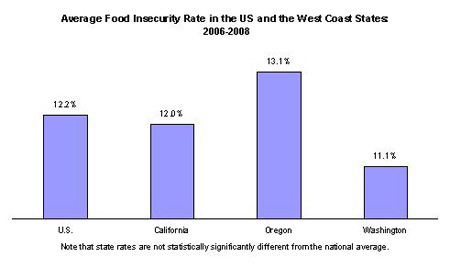 Who is Food Insecure? 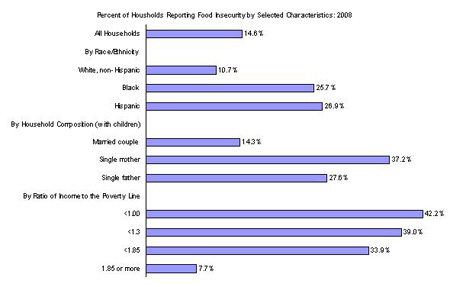 Lower-income American families can access various forms of federal food assistance, including food stamp/SNAP benefits, free or reduced-price programs, and Women, Infants and Children (WIC) benefits.  Among households that reported food insecurity in 2008, roughly one-third reported participating in the SNAP program, one-third reported participating in the national school lunch programs, and 14% reported receiving WIC.  In addition to federal supports, families may have access to community supports such as food banks and emergency kitchens. The chart below shows dual use of federal and community supports by households with incomes below 185% of the poverty line. As shown below, in 2008, among families who received SNAP benefits, 28% reported also using a food pantry and 4% reported using an emergency kitchen. Among these lower-income families who did not use SNAP, WIC, or free/reduced price lunch programs, a much lower percentage reported accessing community assistance: 7% reported using a food pantry and 1% reported using an emergency kitchen. 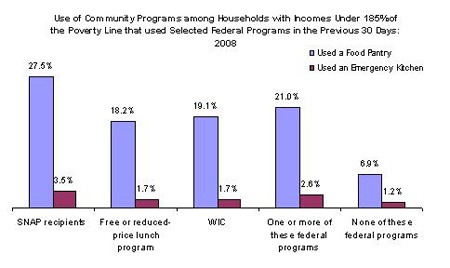 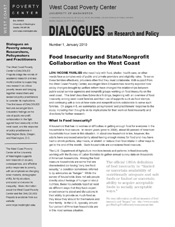