Earth and Space Sciences and Astrobiology grad student Josh Krissansen-Totton’s research rotation took him to the “dreaming spires” of Oxford to learn how astronomers might search for life on distant exoplanets.

In the fall of 2017 I traveled to the University of Oxford in the UK to complete my astrobiology research rotation. My rotation project was motivated by an interest in what atmospheric gases other than oxygen might reveal the presence of life on exoplanets, and how we might detect these.  On the early Earth, both methane (CH4) and carbon dioxide (CO2) were abundant in the atmosphere, and for my thesis work I demonstrated that these two gases should not persist without continuous supply of methane from the surface. Furthermore, I showed that is difficult to produce large fluxes of CH4 into such an atmosphere without life, and so the simultaneous detection of CH4 and CO2 in an exoplanet atmosphere would be a potential biosignature (Krissansen-Totton et al. 2018).

The logical next step in this work was to ask whether this combination of gases could be detectable with future telescopes such as the James Webb Space Telescope (JWST). Simulating astronomical observations of exoplanets is outside my skill set as an Earth and planetary scientist, and so it seemed like a perfect project for an astrobiology rotation! I traveled to Oxford to work with Professor Patrick Irwin in the Department of Physics.

Professor Irwin’s group uses their in-house radiative transfer code NEMESIS, which simulates the physics of radiation passing through planetary atmospheres. The code can be used to simulate exoplanet transits, whereby an exoplanet crosses in front of its host star and some of the stellar light received at Earth passes through the exoplanet’s atmosphere. Because different gases absorb light at different wavelengths, the size of the planet (i.e. the transit depth) appears to vary with wavelength. Thus, the transit spectrum of an exoplanet can be used to detect and quantify the gases present in an exoplanet’s atmosphere.

Fortunately, the wavelength range of JWST is ideally suited to detecting atmospheric gases such as CO2, CH4, and carbon monoxide (CO) (Fig. 1, top right). The detection of CO is important because many of the nonbiological scenarios that produce CH4 would also be expected to produce CO, and so it will be important to check for CO to rule out these cases.

Finally, given noisy JWST observations, I wanted to know how well atmospheric constituents could be constrained from these observations. I used the ‘Nested Sampling’ retrieval algorithm to calculate probability distributions for planet properties from the noisy spectra. The whole procedure is shown in Fig. 1. The probability I obtained for properties like CH4 and CO2 concentrations show how well these gases can be constrained by JWST observations. 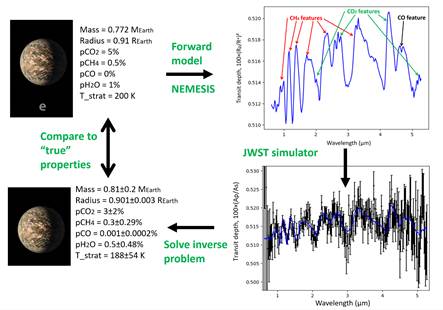 Fig. 1: Simulating JWST observations and solving the inverse problem. This figure outlines the procedure used in my research rotation. First, I defined a planet with a CO2+CH4 rich atmosphere similar to that of the early Earth (top left). Next, I used NEMESIS radiative transfer code to calculate the transmission spectrum of that planet (top right). I then used a JWST simulator to calculate what the noisy, observed spectrum would look like (bottom right). Finally, I used a retrieval algorithm to calculate planet properties based on the noisy JWST spectrum (bottom left). These derived properties (with uncertainties) could be compared with the true properties of the invented planet.

Preliminary results are promising. I found that after observing ~10 transits of TRAPPIST-1e with JWST, it ought to be possible to detect CH4, CO2, and perhaps put some tentative upper bounds on CO. I also did calculations simulating observations of a modern Earth-like atmosphere and found that oxygen/ozone is much harder to detect than CH4 and CO2 in the early Earth scenario. This means that not only is the CH4/CO2 biosignature combination probably more common than oxygen biosignatures (Krissansen-Totton et al. 2018), but it is also easier to detect with JWST. I found that Earth-like clouds shouldn’t interfere with observations significantly, although stellar heterogeneity and variability will be a major challenge. I am currently working on writing up these results for a paper.

In addition to my research project, doing my rotation in the UK provided many opportunities for travel and professional networking. I presented my work at a seminar at the University of Exeter (Fig. 2), a Planets workshop held in Oxford, and traveled to the Azores for a geoscience conference.

I am thankful to Professor Irwin and his research group (pictured in Fig. 3) for welcoming me into their group and spending a lot of time helping me set up the NEMESIS code. The Atmospheric, Oceanic, and Planetary physics group at Oxford was a very pleasant and friendly environment to work!   I had a wonderful time living and working in Oxford University for a few months. Thanks to Professor Irwin and his group, and funding provided by the UW Astrobiology Program I was able to expand my research into astronomy, make valuable professional connections and collaborations, and experience living in the wonderful city of Oxford. 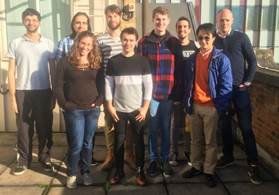 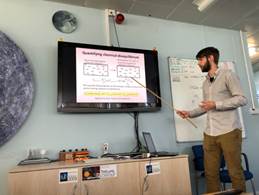 Left – Fig. 2: Presenting a seminar at the University of Exeter.