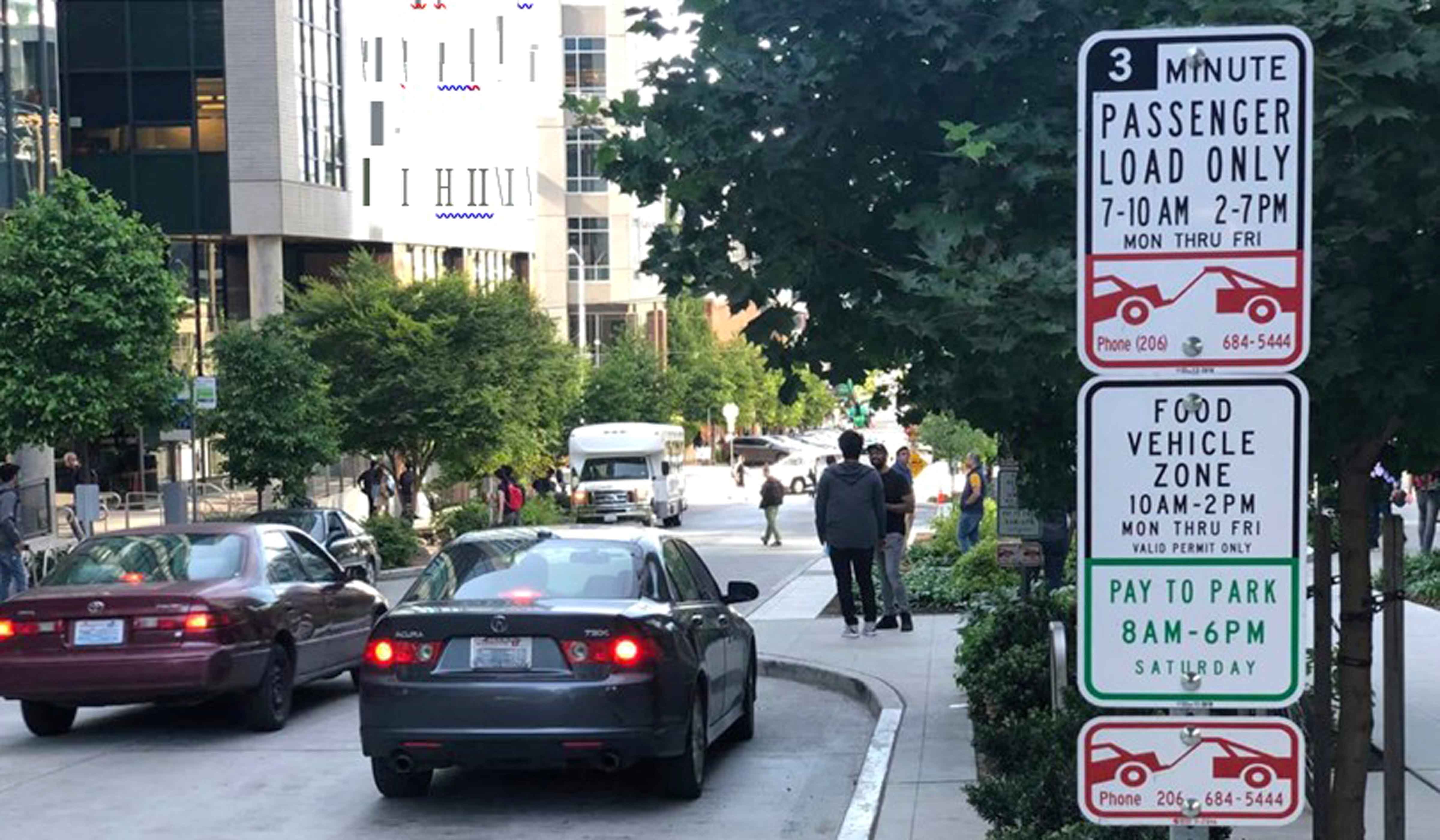 Like many congested cities, Seattle has experienced a rapid increase in ride-hailing trips by transportation network companies (TNCs) such as Uber and Lyft. That increase has raised broad concerns about congestion, safety, and effective curb use. In response, this study looked at a strategy to manage TNC driver stops and improve traffic flow when passengers are picked up and dropped off in the South Lake Union area of Seattle.

Nationally, the share of Americans who use ride-hailing services has more than doubled since 2015, from 15 percent to 36 percent. In some areas of Seattle, TNC ridership has grown by more than five times its level in 2015. On-line retailer Amazon, whose main campus in South Lake Union has over 8,500 employees, was specifically concerned about the scarcity of curb space where TNC drivers could legally and readily stop.

To mitigate the impacts of passenger pick-up/drop-off activity on traffic, the city proposed a strategy of increasing passenger loading zone (PLZ) spaces in South Lake Union, while Uber and Lyft would implement a geofence to direct their drivers and passengers to designated load and unload locations. The rationale was that by providing ample designated pick-up and drop-off space along the curb, TNC drivers would reduce the frequency with which they stopped in the travel lane, as well as they time they remained stopped.

For this study, researchers at the University of Washington’s Urban Freight Lab and Sustainable Transportation Lab analyzed an array of data on streets and curb activity along three block-faces on Boren Ave N in December 2018 and January 2019. The research team collected data during the morning and afternoon peak travel times by using video and sensor technology, as well as in-person observations. They also surveyed TNC passengers.  They collected data in three stages: a study baseline before PLZs had been added; after the new PLZs were added, expanding total PLZ curb length from 20 feet to 274 feet; and after geofencing was added.

The study found that passenger loading and unloading made up a significant share of total vehicle activity in the study area. Without dedicated load/unload curb space, TNC vehicles stopped and waited at paid parking spots and in other unauthorized curb spots.  A significant percentage of vehicles also stopped in the travel lane, potentially blocking or slowing traffic.

Adding PLZs and geofencing was found to increase driver compliance in stopping at the curb versus stopping in the travel lane to load/unload passengers. Adding PLZs and geofencing also reduced the average amount of time drivers stopped to load/unload passengers. While curb occupancy increased after PLZs were added, occupancy results showed that the allocation of PLZ spaces was more than necessary to meet observed demand, as average PLZ occupancy remained under 20 percent after expansion, even during commute hours. In addition, adding PLZs and geofencing did not have a significant impact on traffic safety, and it did not produce a significant impact on roadway travel speed.

Although the study showed the approach to be successful in meeting its goals of increasing driver compliance and improving traffic flow, the authors noted that the strategy is not a silver bullet for solving traffic congestion. Any initiative to manage use of curbs and roads (by TNCs or others) must be part of a city’s broader transportation policy framework and goals.