In later October 2018, 12 graduate students and 4 senior staff members of the UW Astrobiology participated in a three-day UWAB workshop in Death Valley, CA. The purpose of the trip was to study the geologic record of Neoproterozoic to Cambrian environmental transition, observe geological structures related to tectonic activity in the area, and obtain DNA samples from various locations within the national park for subsequent processing at UW with the new Nanopore sequencer. These field experiences familiarized students with the co-evolution of life and surface environments on the early Earth, offered a perspective on what observations of geologic structures on the surface of a planet can tell us about its activity and potential for life, and provided a hands-on example of life in extreme environments.

The UW Astrobiology group was accommodated at the Shoshone Educational And Research Center (SHEAR) in Shoshone, CA. SHEAR has served for decades as a community shelter to students conducting geologic mapping and investigations in the Death Valley region; our stay at the by now legendary residence was facilitated by the trip co-leader, Prof. Darrel Cowan, structural geologist and an expert on Death Valley of the UW ESS Department. On our first night we were generously hosted for Mexican dinner at the local Crowbar & Saloon, our subsequent evenings were spent with discussions and games in the SHEAR hub.

Figure 1: Our drive from Las Vegas to Shoshone rendered some spectacular views of the range-and-valley landscape with well-exposed, colorful stratigraphic layers, leaving the geologists among us in state of exhilaration and awe.

Figure 2: Based on close observations of modern analogues close to Dumont Dunes, students discussed the role of mud cracks and desiccation features in inferring the geologic history of Mars.

Figure 3: Prof. At the Kingstone Peak 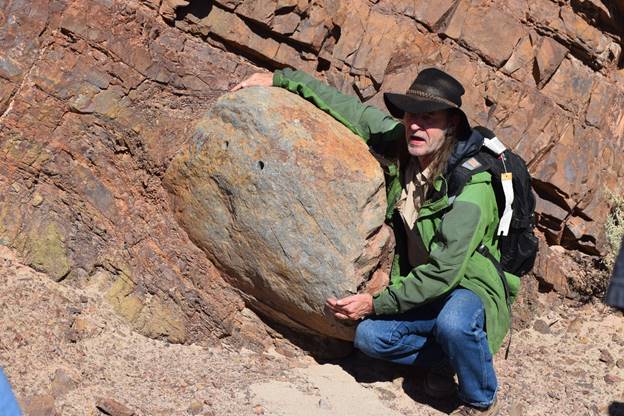 Formation, Roger Buick told the story of the Sturtian glaciation more than 700 million years ago, when the Earth is thought to have been entirely covered by ice and transformed into a ‘snowball Earth’. However, as Roger demonstrated using this giant dropstone that was presumably carried by an iceberg over long distances before being deposited into its current host sediments, glaciers at this time and location appear to have been melting and calving to produce such icebergs, pointing more in favor of an incompletely frozen ‘slush-ball Earth’. Our other observations of glacial deposits at the characteristically purple Kingston Peak Formation included graded bedding and glacial diamictites.

Figure 4: We learned about the biota of the Proterozoic Eon while studying the stromatolites of the 1.2 billion years old Crystal Spring Formation.

Figure 5: Jana Posing with the exceptionally well-exposed normal fault at the Frontal Fault Canyon. Crustal spreading in the region triggers recurrent seismic activity and faulting of the rocky mountain ranges. 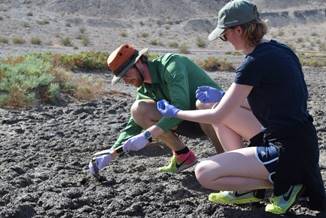 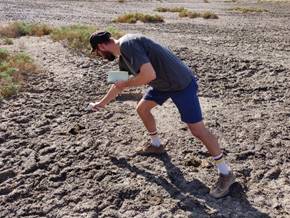 Figure 8: Where else to have a discussion about life in space than in one of the most extreme environments on Earth?

Figure 10: At Devil’s Golf Course, salt had crystallized into mysterious structures. Prof. Roger Buick attempted to answer our questions about their origin.

Figure 11: The path to our next sampling location, the Salt Creek, was laminated by the succulent pickle leaf and surrounded by otherworldly sedimentary lake deposits.

Figure 12: The view of Badwater basin from Dante’s view.

Figure 13: Sunset over Death Valley as observed from Dante’s View.

Figure 14: On our way back to Las Vegas, we investigated ancient animal burrows in the Cambrian Zabriskie quartzite. These trace fossils are indicative of the new age of bioturbation and sediment ventilation after the Cambrian explosion 541 million years ago. Adjacent to the Zabriskie Quartzite outcrops the fossiliferous Wood Canyon shale, where we searched for Ediacaran to Cambrian trilobite fossils and learned about trilobite morphology.

Overall, the Death Valley workshop was perceived by its participants as a great success! The field observations and accompanying debates satisfied our scientific curiosity, and the group travel and time spent at SHEAR facilitated further bonding of our great community of students and researchers. By the end of the trip, we could not stop talking about the next AB workshop!

Can extremely phosphate-rich salt lakes on the Car

Thanks for joining us in September for our fifth U