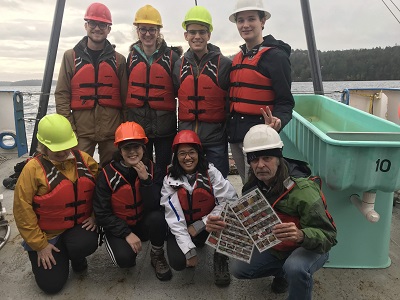 Among the grey autumn seas of the San Juan Islands and the stunningly green campus of UW’s Friday Harbor Labs, Astrobiology held its annual workshop. The ferry bound for Friday Harbor carried our group of Astrobiologists as the R/V Rachel Carson docked in the harbor after a week of exploring the ocean’s capacity for memory with a team of artists and scientists.

Aboard the Rachel Carson, Astrobiologists and the Ocean Memory group led by Roger Buick and Jody Deming set out on three trips to trawl the San Juan Channel for bottom-dwelling invertebrates. Invertebrate groups representing the morphological diversity that evolved during the Cambrian Explosion were hauled up from the depths and brought to the labs. Within the morphology of these animals exists a history of our evolution and the early, emerging complexity of the body and mind.

The lab water tables were soon inhabited by a diversity of invertebrate body plans: the radially symmetric and the bilateral; the soft and the jointed; the multilimbed and the limbless; grazers, hunters, and passive filter feeders. Such body plans were among those that lived long enough to reproduce during the early evolution of animals and tell the tale of their survival in their unique morphology.

Joined by the Ocean Memory group, our evening discussions stretched our understanding of life and intelligence. How is memory of the past stored in the physical and biological world of the present? What can we hypothesize about other forms of intelligence in the universe by understanding the diversity of the nervous system and behavior of animals on Earth? Only by daring to ask such questions will we one day be able to speculate an answer for them.

Can extremely phosphate-rich salt lakes on the Car

Thanks for joining us in September for our fifth U