As published in Dimensions Magazine - Fall 2019

Families caring for persons with dementia need all the support they can get, but their options are often limited to conventional care homes or even locked facilities. For the person with dementia, this arrangement restricts their ability to engage with the community. The idea of being truly independent and living with dignity after diagnosis is quickly gaining attention, with innovations emerging around the world.

One such novel concept – “the dementia village” – began operating in the Netherlands in 2009. De Hogeweyk was a first-of-its-kind independent housing village for people living with dementia, in a safe town-like environment complete with shops, cafes and hair salons. Its success has led to other such communities and care centers based on the concept of independent/codependent living.

The dementia village serves as a community for people, rather than a facility for patients.  In order to get a clearer picture of how this influential model works in practice, I spoke to Donna Phillips, a graduate of University of Southern California Aging Services Management, who is interested in dementia-friendly communities and visited De Hogeweyk several times between 2015 and 2017. She explained that about 150 residents in De Hogeweyk are grouped in households of six people, with two assistants who do not live there. These households function like a family home. All members of the house sit together to plan the budget and meals. Residents can visit the various parts of the village independently – whether shopping at the grocery store or getting a haircut. 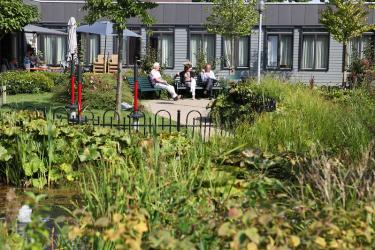 The design of the dementia village includes streets, gardens, shops, cafes, and residences with elements of different cultures, lifestyles, and social classes to help residents feel connected to the space and also reminisce about their past. The outside grounds are built with courtyards that are strikingly different from one another. Some feature a chess pattern, fountains, or other contrasting architectural elements that serve as visual cues to aid the residents’ sense of location. The villagers can wander the grounds and courtyards unaccompanied. According to the De Hogeweyk designers, the intention is to enhance wellbeing and allow residents to remain active in everyday life, in ways that mirror their lifelong hobbies and preferences.

In such a system, one might think staffing could be a challenge, but Phillips tells me the staffing is lean. There is a clerk working in the grocery store, maintenance and gardening personnel, a cashier for the cafe, reception desk staff, assistants for the houses, and volunteers. A medical office and nurses are available for medical emergencies. At nights, residents sleep in their house on their own. There are no cameras anywhere because of stringent European privacy laws. The reception desk staff stay at the village through the night and are alerted by a sound system to any anxiety and movement. This level of staffing has worked well. Residents are occupied through the day with various activities and vigorous walking to encourage better sleep. Their overall physical fitness is many times better than in conventional settings. The residents are also taken outside the village, to visit markets or enjoy other activities such as horse riding. These scenes are almost unimaginable in traditional care centers.

In order to become a resident at De Hogeweyk, a person must require round the clock care. Priority is given to people who have struggled to find housing in other facilities due to frequent wandering or high agitation. The cost of care is about $6,000 a month. 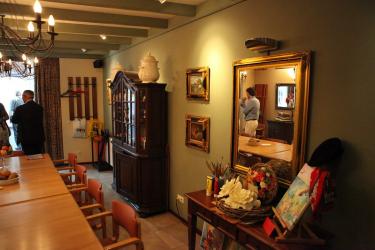 I wondered how an unlocked facility worked effectively in managing care of people with severe symptoms. Phillips reiterated that the approach to care here is allowing people to act by instinct. Residents can explore the area as much as they would like, which reduces agitation and avoids confrontational situations. If a dangerous situation ever evolves, the staff are trained to exude warmth and calm rather than concern or shock. Psychotropic drugs are not used for treatment.

Some of the other dementia villages designed on the principles of De Hogeweyk are Bangalore, India’s NKISA and Rome, Italy’s Villagio Emanuele. “The Village” in Langley, British Columbia recently opened its doors in Summer 2019 and a village being constructed in Bern, Switzerland may open later this year.

While dementia villages are a welcome effort to minimize the care family’s load and provide a level of freedom and independence to the person with dementia, they are not without downsides. States Phillips, “the dementia village is an example of the most important ways to provide care: maximize autonomy and minimize negative behavior. However, creating a segregated community for dementia affected can feel like a separation from community. We need an inclusive approach.”

For De Hogeweyk to work, some medical and legal rules and regulations had to be adjusted. This makes it a lot harder to replicate in other locations. Phillips thinks that a more inclusive village with space for family, students, and others would create a peaceful, welcoming environment and enforce the idea that people with dementia should belong and thrive in the community at large, rather than being kept separate.

Other communities and day care centers have taken inspiration from De Hogeweyk but follow different care strategies. Glenner Town Square in California, which opened its doors in 2018, is a day care center for people living with dementia which recreates the surroundings to reflect common scenarios of the 1950s and 60s. Started by Dr. George Glenner, a physician and researcher at UCSD, Glenner Town Square is designed to be adaptive and set to update every ten years.

The concept of reminiscence therapy is used to stimulate the memories of people with dementia, with events from their teens to 30s. Long term memories which are more preserved might be rekindled by a sight, sense, or smell from the past. The stores, libraries, diners, salons, and even music played inside the facility are designed to resemble the period. The familiarity of surroundings seems to calm people and offers symptomatic benefits such as decreased agitation and confusion. Glenner has structured activities throughout the day, but people can choose whether to participate. The cost of care here is about $500 a week for 8 hours of care per day. Family and caregivers report it is worth the cost, given that their loved ones come back home in a happier mood and calmer state.

Another such care center in Haarlem, North East Netherlands offers simulation as a way of reminiscence therapy. There are simulated bus rides, beach outings, and relaxation rooms that residents can use independently in the center. The settings are made to resemble natural scenarios with water wave sounds, ice cream vendors, heating fans, and sand in the beach rooms, and relaxation rooms with realistic wall paintings of scenic pictures. This setup is akin to a children’s museum where there is pretend play with different themes. 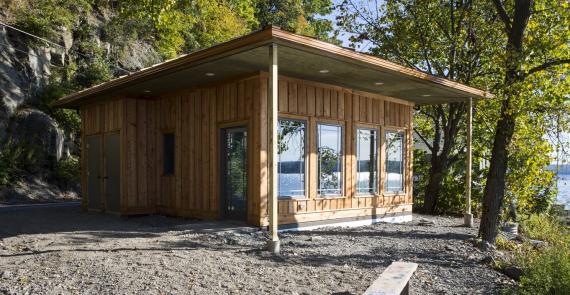 In my search for newer avenues of care for the elderly, I spoke to Kavan Peterson, Chief Operating Officer for Minka homes and communities, a key player in the Momentia Seattle movement and supporter of UW Memory and Brain Wellness Peterson highlights the feasibility of Minka homes – they are prefabricated in a robotic factory by 3D printing and delivered as cargo. The cost of a studio layout is about $100,000, plus the shipping, finalization, and finishing costs after set up at the location. The company states that the scaled down residences can offer the opportunity to remain in a familiar home and embrace aging with a focus on changing abilities rather than disabilities.

From dementia villages to new smart home design, these diverse approaches all seek to maximize independence and recognize inherent human dignity amid changing abilities. These efforts drive home the idea that guides Seattle’s dementia-friendly movement and is influencing cities around the country: aging should be thought of as a period of continued growth, new connections, and renewed hope rather than a period of decline. -Deepa Subramaniyan