“The Dark Energy of the Brain,” with Dr. Marcus Raichle 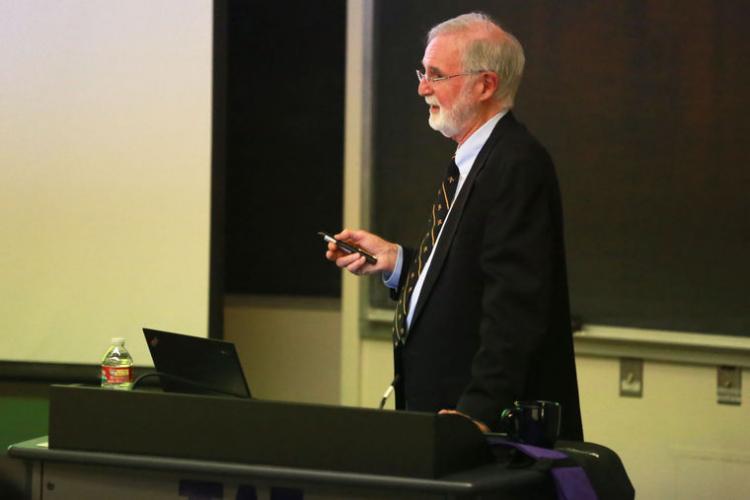 In the 1990's, neuroscientist Dr. Marcus Raichle (UW, BS '60, MD '64) at Washington University in St. Louis, Wisconsin, began to add brain scans into a folder labeled 'Medial Mystery Parietal Area.' This referred to a bunch of different brain areas that seemed to show organized activity when study subjects laid quietly in the scanner, just letting their minds wander, and then a decrease from that baseline activity when they concentrated on a task.

A remarkable observation at the time, this finding challenged the assumption in neuroscience that the resting brain simply generated "noise" and only leapt into action in response to an external event, such as a knock at the door. As Raichle and his lab eventually demonstrated, this idea couldn't be farther from the truth.

Raichle, one of the leading authorities on brain metabolism, uses sophisticated technology called functional magnetic resonance brain imaging (fMRI) to track the patterns of activity naturally present in living brains. We now know that the brain—at rest or awake—organizes itself into intrinsic networks, which are groups of brain areas that synchronize their activity, ramping up and down at the same time. These 'functionally connected' networks appear even under general anesthesia and during light sleep, suggesting that they are a fundamental facet of brain functioning.

During his recent talk at the UW Department of Neuroscience, Raichle shared his intuition about the brain: “The brain is similar to an orchestra. It has sections like the strings or percussion. But one cannot just look at it in that way,” Raichle said. “An orchestra is much more than its sections, they all need to come together to produce music.”

Now, the task is to figure out the identity of the orchestra's conductor. What system keeps time for the collection of musical instruments and tells them when to switch rhythms? Raichle needs to better understand the brain signals that coordinate access to the vast storehouse of memories and knowedge, at exactly the correct moment, needed for survival in a complex, ever-changing world.

To do so, Raichle's team uses advanced analysis methods to pick out signs of communication among different networks. They are finding that brain network interaction may be akin to telephone conversations, a question or prompt on one end leading to a response at another.

"Still, we are seeing just the tip of the iceburg," he said. "We are long distances from understanding how the brain's instrinsic functional connectivity networks might point to interventions for autism, schizophrenia, or neurodegenerative diseases, for example." Indeed, the brains of people with high-functioning autism don't seem to show abnormal network activity in Raichle's studies, at least at the level of analysis currently available.

Raichle's calculations have informed studies of Alzheimer disease, showing that the brain regions in the default network often are among the first areas affected by the pathology. The ability to track these changes with fMRI may aid in early diagnosis. Along those lines, researchers at the UW's Integrated Brain Imaging Center (IBIC) are investigating whether measures of individuals' brain network connectivity can predict Alzheimer disease-related symptom progression or improvement, and they'll be sure to keep Raichle in the loop.

The brain is similar to an orchestra. It has sections like the strings or percussion. But one cannot just look at it in that way. An orchestra is much more than its sections, they all need to come together to produce music.