What’s the Best Diet for the Aging Brain? Dr. Angela Hanson, geriatrician at the UW Memory and Brain Wellness Center, studies how diet can affect cognition and Alzheimer disease progression. She recently received her first NIH Career Development Award to take her work farther. We sat down to talk, over vanilla lattés and pastry, about research at the confluence of lifestyle, genetics, and aging.

What’s the best evidence-based information about the best diet for the aging brain?

In terms of brain and cognitive health, the best data right now support the Mediterranean diet, which includes relatively little red meat and emphasizes whole grains, fruits and vegetables, fish and shellfish, and nuts, olive oil and other healthy fats.

But, when you look at some of the healthiest populations in the world, there’s a lot of variation in the types of foods eaten. For example, Japan and Okinawa Island have lower rates of heart disease and dementia, and their diet is high in carbohydrates. In contrast, the diets in the Mediterranean region have fewer carbohydrates and more fat, tending to be unsaturated fat. Is that because there is more than one 'right' meal, or does it depend on someone's genetic background? We are trying to figure that out.

How did you get interested in the connection between diet and Alzheimer disease?

I first became interested when I joined Suzanne Craft's lab at the UW as a research fellow in July 2011. Dr. Craft, now the Research Director for the Center on Aging at Wake Forest University, North Carolina, is a neuropsychologist who conducts pioneering research into the role that insulin plays in the brain. At the time, she had just completed a meal experiment in older adults: they were fed either a "Western diet" or a "low fat heart healthy" diet for 4 weeks, then underwent several tests including metabolic and Alzheimer disease biomarkers in the blood and spinal fluid, as well as cognitive testing. She found that people with the most common genetic risk factor for late-onset Alzheimer disease, the APOE4 allele, responded quite a bit differently to intranasal doses of insulin. In fact, the insulin seemed to be moving their biomarkers in the opposite direction, compared to those without. 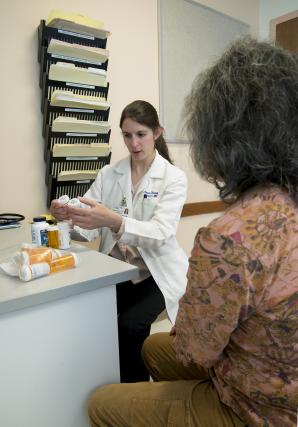 I helped on Dr. Craft’s study, and when I went back and analyzed some of her data, I found that the presence of APOE4 seemed to modulate the metabolic response to insulin, which is a dietary factor. Individuals with APOE4 seem to have a completely different mechanism of metabolizing insulin. The idea that there may be unique aspects to diet and cognitive aging that depend on genotype really struck me, and I wanted to understand more.

For some background, we know that APOE4 confers a 2-fold to 10-fold increased risk of late onset Alzheimer disease in most populations. It’s interesting that it’s not a guarantee—there are people with two copies who live to 100 and on autopsy their brains show no disease, and there are people without APOE4 and develop Alzheimer-type dementia anyway.  So, it may be that if you have the APOE4 genotype, you are more prone to certain vascular risk factors, so that certain foods or activities accelerate aging, and if you don’t do those things, maybe not. It suggests there is some environmental and genetic interaction, something that you could modify or prevent if you knew what it was.

What’s your current approach to finding that link between diet and Alzheimer disease risk?

First, it’s important to understand the ways to approach studying the best diet for the aging brain. One is the epidemiological approach, in which people report what they ate throughout their life and researchers look for rates of dementia in the population, but it’s difficult to sort out the influence of other healthy behaviors. In intervention studies, people eat a certain food for several years, but that’s difficult and expensive. I use acute meal studies, which only focus on the immediate effects of one meal on metabolism and cognition.

Acute meal studies don’t tell you about the chronic impact of diet, but they can give insight into mechanisms. My studies are designed to tell us what’s happening when you eat something: What’s getting into the brain, what is it doing there, if that differs for people with APOE4 and can we use that type of information to go back and design a larger study with a longer intervention to answer the question of whether there are better diets for different people.

Tell us about the findings of your new study in the Journal of Alzheimer’s, and what these findings mean?

It’s a new area of research. In the new study, we found that adults with E4 performed better on memory tests after eating a high fat meal, compared to a high carbohydrate meal. This suggests that people with the APOE4 genotype have a different ability to transport lipids into the brain vs. carbohydrates, and that may be an important to know in terms of figuring out what sets the risk of Alzheimer disease.

For the research funded by my K award, I’ll replicate this finding in a larger population and understand the findings on a deeper level. This study won’t tell me if I’ve found the best diet to prevent Alzheimer disease, but it will tell me if certain measures of metabolism and amyloid production change in response to a high-fat vs. a low-fat meal, and whether that depends on APOE genotype. If I do find a relationship between metabolic response and amyloid regulation, I could say, well, this could be a mechanism through which diet may modify disease risk.

What will it take to find the best diet to prevent Alzheimer disease or reduce one’s risk?

Getting that answer will take a better understanding of biomarkers in Alzheimer disease. We do have pretty good ways of diagnosing the condition with the biomarkers we do have, including imaging, cognitive tests, and spinal fluid markers. The thing is, we don’t know much about how those markers might change in the context of an intervention. For a lot of infectious or inflammatory diseases, there’s a marker we can point to and say that went down, and that means the disease is getting better—but we don’t have that for Alzheimer disease quite yet. For example, we know that amyloid in the brain is a biomarker of the disease, but if we give you a drug that decreases amyloid in brain, will the amyloid released into the spinal fluid go up, down, or stay the same? It depends on if the drug is decreasing amyloid production, increasing its breakdown, or something else that’s not related to amyloid. It’s tricky.

And, it takes way too long for measures of cognition or imaging biomarkers to change during the testing of a diet or drug in a person with signs of Alzheimer disease. We don’t want to wait 5 years to know if grandma’s function is getting better. We want to know in four weeks. So, we need a biomarker of brain health. It’s a little bit of Catch-22 that until we have a good treatment for Alzheimer disease, we won’t be able to define the biomarker, but we need that biomarker to know what treatments or diet-based interventions help.

Where should patients and families look for the best information on how diet and lifestyle can help in preventing or modifying Alzheimer’s symptoms?

It seems like a simple question, but as a specialist in this area, I’m finding that there is little information out there to guide health care providers on what the best diet really is for the brain. Hopefully, diets that are helpful for inflammatory conditions will be helpful overall, but I think the best information for Alzheimer disease prevention does make its way onto the Alzheimer’s Association website. They have specific information on what ‘exercise’ and ‘Mediterranean diet’ really mean.

So, I counsel that the best-studied diet is Mediterranean. If you want to know best how to make your diet Mediterranean, it’s best to visit a nutritionist. At our clinic in the UW Memory and Brain Wellness Center, we’ve referred people to our senior care nutritionist, Karen Conger, and she helped patients consider their diet and what they could change. Doctors don't always have time  to do that.

It’s easy to find articles on the internet that suggest that coconut oil, turmeric, CoQ Enzyme 10, fish oil, or other supplements prevent Alzheimer disease. Is there a grain of truth here, or is most of this a waste of money and hope?

Supplements on the market may have the backing of laboratory data, but it’s often data from cell culture or mouse or rat experiments. A lot of the human studies have been disappointing when you look at the outcomes that really matter to patients, such as improved function, particularly in individuals who already have dementia. I think we have to wait for the best evidence and encourage studies that examine combinations of things.

I do want to say a special word about coconut oil. This particular supplement is getting a lot of press, not because of any science breakthroughs, but because a woman wrote a book, based on one report, which was her husband, and advertised it on a Christian Broadcasting network.  No data in the science world suggest that coconut oil can prevent or treat Alzheimer disease. In fact, a 2014 study in adult rats showed that a diet high in coconut oil may be harmful to the brain, compared to diets lower in saturated fat.  I think that occasional consumption of coconut oil and coconut is fine, but I would advise against taking high doses of coconut oil until there is actually scientific evidence to do so.

Ultimately, I think we will find compounds, or a combination of compounds, that treat or delay Alzheimer's disease and other dementias. But, I will also say that we humans have always tried to search for supplements to replace a nutritious diet and exercise plan, and so far, we have not found anything that does. The best evidence for preventing dementia and improving cognitive aging is a lifetime of heart-healthy diet and exercise. Even if you start later in life with these healthy habits, there is good evidence that these healthy routines can change your brain chemistry—even if you have the early sign of Alzheimer disease symptoms, called mild cognitive impairment.

The best evidence for preventing dementia and improving cognitive aging is a heart-healthy diet and exercise—even if you start later in life with these habits.