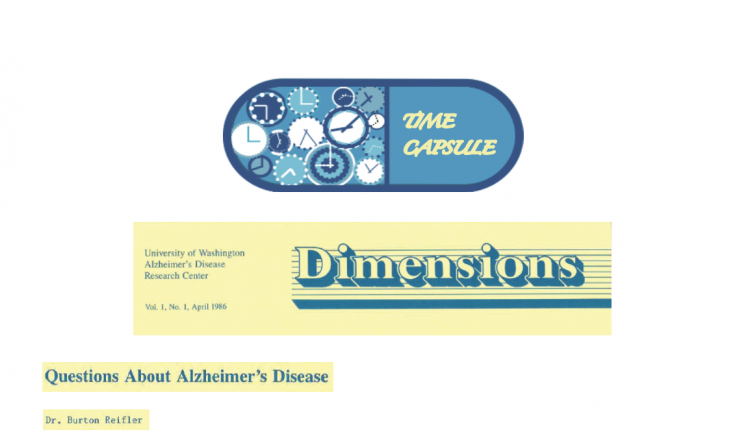 In the inaugural issue of ADRC’s Dimensions newsletter in 1986, this reader’s question was the very first to be answered by Associate Director Burton Reifler, MD, MPH, who was also Founding Director of the (former) UW Geriatrics and Family Services Clinic. This early reader asks: “I am confused about the difference between Alzheimer’s disease and senility. How can you tell them apart?” Looking back, with over three decades of clinical research under our belt, this question still gets to the heart of tricky issues about brain health and aging, but also reveals substantial progress. View the answer from 1986 and join us as we reflect on how clinical researchers at the ADRC-affiliated UW Memory and Brain Wellness Center would update that answer with the most recent knowledge and a prescription for action and hope!

“You can’t tell Alzheimer’s disease and senility apart, because in most cases, they are one and the same. At one time, it was thought that 'senility' was simply a normal part of getting older. At that time also, we thought that Alzheimer’s disease applied only to an individual under age 60 who had the slow, progressive loss of mental ability so characteristic of the illness. If the person had the same symptoms and was over 60, we called it 'senility'. We now know that mild forgetfulness, such as not remembering names, can be quite normal. Significant, sustained forgetfulness is a disease. Alzheimer’s disease now refers to all individuals, regardless of age, who are subject to the slow, progressive deterioration of their mental functioning.” −Dr. Burton Reifler, 1986

Indeed, as Reifler notes, the word ‘senility’ was commonly used in past decades to label elderly individuals who showed signs of severe cognitive impairment. Today, the medical community defines that condition as ‘dementia’. Through massive improvements from decades past, the field has better diagnostic tools to clarify whether Alzheimer’s disease is playing a role in a person’s symptoms. It is also now possible to make early diagnoses to help families adapt and plan for the future while they are still able.

But, that readers’ inquiry in 1986 is still relevant today—It’s just asked with different language: ‘What’s the difference between “dementia” and “Alzheimer’s disease?” remains a befuddling question to this day−and our Director, Thomas Grabowski, MD, has made it his mission to provide an answer that makes sense to everyone and fundamentally reframes how the public thinks about these issues of brain health and aging.

Grabowski, a neurologist at the UW Memory and Brain Wellness Center, often starts his public science talks by clearing up a “fundamental and pervasive confusion in our society and the medical community between Alzheimer’s disease and dementia.” The distinction between these two terms has wide-ranging implications. In short, Alzheimer’s disease names the biological process by which amyloid plaques and tangles of tau protein build up in the brain’s medial temporal lobe and eventually spread throughout the entire brain. This process is often accompanied by vascular damage and other proteins, especially in very old people. Only in later stages of the disease does a person become dependent on the care of others to perform activities of daily life, a clinical state called dementia. Importantly, not all cases of dementia are caused by Alzheimer’s disease or related pathologies; other less common neurodegenerative diseases, such as frontotemporal degeneration and Parkinson’s disease, can also lead to dementia.

For perspective, while 1% of people aged 65 have Alzheimer-type dementia, 25-30% of adults aged 65 will show amyloid build-up in PET scans at least 15 years before the onset of dementia symptoms. According to the National Institute on Aging, the prevalence of clinically diagnosed Alzheimer’s disease doubles every 5 years beyond age 65. Some people with these signs of pathology escape developing symptoms during life, and researchers are now on the hunt for the genes or aspects of life history that contribute to this resilience. 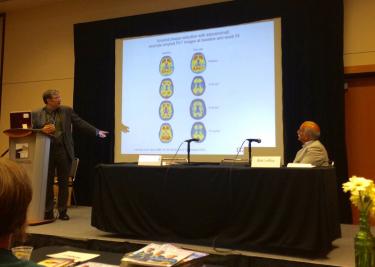 “So, if our plan is to advance the day when we prevent these threats to brain health, we really are going to have to intervene early, either with a strategy of primary prevention based on identification of early amyloid burden and genetic factors, or secondary prevention methods to treat early symptoms,” says Grabowski.

In Grabowski’s reframing of Alzheimer’s disease, the long presymptomatic phase becomes a wide window during which lifestyle changes in exercise and other heart-healthy behaviors, and eventually, future therapeutics, can help improve or maintain cognitive function or delay dementia onset for many

years. In fact, the Lancet Commission on Dementia Prevention, which uses research from the UW Adult Changes and Thought Study, documents that not smoking and managing conditions such as obesity, hypertension, diabetes, hearing loss, and social isolation can help prevent dementia. In 2020, new additions to the list of preventable risk factors include head injury, heavy alcohol use, and air pollution exposure.

At the UW Memory and Brain Wellness Center clinic, our focus goes beyond slowing or preventing dementia; we take a strengths-based approach to helping people with early symptoms of memory loss find ways to leverage areas of strength that remain intact in the midst of decline. “The vast majority of older adults over 65 with early to mid-stage dementia symptoms typically have the capacity to live meaningful and engaging lives for many years in spite of the impairments,” says Grabowski.

The aim to maximize the impact of strengths-based approaches to memory loss motivates certain unique areas of emphasis in our clinic. We are engaged in efforts to improve dementia diagnosis education for primary care physicians, so more people can access diagnosis and resources without referrals to specialty neurology centers. The clinic advocates for people living with memory loss and their families to participate in local dementia-friendly programs.