Over the past seven million years, mostly in the past two million, the human brain has tripled in size and increased in cellular complexity. This phenomenon supported our species’ growing capacity for language, problem-solving, walking upright and many other abilities critical to navigating demanding environments. But it hasn’t come for free. For modern humans, there’s a price to pay for this rapid brain development—our vulnerability to certain medical conditions.

“It’s not a coincidence that areas of the body that have undergone more recent evolution are also the areas of the body where we tend to see more human-specific disease. Researchers have been able to connect a lot of particular human-specific gene variants to conditions such as knee pain, low back pain, but in particular, neurological disease,” says Meredith Course, PhD, postdoctoral fellow in the UW Valdmanis Lab, Division of Medical Genetics, who is the lead author of a new study published in the American Journal of Human Genetics that lies at the intersection of genetic sequencing technology, human evolution, and the progressive motor neuron disease amyotrophic lateral sclerosis, or ALS, which affects 30,000 Americans. 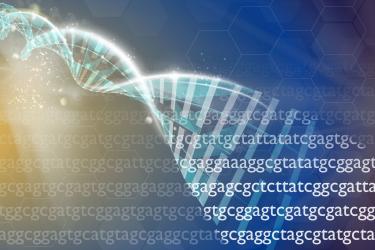 The study adds evidence to a hypothesis that while the ancestral human brain expanded over millions of years, parts of some genes related to brain function and behavior expanded in the population as well—literally—growing longer. In rare events, over evolutionary time periods, some of these regions of the genome continued to expand in our ancient relatives, by adding on copy after copy of a repeated segment of DNA nucleotides within the particular gene. In the modern human population, some have continued to lengthen, even to the point of causing disease. While extremely uncommon, more than 40 so-called ‘tandem repeat expansions’, are currently known to cause or increase risk of neurological diseases, such as ALS, in people who carry an expansion with too many copies in it.

Tandem repeat expansions, along with other types of gene mutations, so far explain about 60% of familial (inherited) ALS and 5% - 15% of sporadic cases, meaning cases with no known family history of the disease. Yet, scientists grapple with a problem of “missing heritability”, believing that other risk factors, or combinations of several genetic and environmental hits together, account for many more sporadic ALS cases, based on twin studies for example.

With this problem in mind, the UW Valdmanis lab and collaborators from the UW ADRC set out to search for more potentially pathogenic human-specific repeat expansions, aiming to build a more complete atlas of ALS risk factors, as well as to address the hotly debated topic of how repeat expansions grow longer.

By first estimating repeat lengths within DNA sequences in whole genomes from sporadic ALS cases, the researchers found a repeated sequence within the brain-related WDR7 gene. They confirmed that the average human typically carries in the range of 14 copies of the repeat; they also observed a wide variation in number of repeat copies in their ALS study population, so they knew they had a promising repeat to further assess for a link to disease.

The team used a third-generation genetic sequencing technology capable of reading entire stretches of long repeated DNA sequences, which are impossible to capture with existing whole genome sequencing tools. Performing the first ever application of ‘long-read sequencing’ in DNA samples from ALS cases, they examined this repeat in WDR7 in 367 sporadic ALS cases, normal controls, Parkinson’s cases, and Alzheimer’s cases from the UW ADRC. With the long-read sequencing technology, the team found that a higher copy number of this newly identified repeat is significantly associated with ALS risk. The longer the repeat, beyond about 30 repeat copies, the more likely it is to contribute to ALS susceptibility. In their study population, individuals carried just a few copies up to 86 copies.

The researchers see the study as a sign that the ALS field is on the verge of discovering more genetic risk factors with this new technology. “The work opens the door for a completely new perspective on what type of genetic variants can cause or modify ALS susceptibility,” says senior study author Paul Valdmanis, PhD, assistant professor in the UW Division of Medical Genetics. “We are setting the stage to guidelines on how to identify repeat expansions by long-read sequencing technology.”

Because this technology can capture the full length of a repeat expansion, from the very start to the end, the researchers were also able to learn many secrets about the mechanism of the expansion and how it has evolved in the human species. Using available samples of ancient human DNA, they found that the repeat expansion in the WDR7 gene first appeared after the major evolutionary split between our Neanderthal and Denisovan ancestors, between about one and six million years ago. This finding suggests that this expansion is relatively new in human evolution and possibly played a helpful role in human brain development. 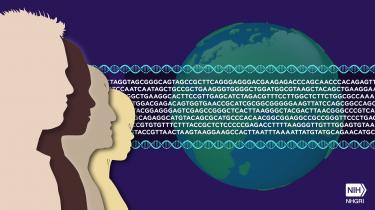 They then looked in modern day human genomes representing different world populations, including individuals with Han Chinese, European, and African ancestries. Making a colorful plot (shown above) to visualize the long-read sequencing data from all the individual genomes, they were surprised at what they could see. “We observed all of this really cool patterning of clusters of repeats in the expansion and population-specific variability,” says Valdmanis. “What blows me away is that the pattern is variable across populations, but the pattern is fixed in related individuals, showing it’s passed down in a very organized manner.” Because of this population-specific variability, the team was able to document that nucleotides have been added only to one end of the expansion, growing in one direction, which has never been demonstrated before for a repeat expansion. They saw that the pattern of repeats on the growing end, or ‘leading edge,” of the expansion has become more and more different between world populations over time, creating a unique stamp of ancestral origin. “This is a living, breathing part of the genome, and it’s continuing to evolve,” says Course.

“We were galvanized by the idea that we could simultaneously uncover this expansion’s contribution to neurological disease risk, while also finding the origin of expansion, which unites the areas of human evolution and human disease,” she says. “It's unusual to find one piece of the genome that can answer two kinds of questions at once.”

The Valdmanis lab has plans to work with collaborators in China to sequence their local cohorts of individuals with ALS and controls. “We will look for population-specific repeat elements to find whether there's a particular DNA backbone that is susceptible to expansion,” says Valdmanis. Going forward, the team will work to determine the mechanism that leads to ALS susceptibility in people who inherit an expansion with too many copies—perhaps better thought of as the legacy of the biological forces driving the evolution of the human brain itself.

ADRC Awards for New Ideas in Alzheimer’s Research: Learn about the newly funded 2020-2021 ADRC Development Projects. These awards encourage investigators to use ADRC resources to advance the understanding, diagnosis, or treatment of Alzheimer’s disease.