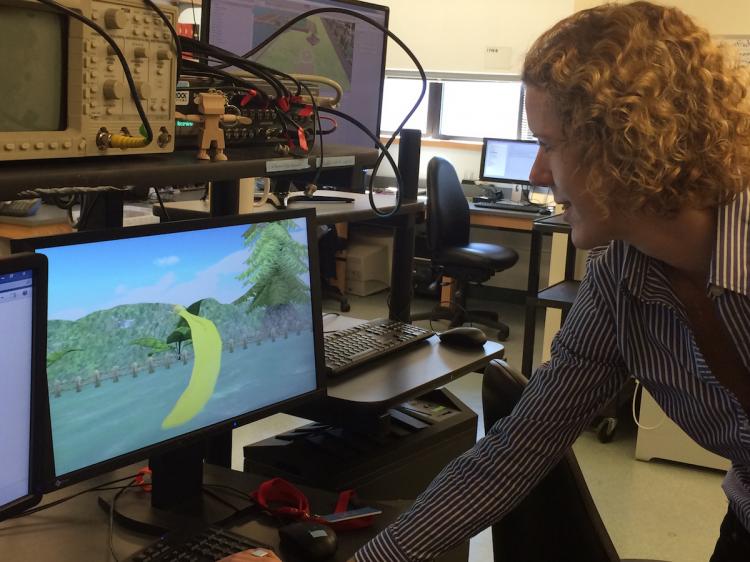 Researchers are studying memory formation in the primate brain—and finding clues to interventions for Alzheimer's disease along the way.

*Parts of this story appear in the May/June Issue of The Bulletin | King County Medical Society. View Article PDF

Giuseppe sits in a small room playing a videogame, joystick in hand. He zooms through a grassy field, foraging for big yellow bananas. Banking left, he speeds along a stonewall and captures two. A sweet treat rolls down a tube into his mouth, and he munches on his reward. Giuseppe, a monkey, is a research participant in the Buffalo Lab at the University of Washington.

In the lab next door, researchers watch a thin yellow line zigzag across a computer screen, with a loud crackling sound. “That’s the sound of a neuron firing an action potential,” says graduate student Seth Koenig, who is recording the activity of single neurons in the monkey’s brain, via a hair-thin electrode implanted into the medial temporal lobe. A camera setup tracks his darting eye movements.

Along with four other monkeys trained to play various computer games, Giuseppe is helping researchers to figure out how the primate brain forms memories—and find clues to interventions for the memory impairments of Alzheimer disease along the way.

Humans and monkeys have very similar brain anatomy, making the primate brain a valuable model of human neurobiology. We also share the ability to perform very complex behavioral tasks. In fact, this macaque monkey can play a more difficult version of this game. He enters the same green field, and discovers it's been cleared of bananas. There's a reward only if he can navigate back to the spot where a banana had been, at which point the banana will reappear. 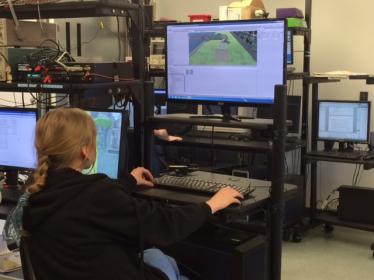 “To successfully remember the banana’s location, he must pay close attention to where he is in his environment,” says Beth Buffalo, Associate Professor in the Department of Physiology and Biophysics, who designed these videogames for monkeys and has worked with monkeys in the lab since high school. “He needs to get a sense of where the banana is relative to his position and use the landmarks to help guide him.” By doing so, Giuseppe will successfully encode a memory, which he can use later to retrace his steps to the invisible fruit’s location.

The monkey's ability to complete such a navigational memory task may hinge on a particular type of neuron, a "grid cell," found in the medial temporal lobe. Grid cells may help our brains to create representations of newly encountered environments, known as "cognitive maps." Buffalo thinks that these maps help us remember the dimensions of a physical space, and also aspects of time and sensation—how long it takes to get around, and sights and sounds we find there, for example. This comprehensive record of new experience helps us to plan out future trips.

Wandering Off the Grid

The medial temporal lobe, in humans, also happens to be the first spot where the tangles of Alzheimer’s disease pathology build up and, eventually, kill neurons. This disease rips apart a lifetime of cognitive maps, explaining why a person's first clinical symptoms often begin with trouble finding his or her way home from the grocery store, or even around the house. Indeed, new research from the German Center for Neurodegenerative Diseases found significant impairment in grid-cell function in healthy college students who carry a risk factor for late-onset Alzheimer's disease, the APOE4 allele, decades before potential symptoms.

"In order to understand what might be missing or impaired in humans with Alzheimer's disease we need to understand how the memory system works at a deep level," says Buffalo. "We hope to model the processes of healthy cognition, reflected in eye movements and brain function, which can then be differentiated from impaired cognition."

To this end, the Buffalo Lab team has found several biological markers of memory formation in the brain. Specifically, these are distinct patterns of neuron firing and eye movements that predict a monkey’s success or failure in a memory task. Aligned with the focus of the UW Alzheimer’s Research Center (ADRC), Buffalo’s ultimate goal is to translate these cognitive biomarkers into ways to identify signs of memory loss in people, even when there are no noticeable symptoms — a development that would open a window for intervention. Actually, she’s coming very close to doing so.

Eyes on the Prize

Back when she ran her lab at Emory University, Buffalo and her colleagues learned that the primate hippocampus in the medial temporal lobe plays a key role in guiding the eyes around a scene, based on memories of a prior viewing. Because Alzheimer disease in humans targets the hippocampus, Buffalo reasoned that signs of developing disease first appear in eye movements. Specifically, people with mild cognitive impairment would look around an image differently than normal controls, just like monkeys with damage to the hippocampus.

Buffalo and her colleagues designed a computer exercise to assess memory function and detect impairment in humans via eye tracking. In a 5-year NIH-sponsored study, published in 2013, this task predicted whether participants with mild cognitive impairment would worsen within four years. Surprisingly, poor performance on the first round of testing predicted cognitive decline, even in individuals in the healthy cohort.

“That result got us interested in the possibility that this non-invasive behavioral diagnostic tool detects hippocampal abnormalities associated with Alzheimer disease and can predict cognitive decline,” says Buffalo, "and it only requires a laptop camera.”

Fast-forwarding to 2016, Buffalo serves as Co-founder of a company called Neurotrack, the developer of a 5-minute computer-based visual test of memory function in humans. Neurotrack plans to make Imprint™ available for routine clinical use, potentially providing a quick, easy, affordable way to detect the very earliest manifestations of dementia. The goal is to empower the test-taker. A person would receive a personalized risk assessment in the doctor’s office, and information about lifestyle strategies to maintain cognitive function or a new targeted therapeutic.

For now, Giuseppe just has to keep finding those bananas. —Genevieve Wanucha