Welcome to the Alzheimer's Disease Research Center at the University of Washington!

The UW ADRC, and our colleagues at Partnerships for Native Health at Washington State University, are invested in an effort to reach out to American Indian, Alaska Native, and other Indigenous communities in the Pacific Northwest, in order to provide resources to people struggling with memory loss and educational materials to local clinic staff. We hope to improve the wellbeing of people living with Alzheimer's disease and other forms of dementia, and caregivers, as well as create opportunities for you to participate in a research study. This website includes notices of Indigenous Aging educational talks and outreach events hosted by the ADRC and Partnerships for Native Health. Visit often for news and changing content.

We invite you to watch this short educational film about living with dementia and Alzheimer’s disease, produced by Sky Bear Media, a local Native-owned film company. The film is a collaboration between the ADRC and the Partnerships for Native Health.

On this website, you will find caregiving resources and information for Native Americans and Alaska Natives, as well as Natives Care materials and presentations for clinic providers and community representatives working with Native communities. Please visit the pages tailored to the following groups:

What are Dementia and Alzheimer’s Disease?

“Dementia” refers to memory and thinking problems, including memory loss and difficulties making decisions and speaking. It can interfere with someone’s ability to live independently. A key point is that dementia is not a normal part of aging. Dementia is most common in older adults and has many causes. Alzheimer’s disease is the most common cause of dementia. About 5 million Americans have Alzheimer’s disease, and by 2,050 experts believe this number will almost triple to 14 million.

Doctors and scientists do not know why people develop dementia and Alzheimer’s disease. Risk factors include getting older, having heart disease, and diabetes. There are certain lifestyle factors that can reduce your risk of developing Alzheimer’s disease such as daily exercise, eating traditional foods, sleeping well, and staying socially engaged. However, these risk and protective factors probably don’t act the same way in different racial and ethnic communities. Therefore, it is very important to understand the risk and protective factors for dementia and Alzheimer’s and dementia in your community.

What is Mild Cognitive Impairment?

Mild Cognitive Impairment (MCI) is an early stage of thinking and memory problems. During this phase, individuals or their family members may notice subtle changes in daily living, but people with MCI are typically able to work and live independently. This phase is when we encourage people to talk about memory loss with their doctor and develop a plan.

Why is this Important?

Upcoming! On Day 1 of the Collaborating for a Dementia-Friendly Washington: Expanding Possibilities Conference- Sept. 14, 2021, will feature a virtual break out session (Session 1B 10:45 – 11:45 am) titled, Indigenous Perspectives on Dementia and Dementia-Friendly Communities. Moderator: Ka`imi A. Sinclair, PhD, MPH. Associate Professor, Institute for Research and Education to Advance Community Health (IREACH), College of Nursing, Washington State University.  Panelists will explore many questions, such as: What are Indigenous perspectives of dementia? How does Indigenous culture inform what a dementia-friendly community might look like? What cultural practices or formal programs support and respect the inclusion of elders, including those with memory loss? Explore these themes and more in a panel discussion with experts from Indigenous communities. Learn more and find the full conference schedule. Register here, and sign up to attend for Breakout Session 1B.
NEW WSU IREACH's Dr. Gary Ferguson is featured in the Spring 2021 Indigenous Aging Brain Health Series: Meet Dr. Gary Ferguson: “Lifelong Learner, Wounded Healer” A Conversation on Traditional Foods, Ways of Healing, and Indigenous Elder Wisdom
Movement is Medicine! Seattle Indian Health Board is offering a 4 week exercise series to practice wellness and physical activity! It's meant for Native youth, but these guided workouts may be valuable, energizing, and adaptable for any age group. Take part by enjoying these videos! 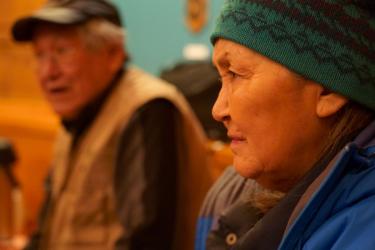