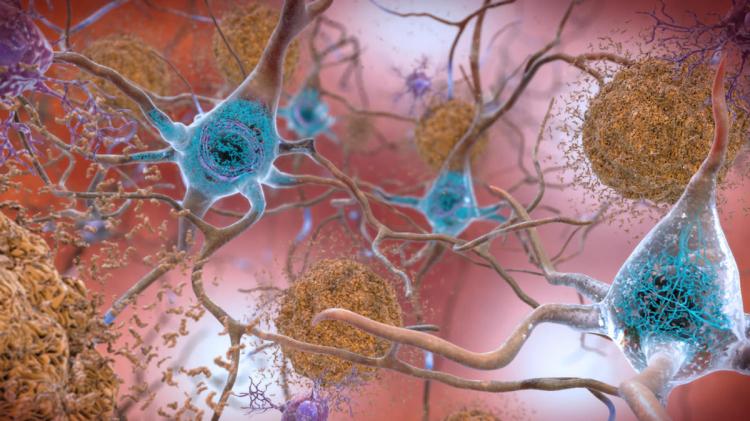 The hallmark Alzheimer’s pathology amyloid has taken the spotlight this month, after FDA approval of the first drug to have a biological effect on the abnormal protein. Tau is another substance that builds up in the brains of people developing Alzheimer’s disease as well as other neurodegenerative diseases called tauopathies, including corticobasal degeneration and types of frontotemporal degeneration. Previous studies have shown that abnormal tau burden correlates strongly with cognitive decline in Alzheimer’s disease patients, while amyloid does not, making tau a prime therapeutic target.

“Alzheimer’s is a disease of both amyloid plaques and tau tangles,” says Brian Kraemer, PhD, a professor of medicine in the Division of Gerontology and Geriatric Medicine at the UW School of Medicine. “I think we must address both pathologies to see a therapeutic benefit for patients in terms of improved cognition.” 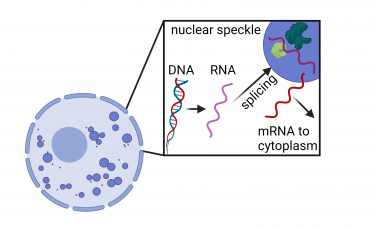 Yet, drugs that successfully target tau have been hard to design because so many questions about precisely what tau pathology does to harm cells remain unanswered. Now, UW ADRC researchers are contributing to a new, fast-moving area of research, revealing that tau pathology interferes with a fundamental mechanism of genetic expression called RNA splicing, by which cells ultimately produce needed proteins.

Genetic messages stored in the cell nucleus, called messenger RNA, need to pass through little gel-like organelles called ‘nuclear speckles’ to undergo RNA splicing before they are ready to exit the nucleus and create proteins. In a study published in Acta Neuropathologica Communications in June, the Kraemer Lab and the UW ADRC Neuropathology Core team provide evidence that tau pathology messes with all aspects of speckle function in the later stages of Alzheimer’s disease.

What’s going on with nuclear speckles?

The study, led by the Kraemer Lab’s Pamela McMillan, PhD, a research scientist in the Department of Psychiatry in the UW School of Medicine, relied on post-mortem autopsy brain tissue from UW ADRC and the Adult Changes in Thought Study participants, via the UW Medicine Biorepository and Integrated Research (BRaIN) laboratory. The analysis included samples from 29 participants with confirmed Alzheimer’s disease and 7 age-matched cognitively normal participants.

To locate the nuclear speckles, the team stained the tissue with a marker for the well-known nuclear speckle protein called SRRM2, without which speckles cannot function. Viewing the tissue under a powerful microscope, they observed a surprising phenomenon. In 20 out of the 29 brains affected by Alzheimer’s, SRRM2 protein was missing from the nucleus and instead lay floating among debris in the cytoplasm, or the liquid surrounding the nucleus.

“It was like night and day,” says Kraemer. “If you look at a normal case, you see nuclear speckles, and in the Alzheimer’s brains, the speckles are gone. Something has wrecked this relatively orderly RNA processing machinery and thrown all the SRRM2 protein out in a big junk pile in the cytoplasm.” What’s more, the team saw that this disruption was happening in the same places in the brain that tau tangles accumulate in Alzheimer’s disease.

In the May 2021 issue of Neuron, their colleagues in the Parker Research Group at University of Colorado Boulder published their findings about mechanisms by which tau pathology dismantles nuclear speckles and interferes with RNA splicing, from work in cell and mouse model systems and a small number of human tauopathies. “They describe what we've been seeing for years, but couldn't really fully explain,” says Kraemer. “However, the work from both groups appear fully consistent and clearly spotlight important open questions about how tau pathology contributes to the disease process.”

The UW analysis also found that the human cases with SRRM2 protein mislocated to the cytoplasm also showed a heavier burden of tau pathology and an earlier age of symptom onset during life. 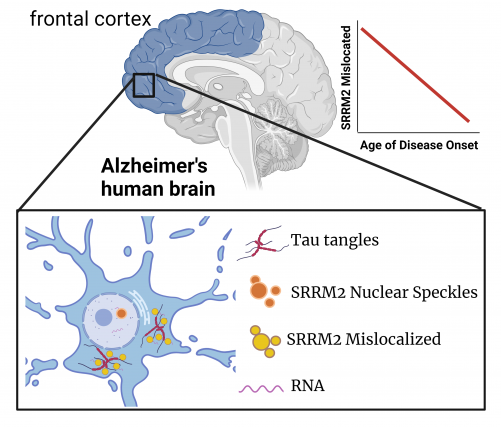 To make sure that tau pathology was the cause of this disarray and not something else, the Kraemer Lab turned to a mouse model of tauopathy. They found that the more tauopathy progressed, the greater the mislocalization of SRRM2 out of the nucleus, showing evidence of a direct consequence of tau pathology.

“One of the most interesting things about this study for me was how nicely the human data supported the animal data,” says UW ADRC neuropathologist Caitlin Latimer, MD, PhD, assistant professor in the Department of Laboratory Medicine and Pathology at the UW School of Medicine, and a co-author of the study. “Model systems can often tell a really clean story, and then you move into humans and things get more complicated. Here we saw a good correlation between the two that underscored the impact of combining the basic science with the more translational human tissue studies. From a scientific standpoint, prior to this study, I was not really aware that tau pathology could potentially have such an impact on RNA-mediated cellular dysfunction.”

Beyond SRRM2, the architecture of nuclear speckles involves about one hundred proteins. It turns out that one of these nuclear speckle residents is MSUT2, a protein that the Kraemer lab has been studying for over a decade because of its potential role in tau biology and disease. In a 2019 study, the team showed that MSUT2 and PABPN1, both nuclear speckle proteins also become depleted in cases of severe Alzheimer’s disease. The new speckle study has brought MSUT2 to the attention of the field.

“This work [from the Kraemer Lab] builds on our work in model systems and a small number of human tauopathies and demonstrates the findings in a larger cohort of 29 Alzheimer's patient brains,” comments Evan Lester, MD/PhD candidate at UC Boulder and lead author of the Parker Group study. “Further, they find a correlation between SRRM2 cytoplasmic localization and MSUT2 depletion in the nucleus. This could suggest a possible mechanism whereby MSUT2 exerts its effects on tau pathology through interacting with nuclear speckles and possibly SRRM2 itself. Further exploration of the interaction between tau and speckle components could yield exciting insights into Alzheimer's and tauopathies more broadly.”

Excitingly, the MSUT2 gene and its protein MSUT2 show promise as a therapeutic avenue. Kraemer and his team previously showed that knocking out the MSUT2 gene in mice prevents the formation of tau tangles. This lessened learning and memory problems caused by abnormal tau, suggesting that targeting MSUT2 or similar gene might serve to protect nuclear speckles in people living with Alzhiemer’s disease.

In light of this progress in understanding nuclear speckle dynamics, Kraemer thinks that the Alzheimer’s field needs to refocus some of its efforts on tau. “I think this research is telling us that we need to pay more attention to the RNA binding function of normal tau and its contribution to disease, because it seems like we can protect against disease processes by targeting RNA metabolism in ways that we don't fully understand yet.”

Towards an Ecology of the Aging Human Brain: The Shared Project of the ACT Study and UW ADRC - UW ADRC / Memory and Brain Wellness Center

Discoveries Made Possible By You - Spring 2021 - Explore some of the studies that used data from research participants in the UW ADRC or the Adult Changes in Thought Study and were made possible in part by funding from the National Institute on Aging. - UW ADRC / Memory and Brain Wellness Center